The Biggest Cheats in Sporting History 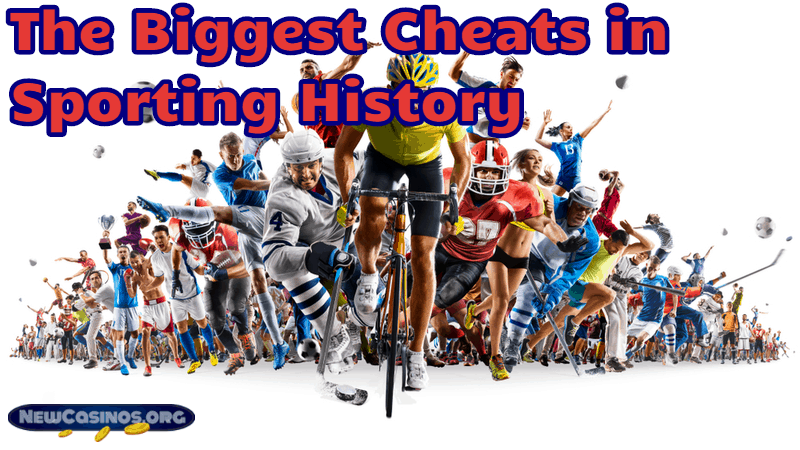 If you haven’t had enough of lockdown by now, then you’re probably a highly functioning hermit in real life. No matter how much time you’re spending at new casinos or the best live dealer casinos (as long as you are doing it responsibly), there comes a time when you feel a passion for something … real …

Perhaps you’re not self-isolating alone, and you’re with family and/or friends. Are you playing games with them? If so, are you an honest player, or do you like to … ahem … cheat a little? If you are playing Monopoly, do you grab a £500 note from the bank when no one is looking? Perhaps when you draw the letters out of the bag when playing Scrabble, you quickly rub a finger over the surface of each tile to see if you can find a lovely blank?

If so, then you’re a cheater, but don’t be too hard on yourself as cheating at Scrabble or Monopoly can’t compare to the scandals, we are about to inform you about. Here, courtesy of our casino blog, are some of the biggest cheats in sporting history.

One of the most famous cheating scandals of all time took place in America and involved that nation’s national pastime of baseball. At the time (the 1910s) the US was experiencing problems with crime syndicates in many walks of life, but it was thought that the ‘wholesome’ sport of baseball remained free of such deviousness.

It came as a huge shock when, in 1919, hot favourites the Chicago White Sox were beaten 5-3 over eight games by the unfancied Cincinnati Reds. It came as an even bigger shock when the White Sox were investigated, and it was discovered that hitter Chick Gandil had convinced his talented teammates to throw the series to allow mobsters (and the players themselves) to win cash by wagering on such an unlikely outcome.

Eight players were banned for life including legendary hitter ‘Shoeless’ Joe Jackson who continually persisted that he was not part of the game-throwing crew. The White Sox – World Series champions in 1906 and 1917 – did not win the World Series again until 2005. Jackson passed away in 1951 having never played the game professionally again following the tainted 1919 event.

The ‘Hand of God’

There is no doubt that Diego Maradona will be remembered as one of the best football players the world has ever seen; however, his most famous (or infamous) goal came about via an illegitimate means.

Argentina was playing England in the 1986 World Cup quarter-final. On the 51st minute, a skewed clearance from England’s Steve Hodge ballooned into the penalty area where Maradona jumped for the ball against England keeper Peter Shilton.

Who would win this duel? Shilton – 6ft tall (who can use his hands) and regarded as one of the best keepers in the world or 5ft 5in Maradona? Of course, it was … Maradona who knocked the ball over Shilton and into the net.

Everyone had seen that Maradona had raised a fist above his head and punched it over Shilton … everyone of course except referee Ali Bin Nasser who awarded the goal. Argentina won the game 2-1 and advanced all the way to the final.

Post-game Maradona even admitted that he had cheated, claiming that the goal had been scored by the ‘hand of God’.

Fred Lorz was one of the best long-distance runners around in the 1900s. When he lined up to compete in the Marathon at the 1904 Olympics, he was widely expected to be among the front runners. It, therefore, came as no surprise when Lorz sprinted into the stadium to take the gold medal, what was surprising though was Lorz’s time of three hours and 13 minutes, and the fact that he was so far ahead of his competitors. Oh, and the small matter that he failed to pass the half-way checkpoint.

Lorz admitted that he had run out of steam after nine miles, after which his manager had picked him up and driven him to the 20-mile mark. Lorz then completed the race in the first place. He said he did this as a ‘joke’ with the full intention of coming clean. The Amateur Athletic Union did not see this as a joke and banned Lorz for life.

The ban was lifted a year later, and it turned out that Lorz was an amazing long-distance runner after all – he won the Boston Marathon legitimately in 1905 in the stellar time of 2:28:25.

Sadly, Lorz passed away in 1914 from pneumonia at only 29 years of age.

Let’s end with another baseball scandal, although this one ruined a fledgeling career as opposed to ending many established ones as with the ‘Black Sox’ scandal. Children’s baseball in the US is a huge deal with a national youth organisation called ‘Little League’ in which any team from any part of the country can end up playing in the Little League World Series live on national TV.

In 2001 one team began to dominate the race for the title – the Mid-Atlantic Little League team. One player, in particular, stood out – pitcher Danny Almonte who was by far the best young player of his age (12) in the world. Would Almonte turn out to be the next MLB phenom?

As it turned out, Almonte had a slight advantage over his team-mates. When asked to produce his birth certificate, it turned out that Almonte was actually well on his way to being 15, and not 12 as he was supposed to be. He was banned from the tournament, and the Mid-Atlantic Little League had their entire record expunged from the competition.

There is one common aspect of all these tales – cheats never prosper! Why not strike ‘cheat’ from your gambling glossary and have fun instead? Oh, and if you do play online after reading our online casino reviews, make sure that you do so responsibly!