How Long Can Online Gambling Survive? 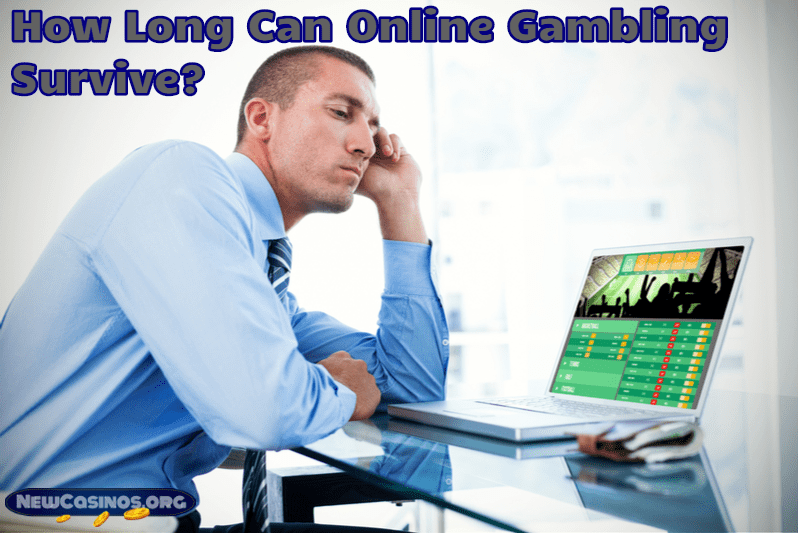 Go back a handful of years, and everything looked rosy in the online gambling sphere. Sure, there were some problem gamblers, but no one is saying that all alcohol should be banned just because a proportion of the world’s population are alcoholics. While no one is saying the gambling should be banned, more and more jurisdictions are putting clamps into a place that are surely designed to make online gambling so unrewarding that no one will want to bother.

The current situation in the UK is a perfect example. For years online gambling was not a problem in this gambling-friendly nation. The people of the UK have always loved a flutter, whether it be at the bookies, doing the (largely now defunct) football pools, buying a lottery ticket or scratch card or heading down the local casino or bingo hall.

True, the UK government were slow to act upon any potential pitfalls of online gambling. Existing UK gambling authorities largely governed gambling over the internet, but the people in charge decided that all forms of gambling needed tighter regulations, and so in 2015 the United Kingdom Gambling Commission was formed.

Ever since its creation, the UKGC has been criticised by both pro-and anti-gambling advocates.

The UKGC has also come in for criticism from both gamblers and lobbyists against online gambling, or gambling full stop. The current attitude of the UKGC seems clear – it’s remit is not to rest until gambling has been placed in a coffin and buried deep underground. Each new rule the UKGC passes is another nail being hammered into this coffin.

If you are a gambler in the UK and you want to gamble online, you have to ‘put up’ with all of the following:

Many of these rulings are so ineffective they are laughable. For example, for the ban on credit cards, gamblers are simply using PayPal instead. When it comes to paying their PayPal bill, they use their credit card. The UKGC is powerless to prevent PayPal from allowing its hundreds of thousands of UK users to pay their bills on credit, and PayPal even has its own credit facility.

There are signs that the UKGC is going to make online gambling even harder. The VIP schemes run by the majority of online casinos are currently under scrutiny, with a working group set up to create new rules of how such schemes can be run. If the group cannot come up with a suitable compromise (as seems likely), then VIP schemes for UK customers will be banned outright.

It is part of the ridiculous nature of gambling regulation in the UK that while pokies, casino games and sports betting are seen as devils, lotteries are the angels. There is no problem it seems with anyone buying a lottery ticket in the UK, and even children as young as 16 are permitted to do so (the legal age limit for gambling in the UK is 18). Scratch cards can be easily purchased from newsagents and petrol stations in the UK, and without limitations.

Advertising the National Lottery can be done freely and with few limitations too. In a recent campaign, runners well told that they should ‘celebrate’ the end of their run by going out and buying a scratch card. It is hard to imagine the furore if a similar campaign was launched in which tennis players were told to celebrate winning a set by enjoying 100 10p spins on Starburst!

The UKGC has done little to regulate ‘loot box gambling’ as seen in video gaming.

Another concept that the UKGC seem hardly to be bothered about is so-called loot boxes in popular video games. Games such as Epic Games’ Fortnite, EA’s Apex Legends and the new Ubisoft Game Hyper Scape are all free to play but allows their players a chance of improving the way their chosen online characters look by making purchases.

Some ‘skins’ (as they are known) are expensive, so for a much cheaper alternative player can buy a loot box containing random elements in the hope that the box they buy contains the skin they are looking for … paying money for the hope of winning something by chance must be considered the very definition of gambling. What’s worse is that the purchase of such skins is much more common with children than the adults who can afford them and that younger players tend to buy loot boxes as opposed to specific skins.

It’s estimated that 300,000 people in the UK have problem gambling tendencies. If the UKGC decides to ban online gambling outright, it is worth considering that 100,000 people are employed in the industry in the UK. That gambling taxation contributes around £3 billion to the UK government every year.

While there’s no doubt the UKGC measures have prevented some problem gamblers from getting themselves into real trouble, many others are simply bypassing the UKGC regulations by using a VPN to play at non-UKGC licensed online casinos and funding their playing via Bitcoin.