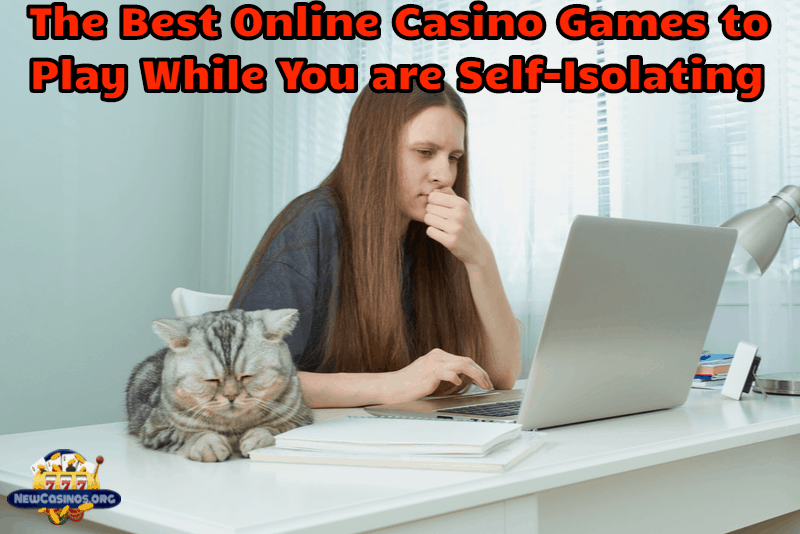 So far, 2020 is turning out to be an extraordinary year indeed. Who would have thought, at the beginning of the year, that a previously-unknown virus would spread throughout the world, impacting almost every single aspect of our daily lives, and causing a significant impact on the world’s finances? It all sounds like something out of the realms of science fiction, not science fact!

Most people are self-isolating on the order or suggestion of their governments, to help prevent the spread of the disease. If you can work from home, then that’s fine, but what if you cannot? How are you going to spend all this sudden free time?

One thing you can do while you are self-isolating is to play online casino games. Casino games are always entertaining and are great time-killers. Just remember to play responsibly – many games can be played for ‘free’ or ‘play money’ anyway, although you may have to sign up with an online casino before you can do so.

Here is a ‘playlist’ of the best in online casino games, as suggested by our casino games experts at NewCasinos.org.

Many people consider Starburst to be the best online video slots game of all time, and it’s hard to argue against that opinion. The NetEnt slot has been entertaining online casino game players for many years now, and is likely to continue to do so for years to come!

Starburst is a straightforward game to play. It’s a slot with five reels, three rows and ten paylines. As Starburst pays out both left-to-right and right-to-left, there are in effect twenty paylines. The reels are filled with brightly-coloured gems plus the slot’s two big winners – the ‘bar’ symbol and the lucky seven.

The game’s main feature is the expanding wilds on reels two, three and four. If you land a wild in one of those positions, it expands to fill the entire reel and triggers a re-spin. You nearly always win if you are lucky enough to land a wild, and the game gets really exciting if you land two wilds on the same spin, or even all three!

The sounds and musical choices of Starburst are also first-rate, making this a supremely entertaining slot.

Everyone knows how to play blackjack, but in case you don’t, it’s a case of you against the dealer to see who can get closest to 21 without going over. Unlike casual blackjack though in casino blackjack the dealer has to follow a particular set of rules when choosing whether to take more cards. Usually, the dealer has to keep drawing until they have reached a total of at least seventeen.

You can use your self-isolating time to learn how to play blackjack with perfect strategy. This is a way of playing blackjack so to minimise the advantage that the casino has over you. The casino will still come out on top in the long run, but with the perfect strategy, you can maximise your chances of hitting a profitable winning streak. Just remember to quit while you are ahead.

Three further golden rules of blackjack: Try and find a game that uses as few decks as possible (ideally, one), never take insurance, and never take blackjack side bets.

This gothic slot from Microgaming has won over plenty of slotting fans since its development and is likely to win many more the longer it is available. This game, created by Microgaming, has a massive 243 ways to win and is highly volatile. This means that long winning streaks are likely, but then again so are long losing streaks – you have to hope that fortune smiles on you when you play it.

The game takes place in a Transylvanian castle, and while on the surface this seems to be a slightly mundane slot, the side games make it a hugely entertaining slot to take for a spin. There are six side games in total, and the more you play, the more likely you are to unlock some of the big earners. There are all sorts of features, from shifting symbols to spreading wilds.

Once you have played Immortal Romance this game for a while and remained in the black, then the riches really can descend upon you. Remember though that no matter how long you play, the odds remain slightly stacked against you.

Sometimes it’s hard being a casual casino player and having to choose between slots and bingo. Did you know that you can play both at the same time? This is achievable thanks to Slingo, which is an innovative mix of slots and bingo.

Slingo works just like bingo, in that you are presented with a 5×5 bingo card with numbers from 1 to 75. The numbers are drawn in the usual way, though. They are ‘spun’ by the player via a type of slot machine. If a number that appears on the reel area of the screen is on your card, then you can mark it off. The game aims to complete as many lines of five numbers as possible before you run out of spins. The more lines you complete, the more you win.

To make the game more interesting, you can land more than numbers on the reels. You can win joker symbols that you can use anywhere, or on the column, the land under, coin awards or free spins that add to the number of spins that you have available. You can keep going until you’ve used your free spins, or pay to see out the final few spins available.

Four great games then to help you through your self-isolation phase. Everyone is in our thoughts here at NewCasinos.org as we all battle this global epidemic, and remember as always, to gamble responsibly.