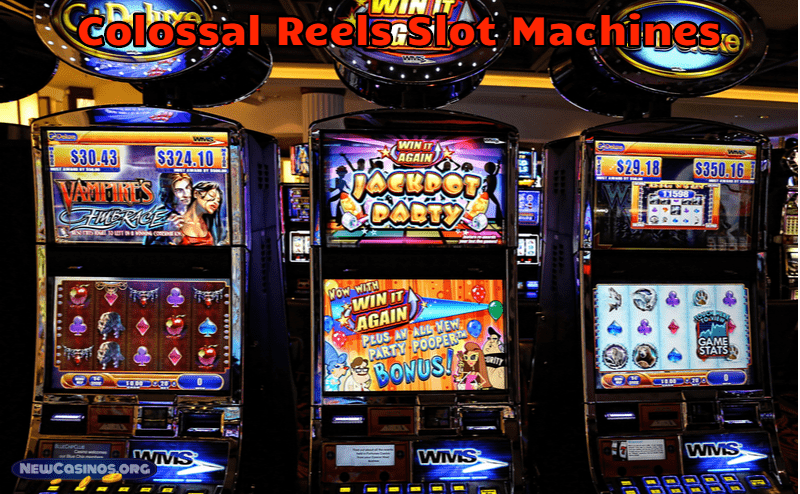 Plenty of the best online slots developers are coming up with innovative ways of making their online slots more attractive at new online casinos. If a company now puts out a ‘traditional’ slot with three reels and a single payline, then you can be sure of one thing – no one would play it!

Even five reels slots with 10, 20, 30 or even 40 paylines with wilds and scatters are being seen as being fit for the instant slots graveyard. Innovation is the key, with new slotting aspects being developed. For example, we now have the ‘MegaWays’ feature at the best online casinos as created by RealTime Gaming. Here, the number of rows on each of the six reels of a MegaWays slot is completely random, allowing for slots with astounding numbers of paylines – well over 100,000!

The MegaWays concept has proven to be so popular that countless other slot developers are leasing the idea of MegaWays and adding it to their own slot releases, such as SG Digital and their recent slotting release, Beetlejuice MegaWays.

There’s also now the ‘InifiniReels’ concept, which was thought up by the brainy slot boffins at ReelPlay. Here every time you land a win at New Zealand online casinos and elsewhere an extra reel is added to the original three, and if you land a fresh win, then another reel is added … and so on and so on up to infinity. This notion is considered such a brilliant idea that slots industry giants NetEnt have entered an agreement with ReelPlay so that they can use the Infinireels idea with their own slots. The first such NetEnt release – Gods of Gold: Infinireels – landed within the slotting realm in April 2020.

However, when we look for the origins of any unique aspect of a slot, we have to award the prize for the original instigator to WMS, as their ‘Colossal Reels’ feature has been around a lot longer than MegaWays or InfiniReels. The rest of this blog post will tell you all you need to know about WMS and Colossal Reels slot machines.

Who, exactly, are WMS?

WMS is one of the longest-established slots makers in the world. They were founded in 1943 as the Williams Manufacturing Company and made pinball machines. They eventually began to make slots too and in the mid-1990s switched entirely from pinball to slots, and in 2000 began to develop online video slots for USA online casinos.

WMS competed with IGT in the USA in the battle for the crown of the nation’s leading provider of video slots. After years of profit, the company’s finances took a hit in 2012 following restrictions to online gambling in the US that were put in place. In 2013 WMS was sold to Scientific Games for $1.5 billion. Scientific Games (now known as SG Digital) maintain the WMS branding when releasing some of their online slots.

Once you have joined WMS online casinos, you will immediately notice the colossal slots courtesy of their distinctive two reels. If you have never played colossal reels before, you should consider starting with the free option to learn the ropes. Once you have gained confidence, then you can go for the top prize.

What are ‘Colossal Reels’ slot machines?

Colossal Reels slot machines are so-called as they have the potential to have a colossal number of spinning reels! Each game that has been treated with the Colossal Reels concept has the standard five reel, three or four-row arrangement, plus also; it has a second set of five reels with a dozen rows. This leads to the chance for players to try their luck in winning with a video slot that maxes out at one hundred paylines!

How Slots with Colossal Reels Work?

Slot machines with colossal reels offer 100 ways to win, and they comprise of stacked symbols which enhance your chances of winning. They also allow you to increase and decrease the number of active pay lines you are operating. To get a better understanding of how these slots function, we’ll use WMS Spartacus Gladiator of Rome for illustration purposes. Once you open this game, you will notice that the main grid has 5×4 reels. And at the grid on the left, you will find 5×12 reels. This colossal layout was introduced in the conventional casinos in the U.S. and has changed the gambling landscape by helping reshape the mindset of operators and developers.

Colossal reels have proven to be some of the most mind-boggling features in casino gaming. The two reels not only improve the game but also, they increase your chances of winning. However, it is important to bear in mind that just like in any other game, playing colossal reels comes with advantages and disadvantages. The main advantage of this game is the double reels which double your chances of winning. Unfortunately, there are only a few platforms to play colossal reels, and they have a low 95% RTP (return-to-player). Before you indulge in colossal reel slots, ensure that you have gained the necessary experience by playing free reels. And once you have gained experience, be cautious with how you stake. Ensure you set aside a reasonable budget to avoid infringing on your finances.

Even with experience, you must exercise caution when playing online slots with reels. With the transformation achieved by colossal reel feature, gaming enthusiasts have a reason to smile as they can now enjoy an array of options that provide an opportunity to earn handsomely and at the same time enjoy fun moments. On that note, if you were looking for new casino games to indulge in, be sure to try out online colossal reel slots. You certainly won’t regret the experience!

Where to Play Online Slots with Colossal Reels

Which are the best Colossal Reels slot machine?

Here at NewCasinos.org, we have to confess that we hate playing Monopoly. When it all boils down to it, the game is just countless mathematics, and you can’t really win without upsetting your opponents. Fortunately, we do not hate playing the Epic Monopoly II Colossal Reels slot from WMS!

This game has a normal set up of five reels and four rows, plus the extra ‘colossal’ set of reels to the right of the main playing area of a dozen rows and five reels.

When you hit spin both sets of reels start tumbling. You will find all the usual Monopoly symbols on the reels, including Mr Monopoly himself. Some symbols come stacked up to four rows on the main reels, and up to six rows on the colossal reels.

The best thing about this game is that wilds can transfer across from the main reels onto the colossal reels, hence triggering some very tidy wins!

Spartacus himself is the most attractive symbol including upon the reels – and not just because of his muscular physique! He comes stacked up to eight rows high on the colossal reels and has the potential to trigger many a colossal win. Indeed, on the colossal reels, ALL symbols come stacked from between four and eight symbols high.

Just like Epic Monopoly II wilds in this game may transfer over onto the colossal reels, turning the reel upon which they landed completely wild!

Give yourself a colossal treat – play a Colossal Reels slot today!

There are plenty of Australian and Canadian online casinos where you can play WMS Colossal Reels slot machines. Why not read our online casino reviews and find one that’s just right for you?