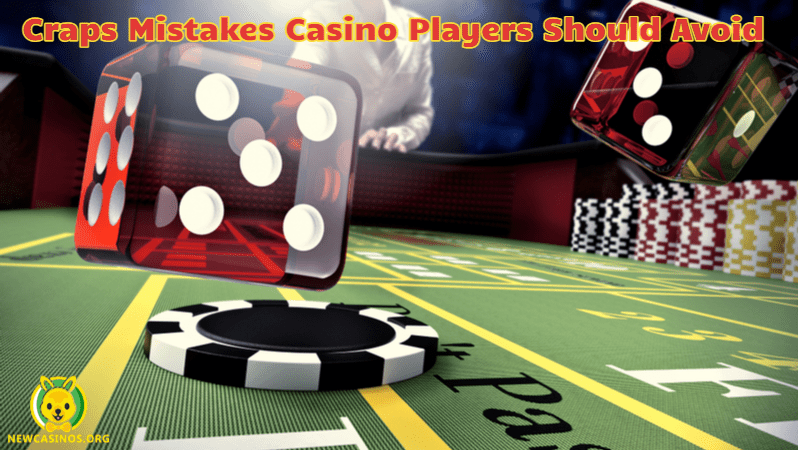 There are many mistakes that players make while playing craps online. With numerous betting options, gamblers can easily make a bad decision, especially if they start following what other players are doing. Fortunately, if you learn more about the worst craps mistakes, it’s very easy to avoid them. There are very few things you need to know to start playing craps mistake-free. Read on to learn how you can avoid the worst craps mistakes. The good news is that craps is simpler than it seems at first.

1. Failure To Understand The Rules

You should avoid playing craps without a proper understanding of the game. To play real money craps requires a player to fully understand the rules of the game. Online craps is a very complex game that can easily leave you bewildered. Moreover, the language of craps can be foreign, until you understand the rules of the game you want to play. Keep in mind that this advice is not meant to scare new players. Newbies can start playing at online craps casinos for real money and manage to win. The best thing you can do is making sure you play within your means and experience. Most craps players wager on pass the line bet. This is the case especially when it comes to new players. Essentially, playing a pass the line bet allow a player to closely watch and enjoy playing the game at the same time. Understanding the game and gaining experience are some of the things you should prioritize while playing craps. While craps for real money can be pretty lucrative, players should understand that luck plays a major role.

The craps game starts with the come-out roll. In most cases the “come out roll” is resolved on the 1st roll, but at times it remains unsolved over different rolls. After the come-out roll or the array of rolls is resolved, the new come-out roll begins the new series. After you’ve prepared to place a bet on the come-out roll, a player can then wager on the don’t pass or pass line. It somehow depends on the players at the table, but many craps players choose to wager on the pass line. While it’s not clear why this is considered as the best way to wager by many craps players, if you choose to place the don’t pass bet rather than the pass line wager at the craps table some players might think you don’t know anything about the game. Nevertheless, the payout rate, casino house, and the long-term odds show that the do not pass is the best option. Essentially, the difference between the pass line and don’t pass line is quite small. However, even the smallest difference usually accumulates in the long term. One of the biggest mistakes you can ever make while playing craps is trying to play the same way as other players do.

As you already know, the odds wager offers a 100% return to player rate. However, you should place a don’t pass or pass wager before you start placing the odds, and each of the bets had a return that does not reach 100%. This means that the casino still has an advantage when you play real money craps. And every time the house has an edge, if you continue playing for extended periods of time, it’s highly likely that you will lose. There are a few things that you must do to help limit your losses in such situations. The best thing a player can do is follow the rules or just adopt a simpler formula.  For instance, you can start by placing the smallest bet size allowed and increase your bets depending on whether you are winning or losing. Players are allowed to make small bets when playing mobile craps online games as opposed to when playing in land-based casinos. So, you might consider switching to mobile casinos or trusted casinos online.

5. The Speed Of Mobile And Online Casino Craps

There are two advantages of playing online craps or at mobile casino apps. However, it also has a major challenge that might be the worst mistake you can ever make playing craps. The two advantages of online and mobile craps are the small wagers that players are allowed to make. Secondly, most casino sites offer lucrative bonuses to craps players, you can take advantage of the bonus offers to play real money craps and win real cash prizes. The worst mistake craps players make while playing online and in mobile casinos is that the game is very fast-paced. When playing craps in a land-based casino, the gameplay is moderate. This is because it takes a while for every player to place their bets and throw the dice. Moreover, the winning bets are paid out, and the losing bets are collected. Most craps players see this as a benefit since they want some more action. However, the more you play the craps fast the more you risk more money. When you play online and mobile craps, you should slow down so that you only risk less money.

6. No Craps Comps And/or Craps Bonus

Whether you play mobile or craps online or choose to play craps in a land-based casino, you must do everything possible to improve your winning chances or limit your losses. Failure to take advantage of the available bonuses and comp points is one of the worst craps mistakes you can ever make. One of the best things you can ever do while playing mobile or online craps is finding the best casino bonus. Not every online casino offers a bonus to craps players, but there are a few that do. The best craps bonus helps boost your bankroll. Live and land-based casinos that offer real money craps do not offer bonuses like mobile and craps online casinos. But many real life casinos offer comps when playing craps. All you must do is join the right comps club and show the club card when playing at the right craps table. Craps comps and bonuses are not going to make real money craps a winnable casino game. Nevertheless, they help players play longer and can reduce your long-term losses. Failure to take full advantage of craps comp, schemes, and craps bonus offers are craps mistakes that you should avoid at all cost.

Many craps gamblers do not understand what controlled gambling is all about. Essentially, in craps, controlled shooting is the theory that you can rely upon to further manipulate the results of dice rolls. A small number of craps players still believe that controlled craps shooting is effective and still think that can improve their chances of winning by using it. While this is true theoretically, the mistake is that players still believe controlled shooting works. I do not believe this really works and no person has ever been able to show real proof that it really does. However, there is no reason why you should not try it out. The only mistake is altering the size of your bets based on the notion that you can alter the final outcome of the rolls. Many controlled craps shooters use different wager sizes and different combinations of bets. Finally, the best thing you can ever do while playing craps is stick to the top gambling strategies. The odds and don’t pass are the main craps wagers you ought to make. Any other wager is a craps mistake and makes the advantage the casino has bigger.