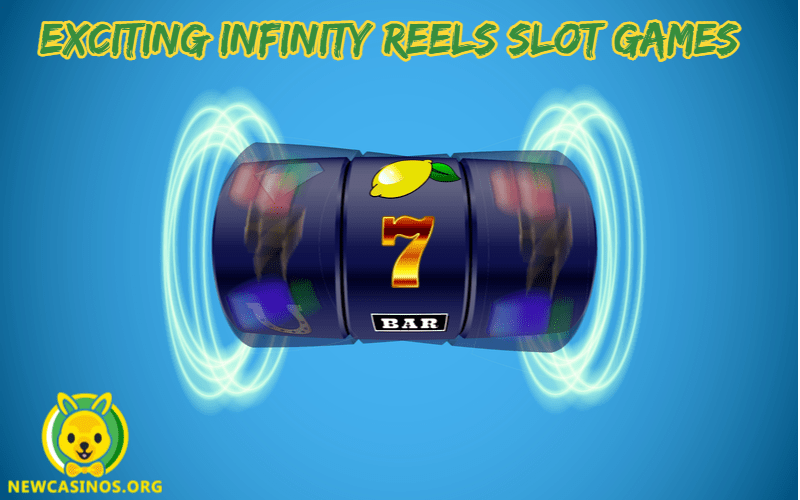 What Are Infinity Reels?

There are many cool features in these titles, with high paying symbols, progressive multipliers, free spins, and unique jackpot prizes that vary between games. Many of their bonus games offer multipliers that increase by 4 for each reel added!

The RTP (Return-to-Player) rate on Infinity Reel slot games is significant, with most above 96%. These games offer some fantastic winning potential for lucky players. The jackpot in an Infinity Reels game can be won by successfully maxing out the reels added to the screen. This varies from 12-15. When this is achieved, the jackpot prize will be paid out, which starts at 888x the bet.

These types of online slots games will appeal to those who enjoy the visual aspects. Each game offers spectacular graphics, smooth reel action, and an unforgettable gaming experience that captivates gamers around the world.

Many of their titles also use the licensed Megaways system from Big Time Gaming, which offers up to 117,649 ways to win. The team always aims to make each game a unique masterpiece by integrating the best features found in online slots.

Who Created These Types Of Online Slots Games?

Reel Play is an Australian based casino game provider. The team has a small but revolutionary lineup of outstanding slots games. Fans of games that step it up and move away from the traditional classic slots reel layout will love the titles created by ReelPlay. Their collection of casino games is well known to slot players for the cool and awesome ways to win money.

The company first started in 2014 under the name Chance Interactive but was re-established under the new brand name in 2019. They’re based in Sydney, New South Wales, Australia. The UKGC licenses them to provide online casino games.

Some key employees include the CEO Dave Johnson, and the COO Mark Crocker, who lead a small dedicated team of 15+ employees. Over time, the brand has forged partnerships and licensed the use of the Infinity Reels system & games to many other game studios, the most popular being Relax and Yggdrasil.

They have also achieved fame in the B2B sector after establishing many other partnerships during their history. Some include NYX, Scientific Games, OGS, Playzido, SoftGamings, NetEnt, Pragmatic Play, and Reel Kingsom.

This has made the Infinity-Reels slot game series extremely popular worldwide. In 2021, you can find 100’s of Reel Play casinos with Infinity-Reel games. Some popular online casinos that stock these slot games include 7Bit, Joo Casino, Kosmonaut, iLucki, Slotum, Wildblaster, Katsubet, National Casino, and King Billy.

What Are The Best Infinity Reels Slot Games To Play?

When you’re on the hunt for a new slots game, we recommend checking out the following titles from the InfinityReel series. These games can be played at many of our top online casinos.

You can find them by searching their title, or by filtering game providers to show Reel Play, Relax Gaming, or Yggdrasil, which are the most popular partner providers.

Because Infinity style games are new, you’ll be pleased to know that all games are developed on HTML5 and work fantastic on mobiles, tablets, and PCs.

Thor Infinity Reels is a game Reel Play introduced in March 2021. It follows the popular Norse God theme with powerful characters, wilds, re-spins, and massive multipliers. The game layout is 3×4, with new reels added to the right.

For each combo, the win multiplier increased by 1, creating some cool chances to net big wins in the base game. The game’s RTP is high at 96.2%, but it’s known to have a high variance level. Lucky players who manage to land all 12 reels can win the 888x Infinity bonus for a big payday.

While those chasing bigger wins will enjoy the free spins feature on Thor, with 6 scatters awarding the Jackpot feature. Get lucky with prizes of 10x, 50x, 250x, and 2000x in this fun Re-Spin style bonus.

Thor Infinity Reels can be played at many top casinos, and often the option to bonus buy is included. This lets you explore the bonus games straight away for a 100x buy-in cost.

Giza Infinity Reel was one of the series earlier releases and hit online casino lobbies in April 2020. Fans of Ancient Egypt slots will love this one, with the famous Egyptian characters blessing the reels.

The Giza slot game has a significant RTP of 96.454% and a variance level ranging from medium to high. This makes it an excellent game to start if you’re new to these styles of slots.

With a 3×4 starting layout, the additional reels create an awesome spectacle as you sit back and watch the entertainment and wins increase. Many players appreciate the insane 10,000x max win that can be won on Giza. The 10 free spins can be won by landing Pyramid wins or buying the feature.

During the free spins round, the progressive multiplier increases by 1-5 for every new reel added. This helps generate incredible win streaks with enormous payouts.

The RTP is set at 96.18%, and the game is known for its high variance level. The maximum you can win on Odin Infinity Reels is 20,000x. The game starts with a 3×3 layout but can expand to 5×12 during the feature. In the base game, each reel added will increase the win multiplier by 1.

You need to land 5 x Odin symbols to win the bonus feature. The free spins mode rewards players with 8-12 extra games, and the added bonus of a progressive multiplier increasing by 1-4x.

The Tiki slots game is a hybrid, mixing Megaways and Infinity technology to introduce a truly special game. The bright colours and vivid characters are set in a Tahitian tropical paradise, with many ways to win cash. It has a 3×3 layout and a high RTP of 96.07%.

The max win of Tiki InfinityReels is 10,000x the bet, offering incredible value to slots players. The Megaways offer an unimaginable amount of ways to win, with each spin unique. The Infinity Jackpot can be won by landing 12 additional reels and rewards 888x the stake.

Land 5 x Volcano scatter symbol to win the 10 free spins bonus. During this round, an extra spin is awarded for every 2 reels added. This can lead to a lengthy & profitable feature for lucky players, with Volcano re-triggers offering 4 extra games on top.

El Dorado is the original game that started the Infinity trend. Reel Play released it in December 2019 and has become a favourite at many online casinos. It features an Ancient Aztec/Mayan theme with Pyramids, Gods, Gems, and Tribal Chief Wilds.

El Dorado has a high 96.54% RTP and medium variance level, and a unique 3×4 – 7×4 layout. The base game is super exciting, with additional reels increasing the win multiplier by 1, and offering awesome potential as you chase the bonus. If you land 12 reels in a row, you win the juicy 888x jackpot bonus prize.

By landing 5 x Pyramids, you enter the bonus game, with 4 different free spins that vary in-game numbers & starting multiplier values. All wins that add reels will add 1-4+ to the multiplier value. This style of feature provides incredible value and the chance to win over 6,250x.

Reel Play released the Hypernova Infinity Reels slot game in September 2021, and it provides gamers with an out of this world adventure. Set in a galaxy far away, Hypernova features a 3×4 reel-set, 96.2% RTP, and 4 jackpot prizes reaching up to 2000x.

When you get a 5 symbol winning combo, the reels start adding to the set. For each additional reel, the round multiplier increases by 1. Get all 12 reels to win the Infinity Bonus worth 888x the bet.

The game also features a unique Re-Spins bonus, with players given the chance to land symbols on a grid. Fill in all the spots to win the max prize of 2000x the stake.