The Top 3 Most Famous Gamblers in History 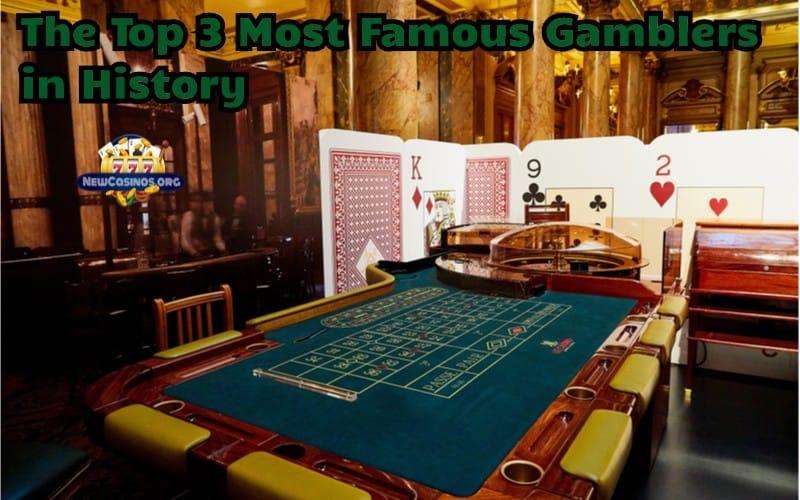 Here is a quick rundown of the 3 most famous gamblers names in history.

There are very few players in history who have been so lucky as to have a specific hand of cards named after them. Sadly, for Wild Bill Hickock, all he had to do to achieve this was to be shot dead.

Wild Bill’s real name was James Butler Hickock. He was born in Illinois in 1837, and once he had reached his twenties, he became something of a Wild West hero. He was a wagon master, soldier, spy, lawman, gunfighter, showman, actor and, of course, a gambler. Hickock even managed to survive a mauling by a bear when only 22.

He became the sheriff of Hays City in Kansas in 1869 and was later marshal of Abilene. In 1876 Hickock was playing poker at Nuttal & Mann’s Saloon in Deadwood, Dakota. He upset a fellow gambler named Jack McCall by telling him he should quit as he was losing heavily and was drunk.

The following evening McCall returned to the Saloon armed, found Hickock playing poker and shot him in the back of the head. McCann was executed seven months later.

The hand that Hickock held when he was shot was two pairs, aces and eights. This poker hand is known as ‘the dead man’s hand’. The fifth card can be anything, although in Hickock’s case it’s thought to be either the Queen of Hearts or the Queen of Clubs.

King Henry VIII is one of the most important monarchs in British history. Most famously of all, King Henry was married no less than six times. His first wife was Catherine of Aragon, with whom he was married for 23 years. Seeking a divorce, Henry was annoyed that the Pope himself would not allow it, so Henry set up the Church of England and announced the marriage annulled.

His future wives were Anne Boleyn (executed, framed for not bearing Henry, a son), Jane Seymour (died due to childbirth complications), Anne of Cleves (marriage annulled), Catherine Howard (executed, framed for adultery) and Catherine Parr (survived after Henry’s death). Henry had ascended to the English throne in 1509 at the age of 17, and reigned for just under 38 years until his death in 1547).

As well as a womaniser Henry VII was a notorious gambler. Playing cards was not common in the UK in the 1500s, so Henry had to settle with dice games, an early version of backgammon named ‘Tables’ and ‘Betting Queek’ which was a game not unlike checkers (or draughts as it is known in the UK). Eventually, cards did become popular, and Henry loved the game of ‘brag’ which is still played today and is not dissimilar to poker.

Henry was a poor gambler, though. Over two years he lost well over £3,000 gambling, which is the equivalent of £825,000 today. On one occasion, King Henry wagered the famous Jesus bells of St Paul’s church on the role of a single dice. He lost … but Henry framed the winner of the bet – Sir Miles Partridge – for treason and had him hung on Tower Hill.

There’s nothing worst in gambling than a sore loser!

As far as modern gambling legends go, there perhaps is no one more legendary than Archie Karas. He was the poker and pool player who came from nowhere to make $40 million only to lose it all.

Karas (real name Anargyros Nicholas Karabourniotis) was born in Greece but ran away from home at 15 and found a job on a ship as a waiter. The ship landed at Los Angeles, and Karas decided to get off and not get back on. He worked in a restaurant and soon began hustling players at the pool. When people got wise to his skills and refused to play him, he turned to poker instead.

The Greek began with a $50 bankroll in 1992, and three years he won game after game, tournament after tournament. By the end of 1995, Karas had turned that $50 in a staggering poker fortune of $40 million.

Not a believer in the adage ‘quit while you are ahead’ Kara continued to play poker throughout 1995 and … lost the lot.

Karas had a matter-of-fact attitude to money, saying: ‘You’ve got to understand something. Money means nothing to me. I don’t value it. I’ve had all the material things I could ever want. Everything. The things I want, money can’t buy health, freedom, love, happiness. I don’t care about money, so I have no fear. I don’t care if I lose it.”

Karas also didn’t trust banks. He held his money as hard cash and kept it in his car. He carried a gun and hired his brother as his protector. He kept playing pool and cards and at one stage had his bankroll back up to $4 million only to lose it the next day.

In 2013 Karas was arrested after being found to be marking cards while playing blackjack in San Diego. He was found guilty and sentenced to three years’ probation.

You may feel like becoming a gambling name, but you’ll notice with these three names they all suffered a fair amount of tragedy. It’s probably better that you gamble sensibly at the casino sites recommended by NewCasinos.org.