It’s hard to imagine it now, but Aces & Faces video poker was a crave which swept across the United States in the late 1970s and early 1980s. We say ‘across the United States’ but we actually mean ‘throughout Las Vegas’. It was the very first video casino game and was so popular that playing video poker saw people abandon the casino tables in favour of this fast-paced gambling game.

Video poker was created by the legendary Si Cobb, creator of Bally, Sircoma and IGT. The game itself is based on draw poker, but instead of playing against opposition players, you attempt to get the best poker hand. You are dealt five cards and then you have only one chance to draw new ones. You may draw as many cards as you want – from zero to all five, and fresh cards come into replacing them. With your final hand, you consult the scoring table to see if you have a winning hand.

With this version of video poker, you need to land a hand with a minimum of a pair of jacks. You also receive bonuses if you land a hand containing four jacks, queen, kings or aces, hence ‘Aces & Faces’. 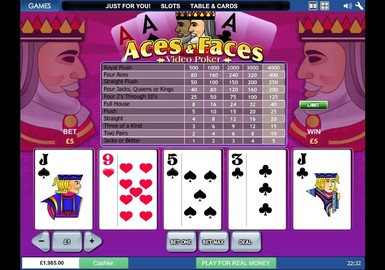 You can choose your coin size with the selector in the bottom right-hand corner of the screen. This can be as small as 0.05, or a large as 5.00. To choose how many coins you wish to bet with, click the ‘BET ONE’ button. If you want to bet the maximum of five coins, then hit the ‘BET MAX’ button. Once you are happy with everything, hit the ‘DEAL’ button.

You will be dealt five cards. If any of those cards complete a winning hand (anything that’s a pair of jacks or better) then they will be held automatically. You will still be able to draw in the hope of improving your hand. If you don’t want to hold the cards that have been held automatically for you, then click the ‘HELD’ button to uphold them.

You hand is now complete. If you have a winning hand then the game will pay you out automatically.

Wins can be doubled if you fancy a gamble of a different nature. You will be presented with one card face up, and four cards face down. You can, at any stage, choose to collect your winnings, double or double half of what you have won so far. You need to choose one of the four face-down cards. If the card you choose turns out to be higher than the face-up card, then you win! If it’s of equal value then you neither win nor lose. If it’s lower, then your winnings are lost and the doubling-up game is over. You can double up as many times as you want until you lose, or the double-up limit is reached.

Once you have been paid, a new round begins.

To be fair, video poker games have never been associated with superb graphics and amazing sounds, and that’s because they don’t need to be. If you play this game you will be treated to an authentic video poker experience! The cards are nice and clear and the game plays at a suitable speed, which is all even the pickiest video poker players will care about!

An authentic rendering of one of the most popular video poker versions available anywhere by Playtech. It does what it says it does, and has a high RTP – what more do you need?