Review of Age of the Gods Slot by Playtech

There are several different instalments of the NetEnt’s Age of the Gods slot. In this review, we are going to take a closer look at the original one. This is a 5-reel slot comprising 3 rows and 20 fixed paylines. It comes with quite interesting gameplay and rich graphics that include gold-rimmed reels, golden gods palaces in the background, water columns leading into a large lake, and plenty of other exciting visuals. The slot storyline is based on Greek Mythology, with Greek gods Poseidon, Hercules, Athena, and Zeus being the major characters (and symbols).

Once you delve into the slot machine, you will find interesting things such as: 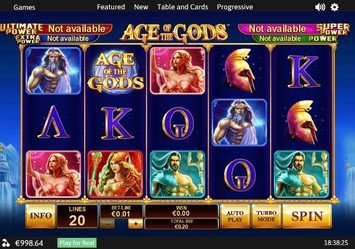 Playtech has always been a graphics-intensive developer, which is evident in most of its slots like Desert Treasure. And Age of the Gods slot by Playtech follows suit with high-quality design features and themes. The software provider has made sure that all aspects of the slots deliver on visuals and production quality. This includes a highly detailed background, captivating sound effects, as well as well-design 3D symbols.

In the background of the 5 reels and 20 paylines, ancient Rome has been reconstructed to with detailed blocks of symbols. Perhaps of more significance is the superb attention to detail when it comes to architecture. In the far backdrop is blue skies capturing a surreal sunset. This provides the spinner with a visually stunning background that surrounds the centre-placed reels. From the bottom to top, the reels are set to offer players winnings, including progressive buttons for adjusting the gameplay.

When it comes to game symbols, several Greek gods, including Athena, Ares, Poseidon, Zeus, Hercules (he’s also a god here) are the major symbols. Athena is the highest paying “god” symbol which will pay 1000x your stake if 5 appear on the payline. Achilles helmet also appear in the reels, as well as low-value card symbols A, Q, and K styled in the roman lattice. There are also two other higher value symbols that make occasional appearance earning the player big wins. There’s the Age of the Gods block that is the scatter symbol, while a big golden “Wild” with laurel wreath is the wild symbol. When you land the wild symbol, it substitutes for all other symbols with the exceptions of the Age of the Gods scatters. If 5 of the wilds lands on the payline, you can expect to be paid 10000x your stake.

On the overall, the production, thematic, and design quality of the slot is marvellous. Playtech used pseudo-3D effects to spruce up the game symbols, offering a theme that’s refreshingly exciting. The quality of the sound effects and graphics shows that Playtech went above and beyond to make the game fun, exciting, and rewarding.

Age of the Gods slot by Playtech is teeming with special features that are specially designed to keep the player rewarded, cheerful, and engaged throughout the play. I love the way Playtech took features that are commonplace in online slots but went the extra distance to bring in a plethora of other exciting elements.

Age of the Gods slot by Playtech is all about landing the Pantheon of Power on the Reels feature. This happens when all the five Greek gods emerge consecutively on the active payline. They should appear starting from the first reel toward the second, third, and so forth. If you land this feature, you can expect to walk away with a payout of 200x your line of the stake.

You can trigger the free spins feature when you land 3 or more of the scatter symbols anywhere in view. The free spins come in an option of four:

The gameplay is what comes standard in most 5-reel video slots. You are permitted to increase or decrease the # of paylines before you set your bet value. When all paylines are working, you can wager from as little as £0.25 to as high as $250 per spin. You can toggle the Turbo Mode and set it on auto for up to 100 spins.

The progressive jackpot can be triggered randomly as you spin. However, the higher your bet amount, the more likely that the jackpot feature will be activated. When it’s triggered, you will be shipped to a screen displaying a 5×4 grid. All you have to do is click on your choice of coins on the grid until you find 3 matching. As you can see, a win on the feature is guaranteed, and there four kinds of jackpots: Power, Extra Power, Super Power, and Ultimate Power Jackpot.

The gameplay for Age of the Gods is surprisingly different from other slots on the Age of Gods instalment like the Furious Four. That’s why it pays to check it out, especially when it comes to its added bonus features, excellent theme, and progressive jackpots, and a high RTP of 95.2%.