Aloha Cluster Pays is a slot machine that was released by NetEnt in 2016, and which has become one of the most popular such games at online casinos, in the years that followed. Part of the reason for that was the fact that it was often used as part of bonus offers and pushed heavily, and another reason was that it introduced fun new mechanics, which have become a lot more popular over the years. It gave us the Cluster Pays for the first time in a game from NetEnt, and it featured a Tiki-inspired design with high-end graphics. It was not only unique, but also fun to play, and the low volatility helped it with that. The game has 6×5 reels and a Cluster Pays system which requires that you have at least 9 symbols in a group, to get you paid.

There are a couple of very interesting features as well in this game, and the list includes: 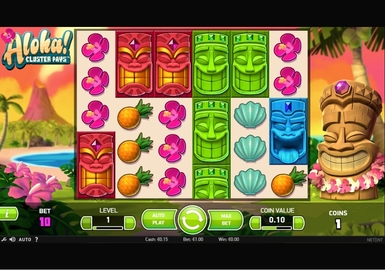 It’s a Hawaii themed slot machine, that’s obvious from both its name and the symbols that we find on its reels. With cartoon-like graphics of the highest quality, and with a setup that doesn’t include any of the usual filler symbols, I found it a very enjoyable experience.

Its list of symbols starts you off with the wild symbol and the scatter, and then you get three stacked Tiki Totems coloured in red, green and blue, along with four low-value symbols, which include the pineapple, a coconut, a shell and a flower.

Aloha Cluster Pays was an innovative slot machine when it launched, at least for NetEnt, as it brought the Cluster Pays system for the first time to one of their releases. They’ve launched a lot more games that use this system since then. In this particular case, we’re looking at a game area with 30 symbols (6×5 reels), where you are trying to get a group of at least 9 matching symbols to be next to each other. The cluster forms if the symbols in it connect vertically or horizontally. The more matching symbols (and wilds) that are in that cluster, the better the payout. The type of symbol involved matters as well, in deciding how much the game offers.

It should be noted that the high-value Tiki icons will make appearances double-stacked, making them a bit more likely to create clusters, than they would normally be.

Wild Symbols: It’s called a Substitution Symbol by the game’s paytable, but that’s the same thing as a wild in any other game. Its role is to act as a substitute, but not in the usual manner. It will not contribute equally to all types of clusters formed next to it. Instead, this symbol is going to be transformed into a single other icons, the one that has the best payout to offer as a result. As such, you can only have this substitution symbol as part of a single cluster.

Wild symbols are not able to replace scatters, so features may not trigger with their help.

Sticky Win Re-Spins: A big feature of Aloha Cluster Pays will come in the form of the Sticky Win Re-Spins, though this is something that triggers randomly, it’s not guaranteed. It always comes as a result of a cluster forming, so after a win.

The feature starts up by turning the winning symbols into sticky positions, after which it will re-spin all other positions on the screen. The target is to have additional symbols added to the winning cluster, in order to boost its size and improve the payout for that round. If that happens, then the new symbols become sticky as well, and the re-spins will continue for the rest of the positions.

This continues until you either fill up all positions with the symbols from the triggering winning cluster or until you stop getting new symbols of that type.

Free Spins with Symbol Drops: It’s another side of the game’s features that is worth mentioning, and which can have a major impact on how profitable this slot machine will be for you.

The scatter symbols take the form of Free Spins stamps, which are double-stacked, and which can appear on all 6 reels. In order to reach the free spins stage, you are required to land this symbol on at least three reels, and on as many as six. It’s enough to get it even partially visible on each reel, which is a plus since its double-stacked nature makes it a bit more likely to be useful.

Symbol Drops is the name of the main feature that’s been implemented in the free spins. Once again, we’re looking at a fun mechanic and a fairly rare one at the time. As you’re forming clusters of low-value symbols, the ones involved will be removed from the game area. In time, as you keep forming low-value clusters, you can eventually reach a stage where all symbols of that type are removed, and you’re playing only with the three Tiki symbols of high value. At this point, you have the best odds of triggering the slot’s best payouts.

A lot of NetEnt slots released in the past, shared the betting system that’s in place for Aloha Cluster Pays as well. It relies on a number of fixed lines, 10 in this case, and it allows the player to pick both the number of coins (up to 10, by picking the Level) and their denomination (up to $2). A complete betting range starts from $0.10 and can end up at a maximum of $200.

For a game where the volatility is low/medium, having a jackpot of up to 2,000x the stake to go after is not a bad deal. The game is fun as you play it, and it gives you a juicy target to aim for, all while it is expected to have a lifetime RTP of 96.42%, which is also good.

Verdict: If you’re looking for a game with solid features, payouts and mechanics, there aren’t a lot of slot machines that are better than Aloha Cluster Pays. Though already a couple of years old, the game still remains a player favourite, and there are many that keep coming back to it. I like that the rewards are good, the gameplay exciting, and it’s not terribly volatile either, so there is not a lot of risks involved for shorter gaming sessions. You can try and go after one of its big wins, or you can simply relax with it, it’s that type of game.

It might not seem as unique and interesting as it was when it initially released, but it’s still a solid game, and I’d recommend it happily.