With an Eastern-inspired design, which relies on the beauty of China’s regions and bamboo forests, Bamboo Rush is not that unusual of a slot machine if we look mostly at its story and at the symbols that it adds to the reels. You get quite a few games with Panda bears for main characters and bamboo forests as a location that the action is placed in.

What makes Betsoft Gaming release memorable, is the fact that it’s one of the games with the highest potential around today, and despite this, it also has a very good RTP, so the odds are just a little bit better that you actually get one of those excellent rewards. Don’t forget though, this slot is highly volatile and designed with veteran players in mind, at least when it comes to the risk involved. It’s a game which has 5 reels with 40 active lines.

The better payouts available here will be coming with help from the game’s features, and those include: 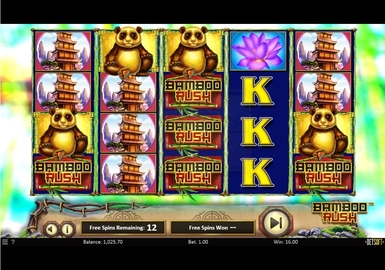 The Chinese/Eastern theme is one that appears to be quite popular, and I assume that the reason for it is that the Asian market demands it and reacts positively to it. Bamboo Rush appears to be built with that market in mind, using a mix of symbols on its reels that will feel typical for such games.

As symbols, the game has the Wild Bamboo Forest, Golden Panda scatters, Giant Pandas, Yin Yang logos, Temples, Lotus Flowers, the game logo, coins, and then it moves on to the standard Royals, ranging from 10 to A.

Don’t go in expecting some new feature, Bamboo Rush is not that type of game. As you will find out below, it relies on tried and tested options, the kind that you will find everywhere else. And yet, they manage do put together a game with awesome potential as a result.

You will also discover that all symbols land stacked on the reels. There are both pros and cons to this. Forming individual winning combinations is a bit harder typically since there is a variety of symbols on each reel when they land stacked.

On the other hand, if you do get the right symbols in place on enough reels, you have a better chance at forming multiple combinations at the same time. It’s one more element that will add to the volatility of this slot machine.

To give you an idea of just how volatile the experience can get, the base game has a hit frequency of just 11.80%, so about 1 in 8 spins ends up bringing you a win. This slot gives the idea of a dry spell a whole new meaning, and a lot of other games will have the rate at 20% or higher. Luckily, the free spins have a better hit frequency, of 25.45%, so 1 in 4 rounds ends up a winner there, on average.

Wild Symbols: Used as substitutes, the wild symbols might appear somewhat limited at first, especially as they’re used only on the reels 2, 3 or 4. They’re not capable of replacing Golden Pandas (scatters), but when placed next to the right regular symbols, a combination can be formed. As you’re about to discover below, these wilds gain additional abilities during free spins, applying multipliers which have a big role in the player’s attempt to get the most out of this slot.

Free Spins with Wild Multipliers: You’re going to need a scatter symbol landing on 3, 4 or 5 reels, once in each case, to trigger the free spins. The number of triggering symbols determines the reward, so you can get both a cash prize between 8x and 100x the stake and 8, 12 or 20 free spins. Once the feature gets going, it can be retriggered, by using the same Golden Panda scatters on 3 or more reels. The odds that the free spins will trigger in the first place are about 1 in 135 (0.74% chance).

Probably the best thing about the free spins, besides the fact that they’re free, is that their wild symbols gain additional abilities. 2X or 3x multipliers are applied by each of the three wilds that you can get on just as many reels, for each combo. Multiplying the values coming from these wilds, you find out that up to 27x combined multipliers are a possibility.

As the hit frequency rate more than doubles during free spins, it seems that the game will change more than just the wild’s multiplier, but I can’t complain. It’s at this stage that you can get a chance at that top jackpot.

Setting up the wager will require that you select the value which will go towards the game area, covering all available paylines. Look at the bottom, there is a line-up of bet options to select from. A minimum bet is worth just $0.10, while the maximum one is going to reach $20. All 40 lines of the game are active, regardless of the exact bet that you select here.

Bamboo Rush is special not because of its RTP, layout or even the wild multipliers that are available at times. It’s the top jackpot of up to 53,208x the stake that will impress most players, as even these days it’s very rare to see a game capable of paying that much, and actually being offered without a lower cap in place.

You will also discover a game with above-average risk though, the developer mentioning that it has Medium-High volatility. This means that there are fairly high odds that you’re going to have long dry spells or that you will lose a lot of money, and that getting a big payout here is going to be tough.

Leaving the risk aside, we see that the game has an excellent RTP though, of 96.90%.

Verdict: Bamboo Rush has a couple of things going for it, and I would especially mention its top jackpot here, along with some of its features and the big multipliers which can make things exciting.

It’s designed to be played by veterans, because they’re the ones more willing to bet in a slot machine with high volatility, and yet it doesn’t give them anything too unique or exciting. Add the hit frequency of the base game, which is at a measly 11.80%, and plenty of people will avoid it, in favour of slots that make the paid spins just a bit more interesting. Reaching the free spins should make it all worth it for some of those players that hang on, but most of them will not get there.

Overall though, if you’re interested in games with excellent top jackpots, and you’re willing to brave the game’s high volatility and extremely low hit rate from the base game, Bamboo Rush has the potential to be a memorable experience.