While we’ve seen a number of other voodoo themed slots out there, generally you can count on Yggdrasil offering better graphics than their competitors. We’re seeing the same thing in Baron Samedi slot, a game which offers exquisite graphics and a good mix of cool features. The Swedish developer did well here, working on delivering a creepy atmosphere which does its job, and helps sell the story to us. In the end, it’s still a game with 5×3 reels and 25 active lines, but there are also elements introduced to spice it up.

Give Baron Samedi slot game a chance, and in addition to that story, there will also be cool features for you to explore: 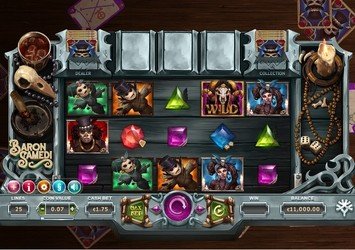 For starters, let’s check out the theme of Baron Samedi slot. Inspired by Voodoo magic and using the religion’s creepy priests as main characters, the focus will be on the one called Baron Samedi. The reels are placed on a table, with various implements and skulls lying around in their vicinity. From the lit candle whose flame is burning quite convincingly, to the smoking cigar from the ashtray, the background graphics and animations really help sell the atmosphere of the slot.

Getting to the symbols which show up along the way, you will get Baron Samedi as the main symbol, which will pay up to 120x (4.8x total stake) for five symbols. The next symbols give us Brijit (Voodoo priestess), the two Voodoo dolls which represent the main characters, along with four gemstones. As feature symbols, they rely on images of a totem with a ram’s skull, along with a potion bottle and the Free Spins logo.

Baron Samedi slot is not the type of game to keep things simple, on the contrary. While you still get access to regular wilds or free spins, as well as second chances in the form of re-spins, it also incorporates a Card Collection mechanic which could help spice up your game-play during free spins.

It’s the one showing you the Totem with the ram skull, luckily marked with the Wild logo as well. You’re able to use this one as a replacement, being combined with any regular symbol when the conditions are met.

Get two of the Free Spin icons to appear, and a re-spin feature will trigger, in an attempt to get you the third symbol and the free spins which you’ve just missed.

This is part of the free spins, and it involves the collection of cards which you get each round. Get multiple cards of the same type, to complete a collection and to receive 3 additional free spins. The card in question also becomes active for your game.

The cards can bring you a variety of features. They include super stacked symbols, mystery symbols, mystery reels, and extra wilds, wild reels, up to 10x multipliers, guaranteed wins and symbol upgrades.

The absolute highest potential reward, for a single round of Baron Samedi, is going to return 1,200x total stake to you, or $150,000. It’s going to require a screen filled with Baron Samedi icons, during free spins where 10x multipliers are used. The game has a good RTP, of 97%, definitely one of its major strengths.

Verdict: Baron Samedi slot is one of the exciting games that Yggdrasil offers in their collection, a slot machine which has excellent graphics, good-sized top payouts, a very long list of potential features and modifiers, as well as a 97% RTP which looks rather impressive.