Review of Batman vs Superman: Dawn of Justice by Playtech

It’s part of a large collection of branded slot machines that Playtech has released over the years, and it is based on a film that aired in 2016. Batman vs Superman: Dawn of Justice is going to take the action into the DC Comics universe, showing us the same battle between the two superheroes, as the film that it is based on. With excellent graphics, big top payouts, unique features, I think you will appreciate the game for what it gives you, though there will be certain areas where room for improvement was left.

If you’re interested in the major features that were introduced, and which add quite a bit to the appeal of this game, expect to find inside: 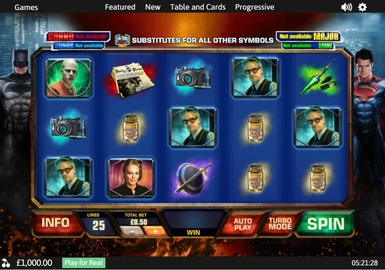 This is a branded release, meaning that its theme is based on a film in this particular case. With the same name, the film launched in 2016, and it was the first one to have these two superheroes together. It’s a darker movie than some might’ve liked, but it was turned by Playtech into a cool slot machine, with high-end graphics that will borrow from the source quite a bit. You see all the usual superheroes and villains in the game’s symbols, oftentimes as wilds. Next to them, there is kryptonite, the Batmobile, swords with shields, cameras, newspapers and Granny’s Peach Tea.

I like the variety in features, and Batman vs Superman: Dawn of Justice ends up doing a very good job at keeping things fresh. You don’t get bored as easily with a game when there are a lot of different smaller features that you can trigger. As you can see below, some of the features only become available during the free spins, but that’s the way slots are usually designed.

Wild Symbols: There are several versions for the wild symbols, and while some are designed to be used in the base game, others are only made available once the free spins come around. The base game gets a regular wild, along with character wilds based on Superman, Batman or Doomsday. Wonder Woman is an extra wild, that you get only during certain features.

Either way, what you end up getting here, is a substitute that works in the usual manner, by landing in the right spot and forming combinations when there are regular symbols in the required positions on the same line. It’s not always going to be useful, but more often than not, it will find some way to contribute.

One more big advantage of the wild symbol is that when you get it landing up to five times on the same line, and aligned in the right way, it will pay its own rewards. Up to 50x the stake is offered for every active line where this happens.

Shifting Wilds: Two of the wilds mentioned above, based on Batman and Superman, will have additional abilities to apply when landing in the base game. These are considered Shifting Wilds, which will move in a certain direction until they end up leaving the game area. While Superman moves towards the leftmost reel, Batman will go towards the rightmost one.

Batman vs Superman: One of the two versions for the free spins, called Batman v Superman, will involve the two wild symbols and the Shifting Wilds mechanic mentioned above. If the two superhero wilds are on the same row, and they meet up as they move in opposite directions, then they will do battle. One of them loses and then goes away, leaving in its path wild symbols. You get to pick the hero that represents you, and if you’re the winner, then you get 4 more rounds in the free spins feature.

Dawn of Justice: The other big feature that’s been added, is the version of the free spins that triggers when the stacked Doomsday wild appears on reel 3, and covers it completely. At that point, it is transformed into a reel-sized shifting wild, which moves towards the left by one position per spin. It transforms into a smaller stacked wild when it gets to the 1st reel, only 2 symbols high, and then the free spins are over.

The way to add more free spins to this feature is to have one of the other superheroes acting as wilds (Batman, Superman and the extra one, Wonder Woman), landing on the left side of Doomsday. This pushes the Doomsday reel to the right and adds more free spins to the total.

Playtech is not shy about letting high rollers try out its games, and they offer a fairly generous betting range in Batman vs Superman: Dawn of Justice. The starting point is at a minimum of $0.25, which would allow each of the 25 lines to receive a $0.01 bet. Bets are increased as needed, and a high roller appears to have the option to wager up to $2,500 per spin, or $100 per line.

It’s a slot machine that offers progressive jackpots, pretty much all do when they are part of the DC Comics universe, and there are actually four different ones that you can trigger. From larger to smaller, they are called Grand, Major, Minor and Mini Jackpot. These will trigger at random, through a special feature that will require that you make picks on a special screen.

Batman vs Superman: Dawn of Justice has its own rewards to give away, but they’re not that impressive if you look at their values. Up to 1,250x, the stake is offered when the reels get only wilds in all positions.

Another area where the game doesn’t shine, is RTP wise, with the figure quoted for it is 95.05%. Slots with progressive jackpots are typically doing worse in this area, but compared with some of the others, this one isn’t that bad.

Verdict: I found in Batman vs Superman: Dawn of Justice a game of very good quality, which many will enjoy, and for more than one reason. I will mention the graphics first, and the use of images that are based on the actors that played in the movie, just a bit more cartoon-like in this case. It’s one of the game’s strengths, just as the use of themed symbols is another since it extends even to the low-value icons.

Add the variety in features, the presence of four progressive jackpots, and even the slot’s more average-sized payouts, and those are all on the list of pros.

The one con that I would note, is the RTP of 95.05%, which is a bit below what you’d expect these days. It’s not unusual for a game with progressive jackpots though, or for a branded title which has higher costs of production.

All in all, it’s a game that I would recommend to most players, but especially to those that are fans of the movie, it will not disappoint.

Casinos Related to Batman vs Superman: Dawn of Justice