Review of Berryburst Slot by NetEnt

While most casinos are teeming with fruit-themed slot machines, Berryburst slot manages to have a refreshingly unique look and feel. From the captivating design, the NetEnt slot certainly follows in the footsteps of its amazingly popular predecessor, Starburst. A mouth-watering splash of the ice-cold summer drink forms the background of the slot. Together with upbeat music, this breathtaking image accompanies you in the backdrop as you spin the reels.

Yes, from the first impression you would think Berryburst is just a revamp of Starburst. But it’s more than that. It’s a low to medium variance, standard 5-reel video slot without paylines. Instead of paylines, it runs on the Cluster Pays game engine. That means you will win when a cluster of 5+ similar symbols connect vertically or horizontally. We expect a certain level of quality and creativity from NetEnt slots, and Berryburst doesn’t disappoint. A peek at its features reveals some exciting things like: 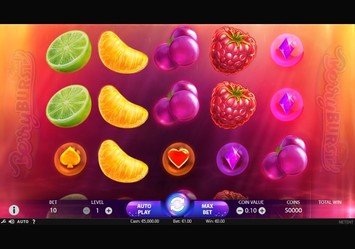 Overall, Berryburst slot has a fantastic fruity theme, fabulous graphics, and a cheerful soundtrack. It’s set in an ice-cold fruit drink, in all its colourful glory and dazzle. The colour blend is easy on the eyes and has a summer touch to it.

The gameplay is innovative. And despite looking like that of Starburst, it can cover the entire screen. This is what truly makes Berryburst slot stand out. While the game is playable fullscreen, it is surprisingly clear and easy to play.

The major symbols are summer fruits typical to slots of this kind. These include orange slices, limes, raspberries, and berries. They are designed with 3D to feel to it and brighten to stand out on the reels. As you can expect, the low-paying symbols are classic card deck spades, diamond, and hearts set in golden bubbles. These royals are styled to look fruit-like themselves.

An ice cube styled with letter W in neon is the wild symbol. When ice cubes land on the reels, they substitute for all other symbols. This increases the odds of a player winning, making an ice cube the mainstay feature in the slot. Unfortunately, the slot doesn’t include free spins feature nor bonus symbols. That, in turn, means that the game has no scatter symbols (scatters).

The design and production quality of Berryburst slot is superb. NetEnt came with the mindset and creativity of Starburst and took it up a notch. Yes, they offered a theme that has been used over and over again. But they managed to make it look fresh and exciting. The quality of graphics shows that NetEnt went all in with this one.

I absolutely love that Berryburst by NetEnt brings together features found in typical slots. But they went the extra mile to incorporate other exciting features. From the outset, it looks just like another 5-reel video slot. However, NetEnt steered away from payline structure. Instead, they infused the Cluster Pays game engine. That in and of itself makes Berryburst unique and refreshing, especially to players used to playing Starburst.

Just like its earlier cousin Starburst, Berryburst is a video slot that’s all about the wilds. These incidentally come in the form of ice cubes emblazoned with the neon letter W.

Most players would be disappointed that Berryburst doesn’t include free spins feature. But they will not miss it thanks to the ever-expanding wild respins feature. This is where the stuff gets really exciting, and basically the reason Berryburst is an action-packed slot.

The good thing about the wilds is that they can land on any of the 5 reels. When an ice cube (the wild) lands anywhere in view, it’ll expand to cover the entire reel. That means it can substitute for all the other symbols on the particular reel, improving your winning chances. More importantly, the wild symbol will trigger a respin, with the possibility of others landing on the reels.

If the lady luck falls in your favour, you can land wild symbols all over in all reels. That means you will walk away with a 10,000x payout. But because they are stacked wilds, the possibility of a win is not really guaranteed. However, the good news is that your wins on wilds and respins are paid instantly.

The betting system offered by Berryburst is unique. Considering that there are no paylines, it relies primarily on the Cluster Pays game engine. To win, you must land a cluster of at least 5 similar symbols connected either vertically or horizontally. When you land a wild, it will cover the entire reel triggering a respin. With respin feature, you have a possibility of landing a winning cluster or more wilds. In this slot, players can wager from as little as €.01 to €2.00 per spin.

Other gameplay highlights are:

As a low-to-medium variance video slot, we expect Berryburst to be as, if not more, rewarding and exciting as Starburst. The graphics are superb and comes with interesting features. The exciting part is the unique pay mechanics. This might not be best for hardcore gamblers with a standard RTP of 96.56%, and no scatters. It’s a great introductory slot for newbies, though.