Among the growing collection of Yggdrasil Gaming slots, you will find sports-themed titles like this one as well, Bicicleta being inspired by the Brazilian football at least in name since its title was taken from a trick that was invented in that country. Whether or not it’s a year with a big football championship when you’re reading this, I feel like the game has plenty to propose to make it exciting for someone that enjoys the sport.

For Bicicleta, they went with a standard setup of 5 reels & 25 lines, but with 4 symbols per column, which makes the lines a bit more spread out than you’d think at first. Moving on to major features, a quick look at what is offered gives us: 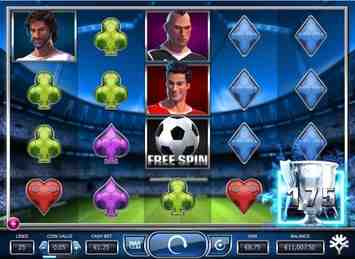 Bicicleta is a game that was released in June 2016, so right before the European Cup started. The name is inspired by a Brazilian football trick that players would do though. The mix of symbols shown on the reels includes a Brazilian player, but there are plenty that looks like they’re German, Danish and so on. The symbols that have been selected have those players, but also footballs and card suits with a football theme. 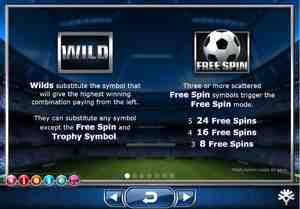 Bicicleta isn’t content with just offering an average mix of features, and it seems like it even innovates a bit.

You get “wild symbols” for one, and you may use them in new combinations. The wild needs to appear in the right spot so that it has other regular symbols that match next to it on the same line. When that happens, the wild behaves like the other symbols and forms a combo with them. The usual combo rules apply, so you need the mix of regular and wild symbols to be in an uninterrupted order, from left to right on that same pay line. Wilds may do this for all regular symbols, but they’re not replacements for Trophy or Free Spin symbols.

I found that the “Football Free Spin scatter” is the second feature symbol that’s been introduced in Bicicleta. The symbol may appear anywhere on the five reels and it helps you whenever at least three are visible. 8, 16 or 24 spins are given for free, to players that have 3, 4 or 5 Football symbols in view.

While you are in the free spins, the player symbols that appear to have a chance of being turned into “sticky wilds”. These new wilds are going to be locked in their present positions until the feature is over. 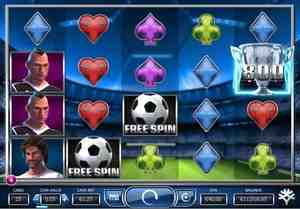 Third, we have a “Trophy symbol”, another scatter but one that you get on a single reel, the 5th one. Have it appear there during your base game spins, to receive 8 to 12 free spins or a prize of up to 1,000 coins.

Should the Trophy make an appearance while you’re already in free spins mode, it can give you 2 to 4 extra free spins, the prize of up to 1,000 coins, or the Wild Reel feature.

If the Wild Reel is triggered by the appearance of a Trophy, only during the free spins, then you will find that one reel will get all its symbols transformed into sticky wilds. The reels 1 to 4 are the ones that this can happen on, though only on one of them at a time.

As you can see, it’s not quite a standard mix of features that we have here. Though we have wilds, scatters and free spins, we also have trophies that can trigger Wild reels, along with sticky wilds on several occasions.

Don’t expect the game to give you the option to change the lines too much. You get 25 and that’s how many coins are going to be needed for your wagers as well. That’s why the minimum bet allowed in Bicicleta can’t be lower than $0.25 because each line needs to get at least $0.01. The maximum bet will be allowed to go to $100 so that you use $4 for individual lines. The betting option that you change is always the coin value, and this influences the total bet.

Something that seems to be true of pretty much all slots from Yggdrasil Gaming, but Bicicleta has an RTP of 96.3%, so it’s above the 96% mark, a bit of a psychological limit these days, which separates good games from below-average ones.