Black Gold Megaways is a slot machine that StakeLogic is offering in an increasingly crowded category, but also quite popular these days. There are plenty of players interested in another version of a Megaways slot, particularly one that has a new theme and lots of features to explore. It’s what this game is offering, all while using an oil drilling inspired theme, which appears to have been lifted straight from Texas. Its huge game area delivers as many as 117,649 Megaways/Ways to win, using 6 reels with 2 to 7 symbols landing on each one.

There is plenty more to explore in this game, besides the oil fields, and I’d like to mention its features here: 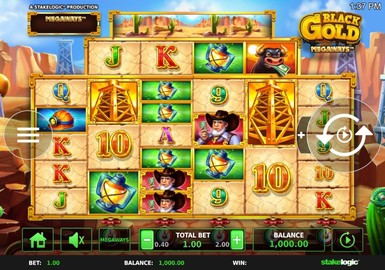 For the theme of Black Gold Megaways, we’re looking at an oil rig and at the Texas billionaire that owns it. It’s been done before, it’s not particularly special, but for the Megaways category, it’s the first one to approach this particular topic. We’re not used to seeing great designs in these slots, and Black Gold doesn’t do things a lot better than others of its kind, but I would at least consider it an above average option in terms of graphics quality.

If we look at the background, we find oil rigs on a field, at night, in a Texas location. On the reels, we get icons with bulls holding cash, Texan billionaires, oil rigs, dynamite, helmets, lanterns and the usual Royals starting from the 9 and getting to the A. Unfortunately, the lesser symbols are not getting any kind of special treatment, they’re the same ones we’ve played with before, in a lot of other slots.

The basis for Black Gold Megaways is the same system with random ways to win, that we’ve seen in plenty of other games by now. The most that you can have is 117,649 Megaways, provided that on the 6 reels you get the maximum number of symbols, up to 7 possible on each one. A horizontal reel will be present at the top of the middle four reels and will be the one to bring bonus symbols and new features.

Whenever winning combinations get formed, the game will trigger the Cascading Reels mechanic. It takes away symbols which are part of those combinations and brings new ones in. During free spins, this also boosts the multiplier.

The wild symbol shows up as a Dynamite icon, which will be used in the game as a replacement, and it can contribute to all winning combinations that way. There is a chance that such wilds will appear on the reels at random, with multipliers between 2x and 10x to be applied by them. If you get two or more of these wilds, then they multiply their multipliers, and the boost to the wins could be huge.

On the horizontal reel, which you get on top of the reels 2 to 5, besides regular symbols, there is also a chance that you will get bonus feature icons. Five different options could land there.

Destroyer: only for losing spins, it will remove regular symbols from all reels.

DoubleUp: 2x multiplier applied to all wins of that round.

Random Wild: a single wild is placed somewhere on the reels.

As for the final feature of Black Gold Megaways, that’s where we find the free spins. It’s a common option in Megaways slots, and it has the same excellent potential as its predecessors. What this means is that for the entire duration of the 12 free games that you get via 3+ Oil Rig scatters, there is an increasing multiplier, which goes only up whenever a win forms. It will not reset between spins.

All Megaways titles are similar in this regard, they tend to offer limited betting options, and whatever amount you choose, it will apply to all ways to win available that spin. In this case, the smallest bet available is $0.20, while the highest one will reach $20.

One of the many reasons why players tend to love games using Megaways is that their payout potential is very high. It’s true for Black Gold Megaways as well, and the game is capable of paying as much as 14,400x the stake in a single round, or up to $288,000 cash. Naturally, that kind of prize is the most that the developer allows the slot to pay, because the potential is much higher otherwise, in a slot with wins of up to 50x the stake per combo.

The Medium volatility that’s been announced for Black Gold Megaways is a big reason why players might want to give it a try. As the majority of the slot machines using this system are classified as having High volatility, having one which is just a Medium means that you are less likely to lose your entire balance quickly.

The final element of the puzzle would be the RTP, which in this case is at 96.03%. It’s just the average of the industry, and there will be some games of this type with higher figures, but it’s not a downside in any case.

Verdict: Black Gold Megaways will offer the player certain things that you don’t get in all slots of this type, and that might just make it a favourite for many of them. What I liked about it, is the combination of only Medium volatility, top payouts which get up to 14,400x the stake, a long list of features than regular, as well as an OK RTP level.

While I wouldn’t call the graphics of Black Gold Megaways exciting or particularly modern, they’re certainly above average for a category in which most developers seem to neglect this aspect.

Since I don’t expect that you would pick a Megaways slot machine because of its graphics or theme and because in every other area it does very well, I would recommend it to any fan of this type of game.