Among the many pretty and bright looking slot machines that Betsoft has released so far, you’re going to find darker titles as well. The Blood Eternal slot would qualify in that category, as a video slot with a Gothic style of design, with two vampires for its main characters and with all sorts of images to fit the genre. It’s a dark look, but one that fits the story that they’re telling.

The game keeps getting interesting, the more you look at it. For one, there will be 6 reels available for you to spin, while the number of lines will be fixed at 30. Moving on, there are a couple of features that you’re going to encounter, such as: 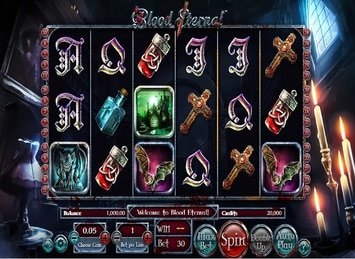 The scary vampire genre has quite a few representatives at online casinos, but it never hurts to get another one if it’s well designed. Betsoft has enough experience at doing just that, and they give us a dark looking design, with the action taking place in the sort of medieval castle where candles are still used to light up the place. You see the Moon’s light from a window, you get black reels and symbols that show you Vampires, Victims, the Castle, a Cross, a Gargoyle Statue, a vial of holy water, another one with blood, the Single/Double Bats and Gothic style letters as the Royals.

Blood Eternal might be satisfying or not to players as they look at its top payouts or RTP, but there is no complaining when it comes to how unique the features are. There are several that look interesting here, so they tried to do well and keep things fresh.

It starts with the Vampire Free Spins, which are triggered whenever a Vampire symbol finds a Victim. To do this, you need a Vampire icon landing next to one of the Human symbols. You get 8 free spins out of the game if this happens. If the same thing happens once the free spins are already underway, then you win an additional 8 free spins. The triggering symbols, both Vampire and Victim, are locked in their position and transformed into wilds for the free spins. From each pair, you get 1 to 4 wilds during the free spins. New pairs that form during the free spins will generate additional wilds, as many as 8 of them placed on the reels. The cool thing is that the new wilds are generated via the Blood Splatter that originates from the Victim bitten by the Vampire.

The Vampire symbols are with a woman and a man, and they’re present on reels 2 and 5. The Human symbols are similarly split, and they will be shown on reels 3 and 4.

Another major feature that is introduced in Blood Eternal slot is the Double Bat. This is a symbol that gets a Single Bat version as well. You will be forming combinations with these Single and Double Bats, and you get paid based on the number of times this creature appears on a line. The slot’s jackpot is actually delivered with its help since 6 Double Bats will give you 12 Bats total and a payout of up to 50,000x.

By the looks of it, the most average looking feature that this slot has to give us is the Wild logo, shown with blood splatter around it obviously. With the exception of the Free Spins triggering symbols (Vampires & Victims), you can get them to replace any other type. They count only as a Single Bat when they appear in that particular type of combo though. Out of the regular combinations, the Wild’s own will pay the most, up to $3,750.

Any bet that you’re going to use in Blood Eternal slot, will have at least 30 coins in it since there are as many active lines to cover each round. You increase the bet in two ways, through the number of coins per line or their value. The former allows you to have up to 5 coins used in a single line bet, while the latter uses denominations of $0.01 to $1. With 30 to 150 coins in a bet, the actual value can range from $0.30 to $150.

The really big payouts that are available will be coming through one of the special symbols offered by the game, the Double Bat. Have six of these, for a total of 12 Bats on an active line, and you can get a win of $50,000.

There are some elements to love about Blood Eternal slot, but I wouldn’t put the average theoretical RTP among them. It’s set to 95.03%, so it’s lower than many other games that you see released right now, from most developers. The top jackpot might look appealing, but the regular wins are not going to be very high in value.