Book of Ra Deluxe slot is one of the most successful games that Novomatic has released, and it’s been doing very well in land-based casinos for a long time now. The developer created an online version for it which has met with similar success, and they’ve done it via their online development arm, Green Tube.

As for the elements that make up the Book of Ra Deluxe experience, to start with you’re looking at a 5 reels and 10 lines game. Moving on to relevant features that have been implemented in this game, you will discover that it has: 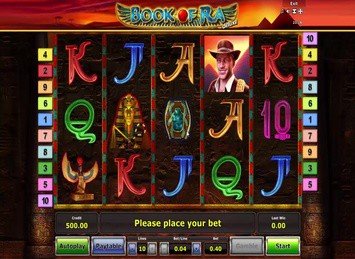 As the game’s title gives it away, this is a slot that follows the Ancient Egypt type of story which we’ve been told before. There is an Explorer or Adventurer type of character, a regular Indiana Jones, which appears in the main role. He’s exploring the temples and pyramids of Ancient Egypt, so in other positions on the reels, there will be major symbols with the Book of Ra (wild/scatter), with the Pharaoh, a Horus statue or a Scarab. Less relevant and uglier symbols are the playing cards, which are ranging from 10 to A.

If you’re used to online slot machines, you will notice that there is significant room for improvement in the graphics of the Book of Ra Deluxe slot. It’s understandable, since it’s an older game and coming from the land-based market, so just know that you can do a lot better visually online. 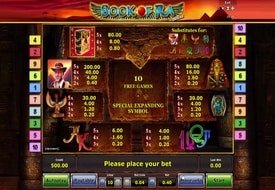 Feature-wise, there are some elements that will make this game exciting, but the list is not very long. The action relies mostly on strong gameplay and its top win potential, and it was enough to make it successful.

You are getting a wild symbol here, same as in every other game you see these days. It’s the symbol with Book of Ra that has the honour, and you will see it often enough in the game, as a substitute in all sorts of regular combinations. It works with regular symbols in that regard, all 9 that the game uses. Wilds will even pay directly if they appear enough times in view, but the payout they award will not be the largest one.

Deciding to shoot two birds with one stone in a way, the developer gave the Book of Ra symbol the role of the scatter as well. What this means is that the slot will not only use those wild symbols as substitutes and prize triggers but also as scatters that will give you free spins.

In order to trigger 10 free spins in this game, you need at least 3 Book of Ra scatter symbols. Obviously, you just need them scattered in any positions on the reels, they don’t have to form a combo. They also have one extra feature for you, in the form of an expanding symbol. Once you’re in the free spins mode, you may re-trigger it via the same scattered Book of Ra icons.

The Expanding Symbol, which is going to be selected before the free spins start, is going to behave differently compared with a regular symbol. For starters, the wild symbol will no longer be able to substitute for it, even though in the base game it could do that. As the name suggests, this special symbol expands and takes over all positions on the reel, when it makes an appearance. The expansion is triggered if there are enough symbols on the other reels, to form a winning combo, so you see it happen only during the lucky rounds.

This is the sort of game that lets you select an amount for your individual lines, while also giving you control over the number of lines that are active every single round. There isn’t that much to choose from though, as only 10 lines have been placed on the game’s 5×3 reels. The individual line wager is starting from a minimum value of $0.04, and it can go as high as $10. The range of the bets in this game then becomes $0.04 to $100.

Interested in knowing how much you can take home while playing Book of Ra Deluxe slot? The jackpot of the game will come via the Explorer symbol, which will pay 5,000 coins, or at most $50,000 for a single paying combo. You do have expanding symbols during the free spins, so there is a chance you will fill up a screen with these icons, and that could lead to a payout of $500,000 from the 10 lines.

You don’t have a big RTP in this one, and it’s not surprising since it’s coming from the land-based market. The figure sits at 95.1%.