Review of Break Away Deluxe Slot by Microgaming

Break Away Deluxe slot continues a fairly popular series from Microgaming, one that inspires itself from the game of hockey, one of the few slots to do this in fact. We’re looking at an improved version of Break Away, where you can select how many lines are active, and you get up to 88 of them, on 5×5 reels (the original had 5×3 reels). While the graphics have largely remained the same, the game clearly stands out, particularly once you check out the major features available.

As for the list of major features that you will discover in Break Away Deluxe, this slot offers: 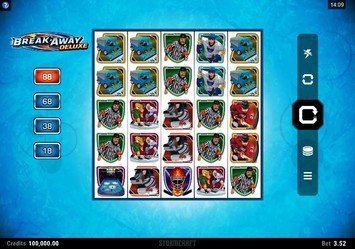 Those that have played the original Break Away, will recognize what they’re being offered in the Deluxe version. It’s the same hockey-themed slot machine, which places us on the ice ring, in a match between two teams. The developer didn’t change much in the slot’s graphics, they’ve mostly kept the same icons and overall look as before, so the improvements are not as visible in this area.

They did modify the game’s layout, so instead of having 15 symbols in 5×3 reels, you now play with 5×5 reels and 25 symbols (88 lines). It’s a major change and one that gives you a different experience.

Even though they haven’t updated the game’s graphics, I’d say that the quality is very good even so. Only themed symbols have been selected, something that’s to be appreciated when you see how many game designers are lazy and throw in Royals in half of the available positions.

In this case, the symbols which are included range from the game logo and ice puck (feature symbols), to several hockey players, the referee, a Zamboni machine, ice skates, helmets and the hockey field.

You might be getting a huge game area, but the slot still relies on the usual paylines, up to 88 of them being activated each round. Whenever winning combinations form, the game will use the Rolling Reels feature, to remove winning symbols and to allow others to come in. Multiple waves of winning combinations could be formed this way.

Super Stacked Wilds: You can get the game’s own logo to help you out along the way, this being a symbol which has the ability to substitute for any of the others, whenever it’s landing as part of a regular combo. While you’re going to get it super-stacked, the game limits its appearances to the last three reels, while using the paid spins. It does better for the free spins mode, appearing on the reels 2 to 5 there.

Random Smashing Wilds: Triggered at any point, this feature will use the image of hockey players, which appear as the spin starts off. They will transform 2 to 4 reels into wilds, guaranteeing you winning combinations that spin. The Rolling Reels mechanic will be active here, and can very well result in additional prizes.

Free Spins: Those looking for the scatters, will find them in the form of images of Ice Pucks. These scatters are only useful when appearing a minimum of three times, but the good news is that it’s not important where they land.

The resulting feature will consist of 12 free spins. In this mode, you get several advantages, compared to the base game. You can also re-trigger this feature, you just need another set of 3+ Ice Pucks on the reels.

For one, the super-stacked wilds are now going to be present on four reels, rather than three. With each new free spin, the game adds one extra wild to the super stacks, improving the odds of these symbols appearing and being useful to you. The name of this feature is Growing Wilds.

Even though the game area is huge, at 5×5 reels with up to 88 active lines, Break Away Deluxe slot doesn’t force you to play with all of them. You can select a level of the wager which has fewer active lines, with the options given being for 18, 38, 68 and 88 lines. You spend anywhere between $0.18 and $44 per spin, as you select those wagers.

Excellent rewards, even as high as 3,000x total stake, are possible while you’re playing Break Away Deluxe slot. Keep in mind, the game has multipliers as well, of up to 8x, so several things need to happen at just the right time, in order for the slot’s highest potential to come through.

RTP wise, the calculations show that you can get a different return, based on the number of lines active. You get it at 96% typically, but it can be as high as 96.88%, provided that you’ve activated all lines for your spins.

Verdict: Break Away Deluxe will not improve on the graphics of the original, but even so, it does enough with its features, top payouts and RTP, that the new game seems like a significant improvement and a good addition to the series.