The Chinese god of wealth is making a return in Caishen’s Arrival, as it appears to do in a lot of other slot machines which are destined for use in the Asian market. Featuring high-quality graphics, and most symbols that are standard in such games, it looks like the typical title for this category. On the other hand, don’t let its simple layout with just 5 reels and 25 lines deceive you. It’s one of the more exciting and highly volatile games that Betsoft has launched so far, with top payouts among the best that the industry will deliver. As its best features, the game lists the following: 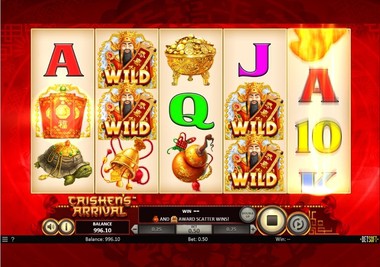 Wealth seems to play a big role in most slot machines that developers are making for the Asian market. Caishen’s Arrival is a fairly typical game in that regard, a slot where the Chinese God of Wealth is the main character. The style of the design is going to be similar to other slots from this category as well, with a lot of gold in its symbols, and plenty of red outside the game area.

As for the symbols that show up on those reels, Caishen is the one acting as a wild, the Red Envelope is one scatter, and the Coin Purse is another. Regular symbols are a mixed bag, with very simple Royals in low paying positions, and with higher value Turtles, Gold Ingots, Bonsai Trees, Noisemakers, Bells and Bowls with Gold Coins.

At first glance, you might not think much of the features that are announced in Caishen’s Arrival. The list has on it wilds, scatters, free spins, multipliers, all the usual options that you expect to get in a lot of other games. However, look closely, and you will find that there are certain changes made to them, which mostly improve the action and turn the slot into something a lot more exciting.

Caishen himself will be observed in the role of the wild and used as a symbol which is going to contribute to all new winning combinations, provided that it’s present on lines where it can assist. The other requirements for a new combo still apply, so 3+ symbols need to appear left to right on the same line (a combination of regular symbols and wilds).

While the wild symbols are not used as triggers for the game’s feature, they do act as replacements for the Coin Purse scatters, and so they can deliver their wins as well. What this means, is that you can get paid up to 400x the stake if you have up to 5 wilds present on the reels at the same time, or if there is a mix of Coin Purse scatters and wilds. More on this feature below.

To take advantage of this particular feature, you need to land three wild symbols on the same reel, which would make them stack. With a full wild reel in place, the game keeps those wild columns sticky, and then gives you one free re-spin, where the other symbols change. It could mean new winning combinations, especially if the wild reel occurs somewhere within the first three columns.

For the game’s 10 free spins to be awarded, the player needs to get a Red Ticket on both the 1st and 5th reels, at the same time. These scatter symbols, and when they appear, you get that bonus. For the duration of the free spins, 3x multipliers are applied to all wins, and that’s how the game’s top payout gets over 30,000x, up from the 10,000x that the base rounds can offer.

As for the Coin Purse symbols, these will pay 1x, 8x or 400x the stake, when 3, 4 or 5 are in view. Wilds do count as scatters of this type, so they can help meet the requirements for a prize.

Placing a bet in Caishen’s Arrival is going to be very easy. Using the left and right arrows from the bottom, you go through a list of bet values, and you select the one that you want to use. Only 3 values are shown at any one time, out of the 11 available. A range of $0.05 to $5 can be used, so high rollers might not be satisfied with the options given here. It’s understandable though since the game’s jackpots have very high potential.

Speaking of jackpots with high potential, Caishen’s Arrival is an incredible game in that regard, one of the best that Betsoft has offered so far. Payouts of up to 33,817x the stake are a possibility, which would mean over $169,000 paid in a single round, all with a wager of only $5.

Wondering how you can get that big of a payout? Cover the reels with Turtle symbols, and get paid 10,000x the stake in the base game (400x per 5-symbol line). Do the same for the free spins, and have 3x multipliers triple that amount.

While the potential for a big payout is there, it should be mentioned the obvious thing here, that the game is not going to pay this much to a lot of players. Designed to bring casinos a profit in the long run, such slots are expected to pay rarely.  When they do offer a good payout, they can make a few players rich. The high volatility is expected though, and players that are looking for slots with bit potential will expect it.

95.74% is the expected Return to Player, calculated for the game’s lifetime, not just for a single player’s sessions.

Verdict: Slot machines with very high volatility, and the associated huge top jackpots that become possible in such cases, are quite popular these days. Betsoft is trying to take advantage of that, and they’re testing the waters with Caishen’s Arrival.

It’s one of the best paying games around right now, in terms of sheer potential, but one has to keep in mind that high volatility is what makes this possible. If you’re a casual player, this is not the type of game you want to be risking your funds on, but experienced gamblers will likely find it an appealing option, knowing full well what they’re getting themselves into.