Chibeasties slot is one of the few online slot machines from Yggdrasil Gaming that got the chance to be part of a series, and it’s due to the popularity of the game’s main characters that this happened. The Chibeasties are cute whimsical creatures that live in a magical forest, and that’s the entire theme of the game in a nutshell.

The game is playable through a relatively average looking setup, with 5 reels being occupied by 20 active win lines. Looking at the features that were introduced in it, those also have their fair share of standard options, such as: 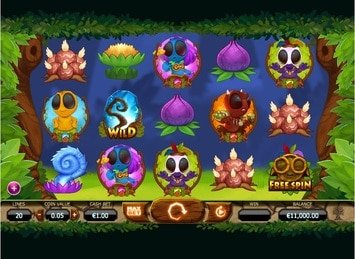 It’s a bit of a made-up theme that we’re getting here. Chibeasties slot proved quite popular for Yggdrasil Gaming when it launched, in 2015, and these days there is even a second slot machine in this series. The Chibeasties are supposed to be creatures that live in a magical forest, members of a tribe based on what they’re dressed like.

The reels will get several of these symbols that have Chibeasties in them, both male and female, while the lower-value images will show off some of the plant life from the forest, mostly carnivore plants by the looks of them.

The bets of Chibeasties slot start from a relatively standard amount, of $0.20, which would ensure that all lines are being activated, but with the minimum possible value of $0.01 in each case. If you want to go higher, you will have to pick a bigger coin value, up to $2 is allowed. The maximum bet that results from this is worth $40.

Yggdrasil Gaming mentions that wins are limited to maximum values of $80,000 in Chibeasties slot, but the slot will not pay more than $1,500 for its best winning combinations. There is the usual average RTP, of 96.20% in this case, so it’s as good of a slot as any other when it comes to odds of winning. You get a game with a volatility that is medium to high.

A couple of features were implemented in Chibeasties slot, both standard options for a lot of games, though in this case there are some extra abilities that were pinned on the free spins, to make them more appealing.

The wild symbols are easily recognizable since you can go by the Wild logo that is incorporated alongside a blue crystal and a tree’s branches. Have such symbols show up in view on the reels, but in the right position to allow them to replace others and be part of winning combos, and you should have a lot more winning rounds. The feature is a valuable one, but don’t expect it to make miracles. You can use wilds only when you combine them with regular symbols, not with scatters.

The scatters are just as easy to recognize, though this time you’re looking at a Free Spin logo, placed underneath a wooden representation of a chibeastie. Scatters may appear in any position, and as long as three, four or five are on the reels, you win 10, 20 or 40 free spins.

There is an extra benefit to the free spins and the way they work. At the start of the free spins, the game picks a single random symbol to be turned into an expanding symbol. Whenever that symbol appears on the reels, it expands and takes over all positions on its column, but only after the initial winning combinations are formed and paid. Once the expansion occurs, you might get additional wins. With some luck on your side, you will get the wild to be the expanding symbol.