Rival Gaming’s Cosmic Quest II: Mystery Planet slot is the next instalment of the Cosmic Quest line of games and it boasts 5 reels and 20 paylines. The game is set against a view of the galaxy, which makes it clear that the game is completely “out of this world”. To emphasise the space theme, players will come across symbols that include a radio, spacecraft, planets and a robot. Players will want to keep a sharp lookout for the symbol of the glowing red planet, since five of these appearing on the reels will award players with 500 times their bet. 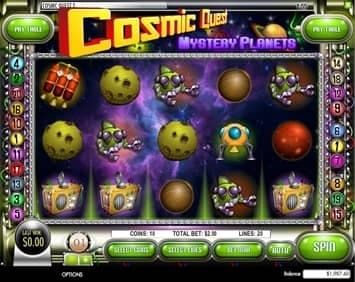 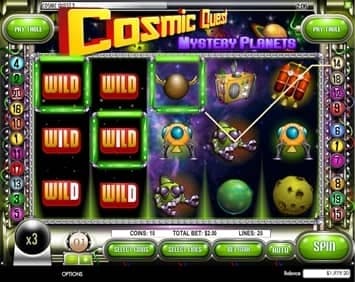 The Cosmic Quest II: Mystery Planet slot graphics are very colourful and will have players entertained right from the start, but this is not the only thing that the slot has to offer. Rival Gaming has worked hard to create a memorable game that might not have a unique theme, but it most certainly has an entertaining one.

The 5 reel, 20 pay-line slot boasts wilds, scatters and multipliers, all of which add to the thrill of this stellar game. Players can bet between 1 and 10 coins on each line, as well as between 0.1 and 0.25 in terms of the size of the coins. The jackpot is currently set at 5000 coins, which is very sizeable and gives players yet another reason to try their hand at this exciting slot.

The Scatterstronaut bonus is a great feature that is triggered when three of these special symbols appear on the reels. The moment the feature is activated, players are given the chance to play an arcade-like game that requires they navigate a spaceship through a cavern, which is quite narrow. They will need to reach certain landing platforms in order to claim prizes, and whenever they crash, the prize gets smaller. While this game might be challenging, it is also one that players can improve upon with experience, and this only gives them another reason to keep coming back to the game. It is bonuses such as these that set games apart, and it is clear that this is precisely what Rival Gaming has attempted to do.

The “select coins” and “select lines” will allow the player to adjust the size of their bet when playing Cosmic Quest II, while the “bet max”, “auto” and “spin” buttons will all set the reels in motion. By clicking on the “bet max” button, players will have the reels spinning for a certain number of spins without having to click for a spin each time.

The Cosmic Quest II: Mystery Planet slot is another great addition by Rival Gaming and it gives players many reasons to start spinning the slots on this title. Not only does the game offer some great graphics, but it also boasts a fun and unique bonus game that will draw players in. This bonus game is challenging enough that it requires some practice to get the hang of it, but it also comes with the promise of some exciting prizes and this gives players the motivation they need to keep practising. Overall, this is a great new title that players will enjoy for years to come.