Cosmic Quest I: Mission Control slot is another Rival Gaming title, and it is the first of a very popular line of the games with a space theme. The game has a very quirky design, and players will come across symbols that include an astronaut, helmet, dog, food tubes, flying objects, a ray gun and a space station. Some of the symbols that players will want to look out for include the monkey in a spacesuit and a pink pilot. The red rocket symbol is the wild symbol, and players will want to make sure that they look out for it because it not only offers players some extra wins, but it also becomes expanding wilds during the scatter game, and this is just another reason that players have to look forward to this game. 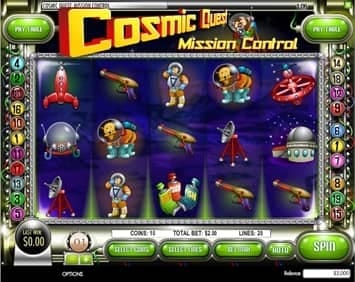 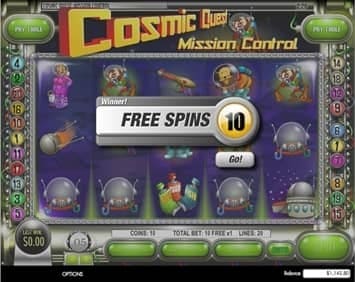 Rival Gaming’s new title is a 5 reel, 20 pay-line title that offers wilds, scatters and multipliers. Players can bet between 1 and 10 coins per line, as well as between 0.01 and 0.25 in terms of coins size. While this is not a huge betting range, it is large enough to ensure that things stay interesting and gives players the chance to claim some great wins. This title comes with an exciting jackpot of 5000 coins, which is sizeable, to say the least.

When it comes to bonuses, Cosmic Quest I: Mission Control slot offers an exciting range, including some unique features. Firstly, there is the Asteroid Blasteroid bonus that is triggered by the Pink Pilot symbol, which represents one of the scatter symbols. When three or more of these land on the reels, the bonus round starts and players will get the chance to try their hand at an interactive game where they will be required to destroy asteroids. The more asteroids the player destroys, the larger their prize will be. These sorts of games add an interesting element to the game that is both unique and challenging. In some instances, players will likely require some practise before they get the hang of the game, but this is most probably expected by players familiar with arcade-like games.

The free spins feature is triggered by the monkey in a spacesuit and when three or more of these appear on the reels, players are awarded with free spins. Not only are players awarded with ten free spins during this round, but they will also get the chance to take advantage of expanding wilds, which appear during these rounds. The rocket symbol might be just another wild during the base game when the free spins round begins, it expands to fill all positions in a reel in the event that a win is possible.

Players will first need to adjust their bet by clicking on the “adjust coins” and “adjust lines” buttons, before then spinning the reels with the “spin”, “autoplay” and “bet max buttons”.

Rival Gaming’s Cosmic Quest I: Mission Control slot offers players just about everything they could ask from an exciting slot – great graphics, a jackpot and a range of exciting bonuses, including a unique bonus round. Players have a variety of symbols that they will want to keep their eyes on, including two different scatters and a wild that converts into an expanding wild during the free spin game. This first instalment is a great start to a set of exciting games from Rival Gaming and it is sure to have players enthralled for hours on end. Overall, this is a great title that is as impressive as it is exciting, and it might fast become a favourite of players.