Double Dragons, a game that will get players excited based on the name alone, will feature the expected dragons in its overall design, but for the most part, it’s the mechanics and features of the game that will make you want to keep playing the slot. Yggdrasil Gaming is behind this release, a game that gets points for originality through its design, if not its theme choice.

There will be 5 reels in place, while on them wins are going to form on 25 active lines. Some of the important features that were added to Double Dragons include: 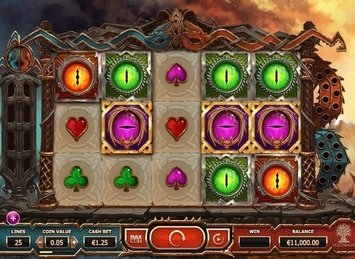 The dragons of fire and ice might be the ones to have inspired this slot machine, but in its design, they’re not easily visible. You have two of them, coloured in blue and red, surrounding the game area, but they’re made out of metal. The background is split into the two areas as well, with orange and blue mist to the sides of the reels. You have gorgeous decorations all around the five columns of symbols, including in the meters shown at the sides. What is less impressive is the actual list of symbols, where for the most part you will find just images of Dragon eyes (pink, blue, orange and green) and standard card suits.

All in all, I loved the surrounding graphics and the metallic dragons shown there, but on the reels, they chose their symbols poorly.

Betting is done pretty much as expected, using the available lines in their entirety, but with the coin value modified according to the player’s needs. That’s why you can spend as little as $0.25, at $0.01 per coin, or as much as $125, in which case the denomination makes the jump to $5.

This is the sort of game that relies on lots of features, which means that the lower payouts expected out of combinations are to be expected. The 125x jackpot that a single combo can deliver will mean up to $625 cash, upgradeable through the Ice Dragon multipliers (2x each one).

First of all, there is one feature that you will see often, and that’s the Dropdown Win. Getting any combination in this slot will result in the disappearance of all winning symbols, followed by the drop-down of new symbols in empty positions, so that new wins get a chance to form. It’s not a new feature, you’ve seen it before in slot machines, but it’s always good to have it.

The Dropdown Win can bring about multiple consecutive wins, and if you get at least four in a single spin, then you trigger a feature called Double Dragons. This will add two high stack wilds to the game area, each stack having between 7 and 28 wilds on it. There is a pretty good chance that there will be at least one more win that round.

The Dragon Heads are extra symbols, with images of a Fire or an Ice Dragon. Each one does something for you when it appears. The Fire Dragon transforms several regular symbols into wilds, while Ice Dragons apply 2x multipliers to your Dropdown wins.