Doubles slot is a game with a good idea behind it, though I’m referring to the gameplay style that Yggdrasil Gaming incorporated in it, not to the classic theme that influences the symbols that you see on the reels. If you want innovation, then this is one of the games from this developer that introduces something new, though not unheard of.

In the case of Doubles slot, the innovation comes from the symbols themselves, not from the layout with 5 reels & 243 ways to win. Looking at the major features, those come in the form of: 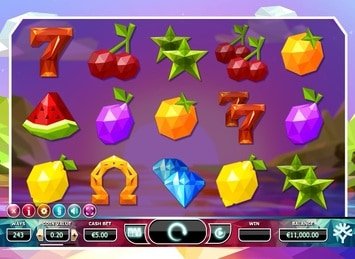 For the theme of Doubles slot, the developer chose to use the classic slot machine’s symbols, but the design manages to look somewhat modern. Even though on the reels you’re seeing images of plums, oranges, lemons, stars, cherries, watermelon, 7s and diamonds, they all seem to be made out of gemstones, cut to the right form and in an appropriate colour.

Though I’m not generally a fan of games with this sort of theme, I don’t mind it as much in Doubles, as the graphics style is different enough from what we usually see in classics. 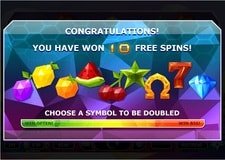 The special feature that the game borrows its name from will introduce a second type of symbol in it, besides the regular ones that will form combinations. While regular symbols are counted only once in the combinations that they form, the double ones are considered the equivalent of two symbols. Thanks to them, you could form a combo that has up to 10 symbols in it, even though only 5 symbol positions are occupied on the reels. The game looks only at the number of items that are on the line, so if it sees 10 diamonds or 8 horseshoes, it pays accordingly. For example, the latter is possible through four double Horseshoes, or through three doubles and two singles. The outcome and the payout are the same ones since in both cases there are 8 horseshoes in the combo. 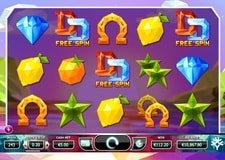 The free spins aren’t missing from the game either, but in their case, you’re not going to have “double symbols”. These are only simple “DD Free Spin logos” that appear multiple times on the reels, and this way they trigger 10 to 40 free spins. Something very interesting that I noticed in their case is that the feature gives you the option of picking a symbol that will appear doubled. You’re basically choosing your own volatility for the free spins. Do you want a small chance at a big payout, or do you want to win often, but smaller amounts? The game lets you choose.

With any slot machine that uses ways to win, the betting is going to be done on a fixed number of lines, since it’s easier that way. You are using 25 lines in this case, just for wagering purposes, and the amount that goes into each one varies from $0.01 to $2. The total bet can be very low, at $0.25, or as high as $50.

The right mix of five double symbols, the ones with the image of Blue Diamonds on them, will pay 25,000 coins to you, which would mean a jackpot of $50,000. There is a theoretical RTP of 96% that you need to take into account as well.