Dragon & Phoenix is a game that Betsoft Gaming has designed specifically for the Asian market, taking into consideration the things that would make it appealing to the local audience. The focus is specifically on China, which is what most games for that region will be based on, and it will involve the legendary creatures and characters mentioned by their stories. They’ve designed this one as a slot machine with 5×3 reels which has 20 active lines, pretty much as expected. As for the big features that they’ve decided to implement in Dragon & Phoenix, we found inside: 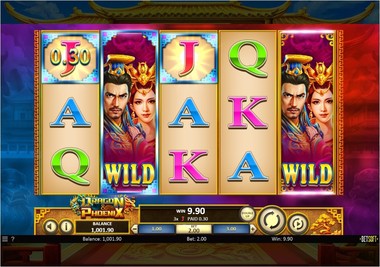 Dragon & Phoenix is one of the many Chinese inspired slots that the market has right now, and there are several new ones launched every month it seems. The focus on China is alright, but the fact that a lot of these games don’t offer anything new visually is not as OK.

Quality is average for the game’s design, but this means that most players will find it good enough, as graphics aren’t typically deal-breakers if the slot does well in other areas.

We find a Royal Couple as the expanding wild, a Money Tree as a scatter, and the other symbols range from Dragons, Phoenix Birds, Gold Ingots and Double 8s, to Jade Dragon Statues, Temples, Dragon Orbs and some very basic Royals.

Relying on expanding wild symbols, scatters and free spins, the game doesn’t appear to be overly original in this area. I appreciated the fact that they did make some improvements to how the game plays though, but you can read more about its mechanics below.

Expanding Royal Couple Wilds: You will find that the wild symbol of Dragon & Phoenix is represented by the emperor and the empress, together. These symbols are only added to the last four reels, but even though their ability to form combinations directly has been taken away, they got in return the ability to expand on their reels. That way, they can be a lot more helpful when you’re forming winning combinations with regular symbols, for which they can act as replacements.

Money Tree Scatters: The scatter symbols have an interesting mechanic in Dragon & Phoenix. You still need the usual three or more scatters in view, in this case, Money Trees, but it doesn’t stop there. The 3+ required scatters are going to pay you first, and then they will be removed from the game area. New symbols are allowed to come in, and if there are additional scatters, they too are considered for the upcoming feature. Up to 500x the stake is paid out by the scatter symbols, even before you reach the free spins.

The default bet that you get when you load in is typically set to $2, but fear not, the range available in Dragon & Phoenix is going to allow pretty much everyone to give it a shot. Take the wager down to as little as $0.20, or up to a maximum of $20 per spin. Given the number of lines which are involved, 20, you are simultaneously taking the line bet from $0.01 to $1.

Now, where the game does well, is in regards to its potential and the payouts it can deliver to its players. Dragon & Phoenix is capable of paying up to 8,098x the stake, and the maximum cash amount it can offer is $161,964.

RTP of the game is set to a healthy 96.01%, which is about the average these days, and the minimum value I want to see in a slot machine. This tells us that the casino keeps on average $3.99 out of every $100 spent on this machine, but this is true for the game’s entire life, being calculated for billions of spins.

With top jackpots at that level, the game has Medium-High volatility, but that’s to be expected. It’s fairly risky to play then, but not boring, as the hit rate proves. You can expect about 1 in 4 spins to be a winner (25.16% in the base game, and 24.52% during free spins). The chance for a Mega Win is 1 in 1877.

I’ve found several things that were enjoyable about Dragon & Phoenix, a slot machine which is well made overall. What I didn’t find as fun was the common Chinese style theme, which doesn’t offer the player something unique. It’s the same Chinese-style design that we see in a lot of other games, though a couple of the high-value symbols do appear to be fairly well designed.

On the other hand, if you don’t care as much about having interesting graphics in a slot machine, then I think you will like the volatility and potential of this one, particularly if you’re not a casual player and you understand that such games come with higher risk. Payouts of over 8,000x the stake await the player inside, and while that might be difficult to achieve, the potential should be enough to make the slot an appealing option. For someone that’s into Chinese-themed slots, and wants something with big jackpots, this is definitely one of the better options.