Dragon Wins slot is an Asian-themed video slot game by the innovative NextGen Gaming digital games provider. This game is all about fire-breathing dragons in a prehistoric setting, with sharp animations and an entertaining environment.

The game is particularly rich in bonus features, which makes it an attractive option for real money slot players who are after the big jackpot. 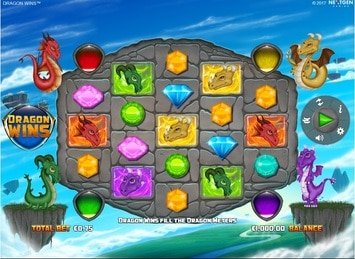 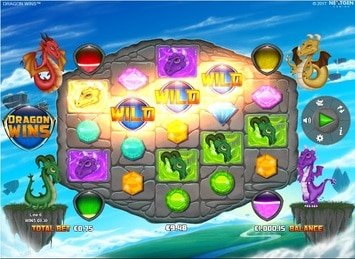 Dragon Wins boasts the cutesy dragons who entice players to the 5 reels and 40 pay lines with their ferocious fiery breaths.  The game can be played on desktop computers or all types of mobile devices for the ultimate in convenience.

NextGen has done an exemplary job with the game’s design, with the cartoon style graphics, clever animations and a wide range of colorful icons that dress the reels.

A lot of attention has also been given to Dragon Wins’ bonus features, and players are spoiled for choice with features that include two free spins features, wild reels, and more.

The randomly triggered Dragon’s Fire feature has each dragon breathing fire to increase your winnings by up to 10 times.

Form winning combinations with any of the four brightly colored dragons to fill the dragon meter. Once the meter is filled, you will trigger that dragon’s special feature.

Three or more scatter symbols trigger one of two free spins features the More Wilds Free Games feature or the Wild Reels Free Games feature.  The first rewards you with up to 15 free spins where specific symbols turn wild. The feature can be retriggered to see you earn up to 30 free games. The second feature rewards up to 10 free spins, where up to 3 reels at a time can turn wild. Again, this feature can be retriggered to enjoy up to 20 free games.

Gameplay on Dragon Wins slot is relatively straightforward, with a good betting range for most players. You can wager as little as .25 a spin and up to 125.00 if you are feeling brave.  The wild symbol will substitute for all symbols except the scatter to create winning combinations, and landing five of them awards you 20 times your wager.  Landing five scatters earns you a much more generous 2,000 times your stake!

As noted, Dragon Wins slot can be played on desktop, mobile or tablet devices, and you can try out the game for free at leading online casinos.

With its cool cartoon graphics, dramatic soundtrack and unforgettable characters in the form of dragons, Dragon Wins slot is a winning title by NextGen Gaming. This game offers all you could ask for from an online slot, with very convenient betting ranges, multiple bonus features including some truly awesome free spin features, and high paying scatter symbols.  NextGen has taken on the tried and tested dragon theme and added its own personal stamp of excellence to bring players a game that they will return to again and again.