Dwarfs Gone Wild Slot is part of Quickspin’s collection of slot machines, and one of the biggest productions that they’ve released for 2018. They advertised this game for months before it was released, and it was obvious that they considered it important. We can see why, now that the slot has been released, as the graphics and features that were included make it a lot of fun and I’m sure it will have a lot of fans.

As for the actual game that we’re getting here, it’s a 5 reels slot machine and it has 20 fixed bet lines that you will always use. Besides the excellent production value of the game’s design, the features are impressive on their own, as they give you: 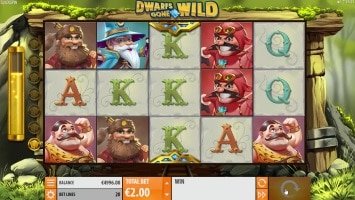 The inspiration for Dwarfs Gone Wild comes from the fairytale of Snow White and the Seven Dwarfs, made truly popular by Walt Disney back in the 30s. It’s been turned into animation movies, regular movies and all sorts of other types of entertainment, and it’s been a slot machine as well. Quickspin’s take on it is excellent, graphics-wise at least, with high-end graphics being used pretty much everywhere you look. Luckily, most of the symbols are going to show the seven dwarfs, along with Snow White and the game logo, so there was enough room only for three playing cards.

The image of Snow White, shown as a beautiful young woman that’s looking into a Magic Mirror, will be the trigger for a special feature when it appears somewhere on reel 3. It’s the Magic Mirror feature and it gives you additional Snow White icons on the reels (300 extra symbols added to the mix), after which 2 respins are triggered.

Dwarfs Gone Wild is based on the idea that each of the 7 dwarfs from the story of Snow White is going to bring its extra feature once the free spins of the game are triggered. You might get only one such feature, you might get several, or all, it depends on what happens in the base game. The Golden Minecart Bonus Meter is the one you see on the left side, filling up whenever you get a win that has Dwarf symbols in it. Fill up the meter, to get one of the seven carts active for the next free spins trigger. Each of the 7 carts gives you another extra feature.

To get the free spins, you need the Bonus Diamond symbols to land scatters, three times on reels 2, 3 and 4. These will give you 7 free spins. Depending on the number of Golden Minecarts that you triggered up to that point, you get several extra features, which are based on the 7 dwarfs.

You will get these features at random, at the start of each spin. You can have as many as 7 random features for the free spins, and several can trigger at the same time, so this is the feature that holds the most promise.

Even though the bet you’re using will always consider the 20 bet lines that are available inside, the amount that goes into it will respect that number and will start from a minimum of $0.20, so that each one gets $0.01. There is an entire list of potential bet values available to choose from, topping off at $100, where each line receives $5.

Looking just at the slot’s regular combinations, there are a couple that can pay $6,000 when appearing five times on all the positions of a single line. You have 20 lines that you can do this on though, plus the free spins can have up to 5x multipliers from the extra features, so the potential is for as much as $30,000 per line, or up to $600,000 total.

The RTP that’s been announced for Dwarfs Gone Wild is 96.38%, a number that should only be considered for the entire lifetime of the slot, so don’t expect it to be what you get from a single session.