The story of Electric Sam slot appears to revolve around a troll kingdom whose great leader is a funny looking troll with a crown on his head and with a red beard. He’s grinning at you from his own symbol and the name that’s been given to him is obviously Electric Sam. The game’s getting a mix with the classic fruit icons in neon outline form, but I’d still say that it has a lot to offer.

The popular ways to win system is available on 5×3 reels in Electric Sam slot, which means that there are 243 possible combinations that can be formed each spin. You also have quite a few interesting features to explore, among which there are: 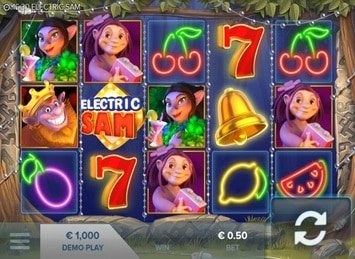 The theme of Electric Sam slot is one of the unusual things about it. It seems to involve a character, a king of the trolls, that brings electricity to his village. There are strings of lights hanging everywhere, there is this grinning troll with a red beard that is wearing a gold crown, and then there are two female trolls in major roles, a logo, a golden bell, a red 7 and various fruits that are using the electricity to power themselves up (being designed as neon signs). The fruits in question show the usual cherries, watermelon slices, plums, and lemons.

The graphics are excellent, and for the most part, interesting as well. Going beyond the images of trolls and the background image with a forest’s trees, you get to classic icons that aren’t that interesting even though they’re sporting good designs.

Like in other later ELK Studios slot machines, the option is available for you to use a betting strategy, which is selected from the betting screen. There are several for you to choose from, so read up on all of them before you pick any, if you decide to experiment with them.

The maximum possible wins of Electric Sam can bring the player up to 200,000 coins, with the obvious top value of $200,000. That’s just the highest amount possible in a single round, but regular combinations will pay at most 300x (3,000x is the limit during free spins). The Return to Player for this game was calculated at 96%, a perfectly average and adequate number for a modern release.

One of the things that I think you will enjoy the content offered by ELK Studios is that feature-wise they are creating unique experiences. This is visible in the number and the type of features offered.

For starters, one of the most common features around, the wild symbol, is also present in this game. You use it as a replacement, so by appearing on the reel where you need it, it will behave as a substitute for a symbol that’s needed there. It’s easier than ever to get paid, in a slot with ways to win.

Next, we have a Golden Bell, a scatter that you will be able to use to replace many other types of symbols. Such scatters appear three, four or five times on the reels, to deliver 5, 10 or 15 free spins. They don’t have to be on pay lines or on consecutive reels, just somewhere in view.

Now, during the free spins is where the things start getting exciting for you. New features are activated and they’re associated with symbols that you get during paid spins as well. Electric Sam himself is turned into a wild symbol. When present 3+ times during the free spins, he turns electric and replaces one symbol with a sticky wild.

Sandra is next, and she acts as a trigger for multipliers. In order to take advantage of that, you need once again her symbol present in a minimum of three positions. Multipliers ranging from 2x to 10x are awarded for your wins that round.

The third character in this game is called Maggie. Landing at least three Maggie icons on the reels, during the free games, will grant you access to a feature that involves Imploding Symbols. These will be zapped away, and you will have new opportunities to create winning combinations since new symbols will come in.