Epic Monopoly II might be the second slot machine from WMS to feature this particular theme, but if you look at this brand overall, you will find that there are a few different companies that have been doing the same thing. It’s not exclusive just to WMS, but the developer chose to add their flavour and style to the slot machine they’ve released, and it’s certainly going to feel different compared with all the others. The use of two sets of reels, one at 5×4 reels and the other a Colossal version with 5×12 symbols, will make all the difference in the world when it comes to how you’re going to see this game.

Another major area where this developer had a chance to do their own thing, is in the features section, and they chose to use their options like: 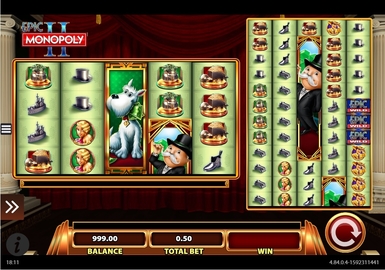 The theme is the expected one, using the most popular board game on Earth as inspiration. The look of the game is influenced by the usual graphics that accompany the board game, they didn’t have a lot of room to manoeuvre there, but that’s a plus for anyone that loves this franchise and recognizes it.

The symbols feature either Mr Monopoly, his dog, or the various characters and tokens.

The game is special and it does provide you with something unique within the Monopoly genre, but WMS has used the same type of setup before, so the Colossal Reel set is part of plenty of other games of theirs. The system relies on two different sets of reels, each one with its active lines. The Main set has 5×4 reels, while the Colossal set has 5×12 reels, and it holds the majority of the active paylines.

Some of the symbols landing on those reels will be regular-sized, while others will show up stacked. The stacked ones include the top-paying symbols, with Mr Monopoly and his Dog.

Epic Wilds With Symbol Transfers: Among the game’s special feature symbols, you will notice the Epic Wild, since it’s logo says those exact words. One way to use it is as a substitute which can be combined with regular symbols, to create new combinations. Even better, have wilds covering full lines, to get the best rewards of the game. It’s one of two symbols capable of offering those top rewards (5x the stake per line).

As these Epic Wilds have stacked variants in the Main Reels set, and they’re 4 symbols high, they can cover full columns there, when they show up. Should that happen, the wild will initiate a Symbol Transfer next. That same wild will be copied to the corresponding reel from the Colossal set, and it will expand and take over all 12 positions on it. As an example, if a wild symbol lands on reel 4 in the main set, and covers all four positions, the 4th reel of the Colossal set becomes entirely wild as well.

Symbol Transfers are only possible for the wilds, and only in certain situations, but they can be incredibly powerful.

Epic Wheel Bonus: The second very important feature symbol of Epic Monopoly II, is the Board Bonus icon. It is used as a scatter, and you can find it landing once on the reels 1, 3 and 5, on both sets of reels. As long as at least three of the six possible symbols are present, you get access to the Epic Wheel. If there are more, then the accompanying cash prizes are more valuable, reaching 100x the stake for six Bonus symbols.

Next, you click on the Epic Wheel, to spin it and get one of its rewards. It might bring you payouts of up to 500x the stake, up to 20 free spins, 2 to 10 dice rolls for a feature called Around the Board, an Epic Chance bonus game, or the option to Spin again.

Free Spins: If the result of the spin on the Epic Wheel is access to the free spins, then the feature starts and gives you 7, 10 or 20 rounds. You still get wilds and scatter symbols in this mode, but there are some changes as well.

I love the Symbol Transfer feature especially, as in this mode it triggers and expands the wild on its Main reel even if it only shows up once. Following this expansion, it does the transfer to the Colossal set, same as in the base game.

Should 3 to 6 Bonus symbols land on the reels in this mode, you are going to retrigger the free spins with the same number of rounds, adding a payout of up to 100x the stake as well.

Around the Board Bonus: Depending on how lucky you were, 2, 5 or 10 dice rolls were obtained for this bonus game. You have a token representing you on the board, and you use it to advance by many positions, based on the role of the dice. The position where you land determines what prize you get at each step of the way.

GO offers up to 16x the stake (800x the line bet), Water Works up to 200x the line bet (4x the bet), and then there are options like Railroad, Chance or Go To Jail. These are all going to contribute to the same Monopoly-like experience, where you mostly get small prizes as you visit all the usual locations.

Epic Chance Bonus: This one’s a picking bonus game, which allows you to make a choice, for one of the five shown cards. The result can be a prize of 200x to 500x the stake per line (up to 10x total bet), 10 dice rolls on Around the Board, a small prize and the option to pick again, or 20 free spins.

This gives you a chance at a better reward than the Epic Wheel offers directly, going straight for the maximum number of free games, cash prizes or dice rolls. It is indeed an epic chance.

The betting process involves the use of 50 coins, for 100 active lines, and so you’re often going to see the slot mention the fact that bets are per 2 lines, and rewards are calculated the same way. The minimum bet starts at $0.50 and can get up to $50.

With up to 500x the stake mentioned as the game’s best jackpot, Epic Monopoly II doesn’t offer the biggest rewards around, and it will pay up to $25,000 to those using its highest betting setting.

Considering its RTP, which is calculated at 96.01%, the game doesn’t do too badly in returning some of the player’s bets to him, in the form of winnings.

Verdict: If you’re a fan of this franchise, then Epic Monopoly II is one of the games to be paying attention to. It’s got loads of cool features, one of them even based on the board game, and giving you the option to roll the dice and advance on the map. The presence of two sets of reels, one of which is Colossal, adds spice to the gameplay, so that’s another plus. About the only thing that I’m not 100% happy about, is the use of rather low top payouts inside, of up to 500x the stake, but the lower volatility compensates for that.