Review of Flappers by StakeLogic

The glamour and glitz of 1920 have long been an inspiration for the entertainment industry, with some excellent movies, TV series, books and even slot machines being based on that era. In this particular case, it’s a StakeLogic slot machine that we’re looking at, and it’s called Flappers. The term was used back then to describe young women, the kind that had shorter skirts, bobbed haircuts and listened to jazz music, which in combination appears to have been scandalous behaviour. The game they ultimately designed looks modern, but with a 20s vibe that works wonders for its appeal. Setup wise, they relied on the usual 5 reels with 20 active lines.

As for the big features that were added to this mix, the list here will include: 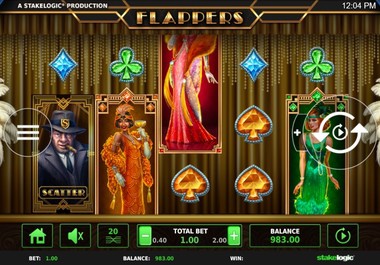 One of the most interesting things about Flappers would be its theme. The action takes us to the 1920s, and to the glamorous jazz scene of that era. The Art Deco movement influences the design of the slot machine and its background images. On the reels, we find the Flappers, the glamorous young women who didn’t adhere to the social norms. Sporting short haircuts, gorgeous dresses, drinking and smoking, their behaviour was scandalous for those times, even though these days it’s quite normal. The name given to them was Flappers, and so that’s why this slot machine is called that way as well.

The design of Flappers is a bit on the dark side, with a black background used behind symbols, but also with a golden border that’s beautifully crafted, with palm trees to the sides and various gemstones placed wherever possible.

Looking at the symbols used on the reels, the stars are the Flappers, four high-value symbols with the young women I mentioned previously. They’re shown drinking, smoking or just looking glamorous, and during the base game round they are stacked and capable of covering full reels. The next four symbols from the paytable are the card suits, each one using a different gemstone at the centre. Finally, as feature symbols, we discover the Golden Microphone Wild and the Mobster Scatter, both stacked 2 symbols high.

Overall, I found the graphics of Flappers to be impressive. The designers have put a lot of work into them, and the Art Deco style of the 1920s does a lot to help it as well.

Looking at the overall picture, we don’t find the most elaborate list of special features in the Flappers slot, but neither are these standard options. You have several wilds and scatters, along with stacked premium symbols, and things will change a bit along the way as well. 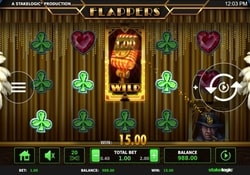 First, we should mention the wild symbol, which will appear with the image of a Gold Microphone. It’s a double-stacked symbol, so it takes over at most two positions on a reel when it is fully visible. The way to use it is in the usual manner, by having it as part of an active line where the other regular symbols are of the same type in the first positions from the left, so that they can create a new combination together. Also, as usual, you will not be able to use a wild Microphone as a replacement for a feature triggering scatter. 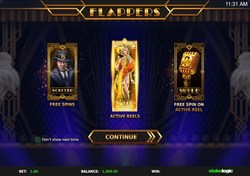 A nice touch, is the double-stacked scatter symbol, the one showing us the image of a Mobster. What’s nice here, is that it counts as a scatter both when fully or partially visible, so in a way, it makes it easier to get the required symbols and trigger this feature.

If you have 3, 4 or 5 Mobsters scattered in view, the game will offer you 8, 15 or 40 rounds in the free spins feature. The downside is that once inside, the Mobster symbol goes away, and so you will no longer be able to retrigger this feature.

Several things change, in the free spins when compared to the base game rounds. For one, you now get regular-sized high-value symbols, the ones with the Flappers. On the other hand, if there is a possibility to form combinations, these symbols will expand and cover the full reel, so you still get their help whenever they can assist.

Active Reels are also introduced with the free spins, anywhere from 1 to 5 columns being chosen for this, each round. Should a Flapper high-value symbol appear on one of these reels, they will then expand and be turned into a wild Girl. These new symbols, besides acting as substitutes, will also offer prizes of up to 1,000 coins for up to 5 on a line.

With the 20 active lines that the game gives you, the Total Bet option which you can modify will allow you to select only the full amount. The line bet is automatically changed then, so as you go from $0.20 to $100, the amount going to individual lines is anywhere from $0.01 to $5.

The part that most players care about when it comes to slot machines is the top jackpot that they can get. It’s not the only thing that matters though, which is why 1,798x the stake might feel low to some, even though it’s a good figure for the kind of risk you’re getting here. As for the cash value of that prize, the game’s top jackpot can reach $179,800.

The risk/reward needs to be at the right level when you play a game, and in the case of Flappers, we’re getting a medium volatility release. That is why its current top jackpot feels appropriate, and if you want a bigger reward, you will need to play a riskier slot machine.

Part of the game’s riskiness can also be seen in the Return to Player (RTP). For Flappers, two levels are possible, so it pays to check this figure before you start playing. Make sure you play this game at a casino which has the RTP set to the maximum level of 95.48%, not at the ones using the 94.47% setting. Even at its highest level, Flappers doesn’t do the best job in this area, and it’s a below-average return.

Verdict: Flappers appears to be designed for players that can handle some risk, without being at the extreme though. It’s not an ultra-high volatility option, mostly in the middle of the scale, which is where a lot of players prefer to stay.

It has a decent top jackpot to offer, up to 1,798x the stake, but the below-average RTP and the shortlist of features could prove to be disappointing for some players. Gorgeous graphics aside, Flappers is not a very complex game, on the contrary. Not everyone wants to be dazzled with a long list of features though, so its relative simplicity will work in its favour in some cases.

Overall, I found Flappers to be an enjoyable game, the sort of title that I’d recommend to anyone that wants good graphics and likes the glamour of the 1920s. Right now at the moment, Fruits4Real is the only recommended online casino where players can play Flapper for real money.