Fortunium is a new release that has found its way to the Microgaming powered casinos, and it’s a Steampunk style slot machine that I found quite enjoyable and unique, much more so than the majority of the games we’ve seen this developer launch in the last couple of years.

First of all, we’re looking at a game that has 40 pay lines, yet it uses 5×5 reels to host them, a very unusual mix for a slot. If we move on to the features, that’s where we will find: 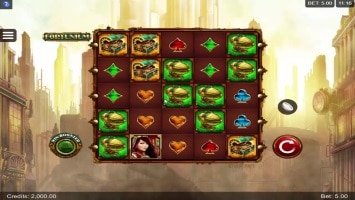 Fortunium is going to show off a theme that’s not rare in the industry, but which is very hard to pull off and it hasn’t always worked out for the developers that have tried it. The visuals tend to be important in a steampunk style game, and overall I feel like Fortunium did a decent job with this aspect. They’ve focused more on the images from the background though, rather than show off steampunk-style machines, the way other games have done.

For the game’s symbols, they started out with the two reel-high stacked characters, Maximillian and Victoria, but then switched to Wild logos, Green Orb scatters, the Question Mark mystery symbols, treasure chests, airships, Steampunk guns and various card suits.

The graphics style tends to lean towards the cartoon-side, but it works well enough for it. I could’ve done without the card suits, as those don’t add anything to the graphics, they don’t even make the attempt.

Though not exactly features, I’d start the talk about the game’s special symbols with the two main characters. Their names are Maximillian and Victoria, and they’re both shown stacked 5-symbols high. The rest of the game’s symbols are double-stacked. The obvious effect of this move on the gameplay is that winning combinations tend to form on multiple lines at a time when they do happen.

The Win Booster option is worth checking out, and while it will boost your wager at the same time, it also has an effect on the Mystery Symbols, which will now only reveal wild or high-paying symbols. These Mystery Symbols are super stacked and without the Win Booster, they can just as easily display low-paying cards when they transform.

In a symbol that shows some sort of Steampunk mechanism with a Green orb in the middle, the scatter has the ability to give away rewards of up to 100x the wager, should it appear in random locations enough times. As is often the case, they will also show you the way to the free spins.

The game has 10 free spins to give you, during which Mystery Reels are provided for the middle three columns. Only Mystery symbols are present on them, and they all transform into the same icons. The effect of these spins can be huge, especially since you can even get only wilds there.

Speaking of those wilds, the symbols are going to be useful in a lot of situations, and the Mystery Symbols give you a chance to land entire reels filled with these feature icons. They’re not that special otherwise since they have the standard substitution role and they form winning combinations that pay a relatively small amount of up to 200x. The prizes add up once you get several reels filled with them, particularly during free games.

The game can be played with or without the Win Booster active. Without, you have a wagering range that starts from a minimum of $0.10, as the game uses 10 lines for the betting system, even though there are 40 active. You have a couple of ways to increase the wager from there. One of them is via bigger values for the coins, since those get up to $0.50. The other is via the number of coins per line, which goes up to 25. You can spend $12.50 per line and $125 total if you want.

If you also activate the Win Booster extra bet, you will spend an additional 50% with your bets, which means that you can end up with a $187.50 bet.