You’ve heard of the saying, ‘crazy as a bat’ … well, even if you haven’t (or if you think we’ve just made it up) you’d have to be a little bit crazy to miss out on FruitBat Crazy slot by BetSoft Gaming. This game features a bat and some fruit, and the bat seems to like the fruit, so we’ll take it from there …

Who is Betsoft anyway?

Betsoft is a brilliant online slots provider with a catalogue of superb games behind them like Blood Eternal and FrutiBat Crazy being the latest release. Their slots are renowned for their amazing, cartoon-like appearance and their superb playability. It’s almost impossible to find a Betsoft slot that just isn’t very good.

If you travel to Malta you might just find yourself at Betsoft HQ, especially if you travel to the capital of Valletta as that’s where Betsoft is based. Betsoft has been around since 1999 when they were founded in sunny Cyprus. They have since moved to Malta when the sun shines just as much!

What the set-up of this FruitBat Crazy slot? 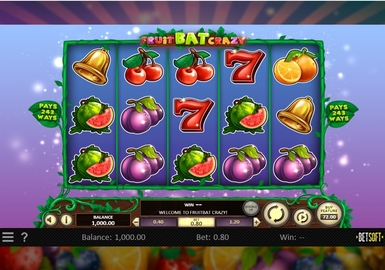 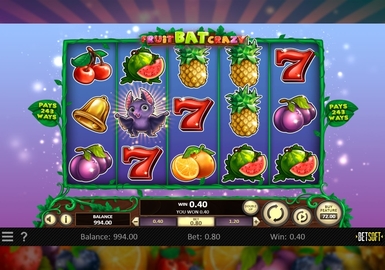 In terms of online video slots, most of them have five reels and three rows … and that is the very set up Betsoft have used here!

How do I win a payout when I am playing FruitBat Crazy?

You just need to land three or more identical symbols on the reels in sequence, starting from the left-hand reel. It doesn’t matter which particular line (out of the three) each symbol in the sequence lands upon – they just have to be consecutive. Of course, the biggest payouts are achieved when you land five identical symbols – one on each of the reels.

Does it cost money to play FruitBat Crazy?

You can play FruitBat Crazy for free, but if you don’t pay any money, you won’t win any money, it is as simple as that. You will be able to see the current value of your ‘cost per spin’ at the bottom of the screen. Click on the ‘-‘ button to lower your bet, and the ‘+’ button to raise it. The minimum overall bet amount is $0.08 (or your currency equivalent) and the maximum is $8.00. Each spin of the reels will cost you eight coins.

It goes without saying, but we are going to say it anyway – the more you spend per spin when playing this slot, the bigger the payouts that become available.

What sort of payouts can I win when I am playing FruitBat Crazy?

The lowest possible payout when you play this game occurs if you land three cherries, or three bells, for which you will be rewarded with a single coin. The maximum during normal spins is 80 coins for five pineapples. There are plenty of special features though that could see you winning considerably more than these amounts!

Oo … tell me about these special features!

The biggest special feature is when the FruitBat arrives on the reels. He (or she) is a scatter symbol that will win you both free spins and a prize amount. Just two FruitBats will earn you eight coins (although you will not win any free spins). If you fill the entire reel with FruitBats you will gain a cash award equivalent to 2,000 coins plus no less than 200 free spins! Free spins will win you prizes at the same rate as the bet that triggered them.

There’s the ‘Exploding Win Ladder’ feature too, which is described as ‘A Cascade of Fruity Fun’. Any symbol that is involved in a win will explode and vamoosh from the reels. New symbols will pop down to fill in the gaps that have been created with the potential to trigger new wins. This feature continues until no more winning combos have survived!

Any special symbols I need to be aware of, too?

The only special symbol here is a diamond (and yes, we suppose diamonds are pretty special!). A diamond symbol is a wild and it substitutes for all other symbols. How cool is that!

Anything else I need to know about FruitBat Crazy?

Yes! If you are feeling especially lucky then you can gamble all or half of your winnings on the toss of a golden coin. You double up if luck shines your way, and you can gamble as often as you like.

If you can’t wait for the free spins feature to flutter on by, then you can purchase it at any time for a set amount of coins. The current prize of the feature is displayed at the bottom right-hand corner of the screen.

How does FruitBat Crazy look and sound?

We have to put our hands up here and say that FruitBat Crazy is not graphically amazing, especially when compared to some other of BetSoft’s catalogue of amazing slots. This, however, is a fast-paced, easy-to-play game where tons of amazing graphics are not really necessary!

The music is maybe the kind you’d hear in a kiddies TV show. It doesn’t get in the way too much (and indeed sounds rather jolly) but it can be turned off if it grates too greatly!

So, what’s the final verdict on FruitBat Crazy?

If you prefer slots that are easy to play as opposed to being full of complicated features, then FruitBat Crazy is certainly the slot for you! This is a fast slot with some nice features and graphics and sounds that really do get the job done. Why not join us for going crazy for FruitBat Crazy at one NewCasino.org’s favourite casinos?