The Game of Thrones slot is a much-anticipated video title by Microgaming. This 5 reel, 243 pay line title is set in Westeros and is themed after the beloved television series of the same name. Because of this, players should expect the entire game to represent different characters within the series, and some of the symbols that will appear include the Iron Throne, the Game of Thrones logo, and the sigils of the various houses within that world.

Some of the first and most noticeable features of this game are the graphics, which is to be expected, and this sets the scene for a game that will draw players into the world of Westeros long before they start setting the reels in motion. Any game by Microgaming holds promise, and when the software provider teams up with a truly great brand, such as Game of Thrones, it can produce some truly exciting outcomes. 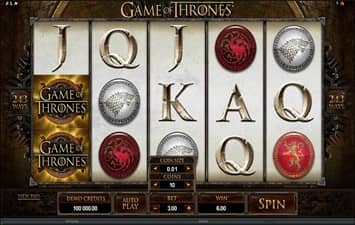 Microgaming’s Game of Thrones slot boasts wilds, scatters, and multipliers. Players can bet between 1 and 10 coins per line, and the game has a betting range between 0.01 and 0.02. Players stand the chance of winning a jackpot of 60 coins when playing this title. The jackpot is certainly not a huge one, but it is sizeable enough to draw a player’s attention.

One of the simpler bonuses being offered by the Game of Thrones slot is the Gamble feature, which can be activated every time the player wins something. This feature is divided into four stages and they are known as the White Walker, 3 Eyed Raven, Dragon, and Direwolf. Players will need to pick between heads and tails throughout each stage, and each time they are right, they will then move up to the new stage. In the event the player loses, the feature will immediately come to an end, but in the event they are right, their winnings will be doubled.

Players will want to look out for the scatter symbols, represented by the Iron Throne because these will trigger the free spins feature. It is during this round that the 4 Houses of Westeros will appear and players need to choose between house Stark, Lannister, Baratheon and Targaryen. The houses are each hiding a certain number of free spins, complete with stacked symbol and multiplier, and players have the opportunity to choose as many as 18 free spins with multipliers of 5x. Players will be very happy to know that the free spins feature can actually be re-triggered.

To start playing, the number of coins bet per line and the coin size needs to be selected. Once this has been done, players can then “spin” the reels, or opt for the “autoplay” button, which sets the reels in motion on behalf of the player.