Review of Gemmed Slot by Betsoft

A good design is something that I often associate with Betsoft’s slot machines, but innovation isn’t necessarily a strength of theirs. This makes Gemmed all the more surprising, being a slot machine that offers a new reel system, quite fun and potentially very profitable, though it does have a higher degree a risk built into this particular game. The less exciting side of it is the gem-themed design, which is a below-average look for a slot machine released by this particular developer. They crafted a game area with 9×9 reels, quite unusual since there are ways to win present there, 40,503 being the highest number of combinations that can form in a single spin.

You are looking at a slot machine which also incorporates a couple of features that should be interesting, and among those, I would mention: 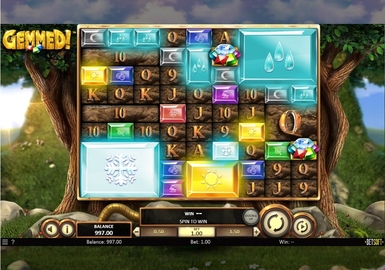 Betsoft, the creators of 3D slot machines of the highest quality in the past, which told little stories and were a lot of fun, seems to have put a lot more effort in the way winning combinations form here than in the design of the symbols that will do it. With gemstones which are nature-themed as top symbols, and with basic looking Royals as the low ones, it’s got one of the least interesting designs that I’ve seen from this developer.

First, a word about how the game is built, and the way the winning combinations can be formed. The game area has 9×9 reels and incorporates a system which is similar to the ways to win, though there are certain limitations there. What I mean by this, is that the combinations require matching symbols to be found either adjacent on consecutive reels, or in diagonal to each other. Some kind of connection does need to exist between the symbols in a combo, they can’t just be scattered in all positions on the reels, the way they would be in regular slots with ways to win.

On the other hand, not only are you getting a bigger game area, giving you more chances to form your wins, but there are also high-value gems that will land in all sizes. Some of these are still going to be regular-sized symbols, but others will show up in bigger variants, up to 3×3 sized or more. It happens quite often, and if the right symbols do it and they’re adjacent, you can end up with a large number of ways to win that get you paid.

That unusual system, which ends up getting you paid, is the one thing that makes this slot machine unique. Other than that, you’re not going to discover anything too interesting on the reels, as the features we discuss below are available in any other major slot machine, often enough in a better form.

Wild Symbols: Rainbow Wilds, which are called this way because they have a Wild logo in the front, and a rainbow inspired colouring in the back, will be present on most reels, except for the 1st one. This means that it’s not going to be allowed to create combinations of its own, but as you get it on 8 out of 9 reels, the odds are decent that it will be able to assist in some manner as you’re getting other wins.

As you’d expect out of a wild, this one works in a typical manner. It’s going to be used as a substitute, which can be included in any combo that you’re forming, provided that it’s present adjacent or in a diagonal with one of the symbols that are relevant.

Also as expected, you can’t use these wilds to take the place of scatters, those have to trigger their features on their own.

Not the most exciting wild symbol around, as it doesn’t offer any extra abilities, but it can be useful nonetheless.

Free Spins: Second, we also find that Gemmed can deliver free spins, and all it takes to trigger them is to have the right Cut Gems icons anywhere in sight, and a minimum of 5 times. The number of symbols that are present will decide how many free spins you get. 15, 20, 25, 30, 40 or 50 rounds are possible initially, as you get 5 to 10+ scatters. As the game doesn’t limit the number of scatters that can show up, you can have as many as 81 at the same time, though only the first 10 are important.

Getting you paid is even easier, as in that case you only need a minimum of 4 symbols present. The rewards go from 0.5x the stake for 4 scatters, to 10x for 9 or more.

These are scattered, so in their case, it’s not important where they show up, you just need them in enough positions.

The free spins don’t appear to do anything special, they just give you rounds for free, but with all the usual features. That should be enough to make them interesting though, especially as you can retrigger them by getting another set of 5+ scatters to appear.

Gemmed doesn’t feature the most generous betting system, but you will find that the options listed at the bottom of the screen will cover the needs of most players. Even though a maximum bet of up to $10 might not sound like much, consider the game’s volatility, and you will find that the wager is enough for a lot of budgets that people are working with. At that point, plenty will likely find the $0.10 minimum bet to be a good option as well.

This is one of Betsoft’s slots with High volatility, and so it’s going to have an above-average top jackpot to offer as well. You could walk away with up to 21,667x the stake of that round, which in this game could mean up to $216,670.

I like that they kept the RTP above average, at 96.46%, so even though the risk is considered in such a game, at least you know that you’re getting a good shot at that jackpot.

Verdict: It’s not going to be for everyone, I will mention that right away, but it should be obvious for anyone that knows how slot machines with high volatility work. On the other hand, if you’re looking for a slot machine that does bring some innovation in, but also has familiar features to offer, then you might do very well with Gemmed. I’m certainly a fan of its 21,667x top jackpot, or of the 96.46% RTP that’s announced for it.

I would recommend this game, but mostly to players that accept the high degree of risk which comes with a volatile slot machine, like this one. It’s a good game, provided that you know what you’re getting yourself into.