NetEnt has always been a pioneer in the world of online slots, they certainly did a bang-up job on this game. The first video slot featuring the all-new Avalanche reels, Gonzo’s Quest slot by NetEnt is something to write home about. The storyline is all about the fictional golden city of Eldorado, and one Spaniard explorer trying to find its exact location. The background of the game is set in Peruvian jungle of Amazon, with Aztec Pyramids in the backdrop. The gameplay is unique and quite enticing, offering 5 avalanche reels consisting of 20 paylines. As soon as you plunge into the game, you will notice several interesting things, such as:

Unfortunately, the slot doesn’t come with a Bonus game feature. 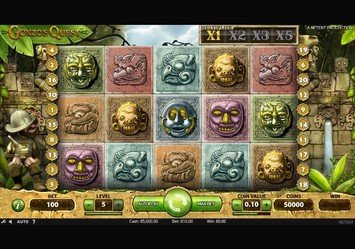 Released in 2013, Gonzo’s Quest slot by NetEnt is a five-reel 20 payline slot machine that comes with superb visual elements as well as an old-timey feel and look. NetEnt pulled no stops when it comes to design and production quality. The graphics are rich despite the game being set in rather a plain background with not much going on apart from the Aztec pyramids and Amazon jungle essence. If you love your slot machine quieter, then you will absolutely go crazy for Gonzo’s Quest. Gonzo, monkeys, and waterfall also accompany you as you cascade through the reels. It’s rather funny how Gonzo breaks for a dance once in a while as you go ahead with your play.

What’s more, the visuals for the game are rendered in 3D, so you can expect them to look absolutely fantastic. The theme of the ancient ruins of Peru is designed outstandingly. Also, this is accentuated by Gonzo’s actions as he stands next to the cascading reels, fully 3D rendered and animated to make the game truly exciting. The background sounds are the befitting selection of jungle sounds which sets the Amazon atmosphere right.

What sets Gonzo’s Quest slot by NetEnt apart, however, is the gameplay. It’s distinct yet easy to follow. Gonzo might not be one of the symbols, but there are 7 different common symbols that frequently populate the reels. They are all elaborate block carvings of the bygone Aztec era culture. Considering by color, the higher value symbols are blue, green, brown. Purple, orange, red, and light blue in that succession.

With that being said, there are 2 other special symbols that designate the Wilds and Scatters. The Golden Mask is the scatter symbol, while the Wild is represented by the Question Mark carving. If you land on the Question Mark (Wild) symbol, it substitutes for all other symbols except for the Scatters.

On the overall, the game’s graphics, design, theme, and visual elements are well thought-out. They are exciting enough to keep you playing yet not too distracting.

The first thing you’ll notice is that the Bonus Game feature is MIA. Even still, the Gonzo’s Quest slot by NetEnt comes with a variety of special features, but most notably the Free Fall Multiplier feature.

This feature is much akin to free spin features in most slot machines. It’s triggered when 3 Scatter symbols come into view in succession, starting from the leftmost reel. The player will be rewarded with 10 free falls. For every successful fall, your multiplier becomes bigger, going from 3x to 15x per win during the free fall feature.

Gonzo’s Quest has been designed in a manner which makes it easy for players of all levels to get around it. The betting rules of the slots are straightforward and simple, which means both veteran and newbie online casino players will start playing it in no time. The current version features 5 reels and 3 rows, a combo with accommodates 20 fixed paylines. The slot pays from leftmost reel towards the right. To start raking in wins, you must land 3 or more matching symbols on at least one payline. You can bet from as little £0.20 to as high as £50 per spin. The level ranges from 1 to 5, while the coin size starts for £0.01 to £0.5.

Other betting highlights include:

Given that you can wager from £0.20 to as high as £50 on every spin, Gonzo’s Quest slot by NetEnt is for both risk-averse and high-roller players. It boasts an RTP of 95% which considered high in the online casino scene. This medium to high variance slot machine comes with great audio and visual effects combined with all-new cascading reel movement. If you are looking for a truly unique slot to play online, this should be top on your list.