Holmes and the Stolen Stones slot gives us a chance to uncover a mystery, the way Sherlock Holmes himself would do it, and it’s Yggdrasil Gaming that created this beautiful game for us to play and enjoy.

As you’re finding your way through Victorian-era London and you help out Holmes uncover a mystery, you will have 5 regular reels at your disposal, with the 20 fixed lines present to form combinations on. The features involved will give you: 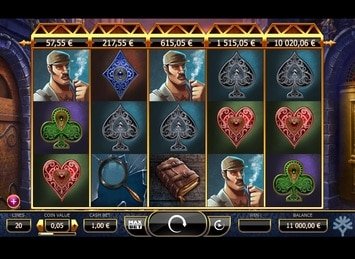 19th century London is the location of the game’s story, and the main characters appear to be based on Sherlock Holmes and Dr Watson, in one of their usual mystery-solving missions. In addition to symbols with images of keyholes or diamonds, you also have the two main characters, a leather journal, magnifier glass and four very elaborate looking card suits. 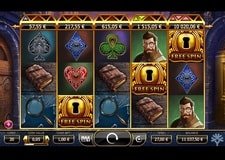 The jackpots that I mentioned above are obtainable through special Diamonds that are collected as you play the game. You need to have five of the same colour before you get a jackpot out of them. To form a single Diamond for the collection, you need to collect five shards of the same colour first, which is also a way for you to trigger 10 free spins. This is one of two types of free spins that you can trigger.

The second way to get into free spins is to get help from the Golden Keyhole scatter. Having it appear three or more times triggers the free spins mode. If you get four or five such symbols, there are also some rewards for you to look forward to, of up to 10,000 coins. 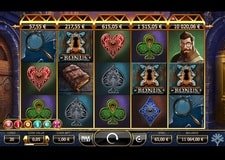 There is another scatter that you can get on the reels and that one also has a Keyhole as its image, just not as fancy looking as the other one. It’s also marked with the Bonus logo at the bottom, so it’s quite clear what it can do. It works in a similar way to the Free Spin scatter, so it triggers a feature if it appears 3+ times and it pays 1,000 or 10,000 coins if it’s present in 4 or 5 locations.

The Bonus Game that you get this way will allow you to look into various crates, and to get diamond shards and coin wins. The feature will end once you get the Smoke Bomb.

A high roller will not have the kind of betting range that he’d like if he tried out Holmes and the Stolen Stones slot. The game delivers 20 fixed lines and uses 20 coins, but the denomination for the latter will go only from $0.01 to $2. That’s why you spend as little as $0.20 to get the reels spinning, while at the maximum value you get the option of using $40 at most.

Things get more interesting if you check out the jackpots that can be obtained inside. First of all, you should pay attention to the five progressive jackpots which are shown above the five reels. They range in value, from two to five figures and you get them directly through the slot’s features. The better reward comes through the game’s free spins, which will deliver wins of up to 12,000 coins in an ideal situation, or $24,000 cash. Even the theoretical RTP looks a bit better than some of its competitors since it’s set to 96.8%.