iSoftBet is one of the many developers that chose to prepare itself for the 2018 World Cup by releasing a slot machine with football as its main theme. What they did differently is that they chose animals to represent the various countries. So there is a mix of wild and domesticated creatures taking part in a friendly football match, in the middle of the forest. It’s an excellent design, and the game has a few other pros to its name, which I will let you read about in our review.

If you look at how this game is played, you will discover that it’s using 243 ways to win and that they’re employed over a 5×3 reels area. Feature-wise, you’re looking at: 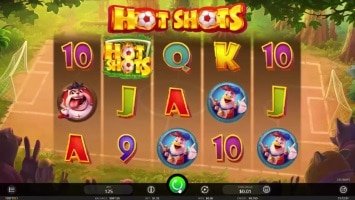 At its basis, what you get here first and foremost is a football-themed slot machine. There are things that iSoftBet did differently, compared with other developers that have released similarly themed games recently. While others went for the national teams on a huge stadium look, Hot Shots gets a team of animals that we’d associate with various nations around the world. They’re playing a friendly match of football, somewhere in a forest, on a dirt-based field.

The animals representing the different nations are the Bear (Russia), Wild Cat (Brazil), Bull (Spain), Bulldog (England) and Rooster (France). Other than that, the symbols will deliver logos or footballs, as well as cartoon-style playing cards.

The graphics created for Hot Shots are among the better reasons you would have to play the game. Not only are they different from those you’d find in most football-themed slots, but they are also of very high quality. The style is a cartoon-inspired one, but it works wonders for a team of animals playing football together.

One of Hot Shots’ special features, which will be especially interesting to you, is Wild Football. This symbol might not seem that interesting initially since it’s added only to the last three reels and it’s not capable of delivering a win on its own. However, it has a special quality that you’re not likely to find in another game easily, and that’s the fact that it expands both horizontally and vertically, by one position in each direction. It makes a cross-shaped wild this way, and all those positions on the reels will be used as substitutes in the formation of any new combinations. For a game with ways to win, this provides it with many new chances to create wins.

The other major feature is simpler, but still exciting thanks to the added multipliers. There are scatter symbols, which deliver to you free spins when appearing three, four or five times in view. There are rewards of 4x, 6x or 10x total bet as well, though I found them fairly small. The image of this scatters that of the Hot Shots logo.

The real value comes from the free spins, where 10, 15 or 20 rounds are offered based on the number of symbols you got as triggers. All your winnings will be tripled for the duration of the free spins, so this would be an excellent time to form a combination of five Russian Bears and get their reward.

That is it for the major features available in Hot Shots. The game doesn’t have a huge list of options for you, but it’s clear that you’re getting value from the present ones.

Setting up a wager for a slot machine which relies on ways to win usually requires you to do so for several fixed lines, which will be used instead. In this particular case, iSoftBet chose 25 fixed lines for the bet, each one with bets of $0.01 to $5 allowed on them (up to 5 coins of $1). The full range of such a bet would naturally be $0.25 to $125.

If you look at the paytable, while a 5 coin bet is set up, you will find that its best win can amount to 2,500 coins (500x the line bet) in the base game. This triples for the free spins, so you can get $7,500 from a single combo. With ways to win system, many wins could be forming simultaneously, so the potential is there to get a lot more. This is evident in the 97.15% RTP announced for Hot Shots, as it’s above average.