The 80s style Miami that we’re seeing in Hotline is going to take many of us back to the police TV shows of the period, and in fact, that’s what we have on the reels, with two main characters being the partners that are investigating a jewellery heist. On the other side of the barricade is a mysterious woman. The game’s name comes from a very special feature that we’re going to cover in this Hotline slot review.

30 pay lines are active on the 5×3 reels of Hotline. The game has several unique features, along with some regular ones. The list includes: 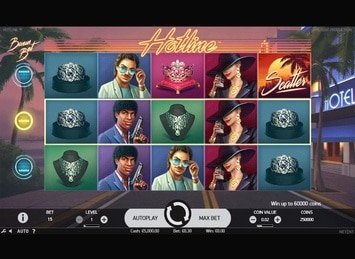 The theme that NetEnt seems to have gone for is related to a cop show from the 80s, one that takes place in Miami apparently. We have the two main characters, detectives that are both wearing suits that go well with the warmer climate, plus a third one as a rich mysterious woman that seems to be the villain of the story. She’s gone through with a jewellery heist, and you’re going to notice some gorgeous pieces on the reels, ranging from a Crown to a Necklace and a Ring, these being the low-paying symbols.

A lot of the game’s focus is going to be on the Hotline feature, which is normal since it even gives the slot its name. You basically start things off with a single Hotline active, which is a row of symbols, one of the three available on these reels (top, middle or bottom row). You can activate up to two additional Hotlines, but you will double or triple your wager while doing so.

In exchange for that higher bet, the game can deliver more expanding wilds and re-spins. First, we look at the wild symbols, which when appearing on the Hotline will expand and cover the other positions of the reel as well. It doesn’t expand if it appears outside the activated Hotline, but it still acts as a substitute if it happens to show up on the right line. It will just be a regular wild, rather than an expanding wild.

A Re-Spins feature is another way for you to take advantage of this game, being a cool bonus that could be highly profitable. The Re-Spin is awarded following a successful expansion of a wild on a Hotline. The expanding wild is locked in its position for that re-spin, so the other reels are the ones doing the spinning.

You don’t get just re-spins and expanding wilds in Hotline, you also trigger free spins if the necessary symbols appear at the same time on the 1st, 3rd and 5th reels. These are scatter symbols, and they sport the image of a Sunset along with a Scatter logo. Having the three symbols in view gets you 7 free spins. Should a wild appear on a Hotline, it will expand and cover the reel, remaining there until the free games are over.

Overall, I think that NetEnt did an excellent job with Hotline slot at offering some features that would make things exciting for the player. It’s just too bad that you have to pay so much to get them, though understandable since they’re so powerful.

The minimum bet that’s required of the player in Hotline will have him cover 15 active lines with a similar number of coins, despite the fact that 30 lines are actually offered. The level of the bet then allows you to select the number of coins for each of those 15 lines, taking it as high as 10. For the coin value, you are working with a denomination that will stop at a maximum value of $1. You can wager only $0.15 if you want to, but the option to spend $150 each round is also there.

The wager that I mentioned above covers just one Hotline. Should you wish to activate the second Hotline, the wager will double, going up to $300 now. Activating the third one as well will naturally add another full wager to the total, so you get to $450 this way. The minimum bet also changes, going as high as $0.45.

You will have enough opportunities to win big in Hotline, but it will be a result of the many expanding wilds that can appear, and not as much of the individual combinations that you’re forming. The best one offers 200x, or up to $2,000 per combo. For a round with 30 winning lines, you would get $60,000 in one go.

The fact that the game is very well thought out and that it will pay well is visible in the Return to Player percentage that NetEnt announced in its case, the figure is at 97.04%, a very generous number even by today’s standards.