Following the success of Irish Eyes, a game released in 2012, NextGen Gaming decided to create a sequel for it. Irish Eyes 2 came out in 2013, and it’s a slot machine that follows the same general lines as the original, with improved graphics for that period, along with a similar RTP, but a smaller top jackpot. The graphics improvements were certainly appreciated, but ultimately you’re playing on the same 5×3 reels with 25 active lines, and the changes made are going to be enough to get the fans of the original to try this one out as well, without alienating most players.

As far as major features are concerned, Irish Eyes 2 has implemented several that are worth mentioning: 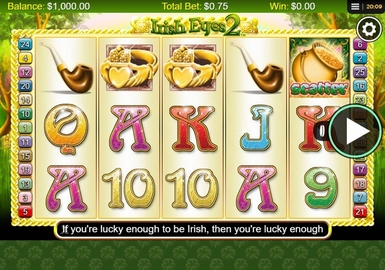 One of the more common choices of themes around, involving Ireland and its beautiful red-haired women, along with the legends surrounding leprechauns and their treasures, is what we’re seeing in this game as well. There isn’t much of a story here otherwise unless you want to count the legend of the leprechaun and his pot of gold as one.

Symbols will start you off with Royals initially, going from the 9 to the A. Then, as you get to symbols of higher value, you discover the Four-Leaf Clover, Pipe, Top Hat, Gold Ring, a Pot of Gold scatter and the red-haired Girl Wild.

I doubt anyone will be surprised at the quality of the design, given that this is a slot machine from 2013, but even though it’s dated, I wouldn’t call it bad looking. Fans of the first game will find that Irish Eyes 2 is an improvement in terms of design quality.

While they’re not all that matters in a slot machine, special features are often the salt and pepper that will make the gameplay palatable enough, that players might actually return to a game. Those included with Irish Eyes 2 are not unusual for a slot machine, but the free spins do provide it with a certain level of excitement, and overall the mix is a good one, even though quite commonly found in such games.

Wild Symbols: The most common feature symbol around, and the one with the greatest potential, the wild is the one showing you an image with a red-haired woman, often associated with Ireland.

It’s the only symbol in this game, that will pay in exchange for even a single appearance on the right reel, so it’s fairly easy for it to form its own combinations when things align just right.

On the other hand, wild symbols are not going to be as common as regular ones, and the reason is a simple one.

Not only are these to be used as substitutes that allow for all sorts of other combinations to be formed, but they also have the best rewards in this game, when creating their own wins. Up to 5,000 coins will be paid out on each line where wilds take over 1 to 5 positions, left to right.

It should be noted, that the Girl Wild is not a potential substitute for the scatter, which means that it can only be used in regular combinations.

Free Spins with 3x Multipliers: The promise of tripled prizes, along with the presence of free spins which don’t require that you invest even a single dollar, is one that many players will enjoy and appreciate having as the ultimate target in this game.

Activating the free spins will require that you have the Pot of Gold scatter landing 3, 4 or 5 times anywhere in view. In exchange, the game offers 10, 15 or 20 free spins, respectively.

Besides the free spins being triggered, scatters also have cash prizes to offer, whenever they appear 2 to 5 times. The cash prize will be a multiple of the round’s total stake, between 2x and 100x.

Once the free spins get going, you will find that all your wins inside are tripled in value, thanks to a persistent 3x multiplier. This even applies to the winning combinations formed with only wilds in them.

You do have the option to retrigger the free spins, provided that you land another set of scatter symbols, 3 or more is required, same as before.

Getting a spin started requires that you make a decision on the bet for it. Clicking on the Menu button will open up a new screen, which includes the option to place the wager, along with the path to reach the paytable.

Moving on to the top jackpot that Irish Eyes 2 promises, it actually appears to have been downgraded, compared with the original game. Rewards of up to 5,000x the stake are a possibility now, whenever you get the Girl symbols to take over all reels. You still have the 3x multiplier to apply to these wins during free spins, but as far as I can tell, there is a cap on how much you can take home.

Another important aspect to consider, related to the Return to Player of this game, is that the figure quoted is below the industry average. With 95.04% being the amount that the game is expected to pay back players on average, it’s doing worse than most of the new slot machines (usually at 96% or higher). While this doesn’t apply to the outcome of your own sessions, the odds are not as good as you would want them to be.

Verdict: For its release year, Irish Eyes 2 is a decent slot machine, with good features and payouts that many will want to get. At the same time, the RTP is not great for today’s players, the graphics are dated, and you get the same special features as in hundreds of other games.

Ultimately, it’s a game that I would recommend to players that have enjoyed the first slot with this name, and want to check out its successor, but it’s not for everyone.