Ivanhoe, an ELK Studios slot machine, appears to be themed around a historical novel that was published in the 19th century by Sir Walter Scott, a medieval knight type of story that had great success. While the idea of the Ivanhoe slot was a great one, the implementation of it is not quite to its level, and what we got here is a 3-reel slot machine with fruit icons for the most part.

Even though it delivers 3×3 reels, you get a total of 17 connecting lines from them, which is surprising for a game with this sort of layout. We’ve obtained several cool features as well, which don’t really match the layout, and those give us:

It might be medieval themed, but it’s not really visible in the design. You get a Crown that’s useful only half the time, you have a game logo as the bonus, but the others are fruits, Bar logos and red/blue 7s. The design is not much of an improvement over the look of other classics either. 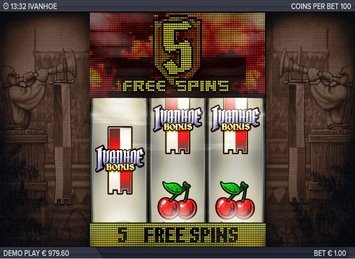 At its basis, what you have here is a slot machine with a classic layout and with action on the reels that mostly matches the look. You get 3×3 reels and 17 pay lines, so that’s higher than what you’re usually counting on in these games.

A Crown symbol, which is used on reel 2, will act as a blocker for the base game, since it doesn’t do anything useful there, but it will be transformed into a wild during the free spins.

The symbol that you’re after, the one delivering the feature, will have the Ivanhoe Bonus logo. The downside is that you don’t have a scatter here, only a bonus symbol that needs to appear on the three positions of an active line. If that does happen, the game will give you the bonus game and the 5 free spins that are associated with them.

Of particular interest to me in this game were the free spins and the way you advance through their levels. There are 5 levels in total, each one with its own extra free spins and with a limit in the number of coins that can be won. Once you’ve reached wins of that value, you progress to the next level, you get 3 extra free spins and a new limit to get to. You also have an increased multiplier. Additional free spins can also be won from each Ivanhoe Bonus symbol that appears.

ELK Studios has its own way of doing things, where wagers are concerned. Despite the presence of 17 active lines inside, it will use 100 coins for every single bet. Select the stacked coins button that’s available in the bottom left corner, to get the full range of bet values to choose from. Like in every other ELK title, there will be 12 options there, which start from a minimum of $0.20 and at their highest will be at $100. Since each bet has 100 coins in it, the highest coin value that you use is $1. The paytable tells you what prizes are offered in coins, not as a multiple of the line bet.

Betting Strategies are also available, and this is another area where ELK games tend to be similar, as they all offer this option. By selecting one of these Betting Strategies (only if you want to), you allow the game to varying your bet by a certain amount, depending on what’s going on in it. For example, Optimizer will allow you to wager only a fixed amount of the balance, so you could always have bets of 2% for example. Leveller is going to raise the bet after losing 5 consecutive rounds, while Booster will raise after each loss. Finally, Jumper will raise the bet after each win, until you get to a value of up to 10x the base bet, resetting after a loss.

Now, for the jackpot of Ivanhoe slot. The game will deliver a reward of up to 3,000 coins for the base game, and with up to 6x multipliers it will increase the amount to 18,000 coins per line. With 17 lines in play, the game promises that payouts of up to 300,000 coins are a possibility inside. That upper limit could mean a jackpot of $300,000.

Despite the flashy top jackpot, the game will pay at an honourable RTP of 96.3%, a figure that we’re disappointed if we don’t see in new releases. Of course, if it’s higher, then it’s even better.