The Jimi Hendrix slot is NetEnt’s newest title on the market and it has been much anticipated by fans of this rock legend. The software company’s 5 reel, 20 pay line title is a video slot that offers fans just a taste of the sort of performance that would have been given by this rock god when he was alive, and it comes complete with great soundtrack and some really unique graphics. Of course, the entire slot game is set on a stage, as if the player were attending a performance by the musician, and this really sets the scene for an exciting experience by NetEnt. 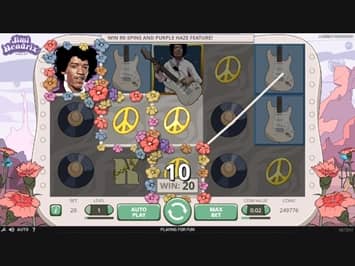 The Jimi Hendrix slot offers players so much more than just great graphics and an amazing soundtrack – the slot also boasts scatters, wilds and a jackpot of 400 coins. Players have the chance to bet 1 to 10 coins on each line, as well as between 0.01 and 1 in terms of coins size. This betting range should keep things interesting for those who enjoy spinning the reels on their new favourite slot game.

One of the things that make the Jimi Hendrix slot so exciting is the fact that this game is able to boast some really exciting bonuses. Firstly, players will want to watch out for the Jimi Hendrix symbol, since this represents the wild and can substitute for all other symbols in the game, except the scatters, of course. The symbol can also be a winning combination on its own, and when five of these symbols appear, players win 400 coins.

The Purple Haze feature is triggered when this symbol appears on the first real and it transforms the lower paying symbols into wilds for that spin. The Red Guitar re-spin feature is featured by the symbols of the same name, and these can be re-triggered. This feature is activated when 4 or more of these symbols appear on the reels.

The scatter symbol is represented by the rock legend playing his guitar, and when they appear on the third, fourth and fifth reels, it activates the Pick and Clicks feature. Players have to choose from among 4 prizes when this feature is activated, including a cash win, the Purple Haze feature, Crosstown Traffic free spins and the Little Wing free spins feature. Players need to match 3 prizes in order for them to claim the prize.

Players who are lucky enough to collect three of the Gold Coins will have a random multiplier awarded for their hard work. These multipliers range from between 8x and 30x, which is really exciting.

The various bonuses not only allow players an opportunity to win even more when they choose to spin the reels, but it also offers them a unique experience, which is a novelty in this day and age, particularly with so many slot games being created to look and play exactly the same. This allows this title to really stand out.

Players have to set their bet before playing, and this is done by choosing the coin denomination, which ranges between 0.01 and 1, and then chooses how many coins they want to bet per line. Players then need to choose the “max bet” or “spin” buttons to set the reels in motion.

Players have been looking forward to the Jimi Hendrix slot for a while, and now that it is here, they are most certainly not going to be disappointed. It might be the really great graphics, or it could be the unique and exciting bonuses, but there is something about this title that will entertain players for hours on end.