As far as classic slots go, you generally don’t expect them to be terribly unique or to have great features for you, and yet that’s exactly what Jumbo Joker slot by Betsoft ends up doing. It’s still a slot machine with a classic theme which involves more fruits and jokers than I’m comfortable with, but it has a Jumbo Meter feature as well, and that can improve the game for you.

At its core, you’re looking at an online slot which has 3×3 reels, and a total of 5 active lines set up on them. There are no real features involved, at least no regular ones, but the game is built around the idea of the Jumbo Meter. 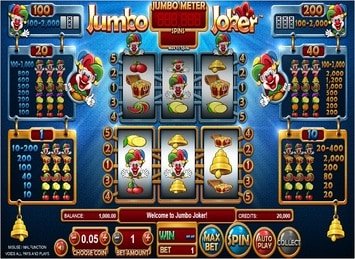 The theme that they’ve gone with is a classic one, so I doubt it’s going to give most players a good reason to try the game out for that alone. Once again, the Joker is going to be selected as the main character of a slot machine, while in other symbols we see mostly classics and fruits.

The base game paytables will display a total of six symbols, starting from the Cherry, then going to Lemons, Watermelons, Bells, Treasure Chests and Jokers.

The Jumbo Meter mode will have some of the same symbols, but it adds some new ones as well. The ones listed are the Cherry, Oranges, Lemons, Grapes, Watermelon, Bells, Red 7s and Jokers.

It’s a well enough designed game, for a classic that is. You wouldn’t be impressed with it as a fan of modern slots though. 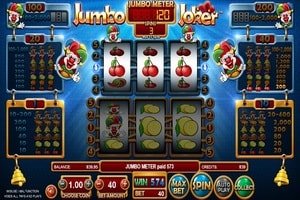 The game area of Jumbo Joker slot is surrounded by about six different paytables, telling you how much you can win if you place a bet of 1 or 10 coins in the base game, or 20 to 200 coins during the Jumbo Meter rounds.

You will not have any special features inside, so you need to just form winning combinations. The interesting bit comes from the slot’s Jumbo Meter, which I will explain below.

Whenever a winning combination of 20 or more coins is obtained in the base game, you get the amount added to the Jumbo Meter. From there, you have the option to Collect it, or you can risk it in the Jumbo Meter area, at one of the higher paying sets of reels. The symbols will also change partially, along with the value of the rewards that may come your way. The base game set is at the bottom, with its paytables to the sides, while the Jumbo Meter area is on top, also with 3 reels and with different paytables for them.

The first paytable section you see is on the bottom left side and it shows you how much you can win with a wager of 1 coin. There are six symbols on it, and their prizes will range from 10 to 200 coins. The Joker pays a random amount, of 10 to 200 coins.

The second paytable of the base game lists the same six symbols, on the right side. You have wins that go from 20 to 2,000 coins here, while the Jokers pay 20 to 400 coins. Basically, a win with a 10 coins wager guarantees you access to the Jumbo Meter section, if you’re willing to risk the money rather than Collect it.

Depending on the amount that you won, you might get 1 or more spins in the Jumbo Meter mode, and on different sections. There are paytables that tell you how much you win with wagers of 20, 40, 100 or 200 coins there. The ones for 100 or 200 coins give you spins that have only empty positions and Jokers.

The bets that you select for a round of Jumbo Joker slot will always have all 5 lines covered, but that doesn’t mean that you actually have coins for each of them. You select only a total bet for that round, and it has two potential values, 1 or 10 coins. Next, you may select the value for the coins, which go from $0.01 to $1. This gives you a betting range for the slot that is going from $0.01 to $10.

The Jumbo Meter requires its own wagers, which allow you to spend 20, 40, 100 or 200 coins for a spin, and this way it will give you access to different paytables and potential payouts.

If you look at the rewards, long-term the game promises to pay back 95% to the players, a figure that I consider on the low side, particularly if it’s compared with the offer made by other new slot machines.