Based on the similarly named film, which also launched in 2017, Justice League is a slot machine that was developed by Playtech. Creators of slot machines and other casino games, with great experience and one of the top companies as far as the share of the market goes, Playtech has an entire collection of such games. They’re all of the high quality, which is what I found in Justice League as well. The game features all the major superheroes from DC Comics that you also find in the film, so you get to see the actors that played them, just in a bit more cartoon-style form. The game area of this slot machine has 5×4 reels, along with 40 active lines.

As is often the case with their big productions, Playtech makes sure that we have plenty to do inside, and so it lasts a long list of features that we can explore: 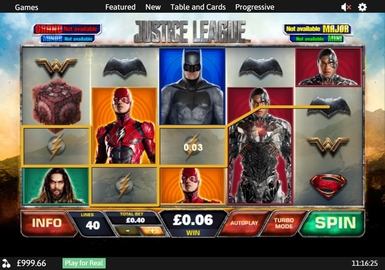 In Justice League, we find a slot machine which has a movie as inspiration, the way many do these days. In trying to take advantage of the film’s popularity, Playtech launched the game at the same time, and it made use of the images of the original actors for its top symbols. You find photos of the superheroes which are taken directly from the movie, along with their corresponding logos. The Flash, Aquaman, Cyborg, Batman, Wonder Woman and Superman, these are the main characters that the game was built around.

Quality-wise, I’m quite happy with what I’m seeing. Playtech managed the movie-based theme very well, and that’s not always the case with such slots.

The major features of Justice League are built around the six superheroes which appear on its reels. Each of these is another superhero that is part of the Justice League, and it can land stacked on the reels, even covering a full reel with 4 symbols at times.

Wild Symbols: These are the symbols that have the image of the JL logo on them, used as substitutes and contributors to the formation of new combinations. You may not use these to replace one of the scatters, only regular symbols. Their own wins will pay up to 750x on each line that they fully cover.

Super Hero Respins with Wilds: The Super Hero Respins are randomly triggered, so there isn’t anything that you can do, in order to get access to that side of the game. A feature frame is used, a fire border surrounding certain positions, which will transform superheroes found within, into extra wilds. It’s a respin, so there will be an opportunity to get additional symbols and wins.

There is even a chance that you will retrigger the respins, turning additional superheroes into extra wilds, eventually even all five of them.

Free Spins: In order to reach the game’s free spins, three scattered Cubes need to land, and they will do so on the 1st, 3rd and 5th reels. A selection screen appears then, allowing you to pick which superhero’s version of the free spins you prefer. Each one will use his power to transform regular symbols into wilds, in a different way. These options are unlocked in time, a new one being offered for each trigger of the free spins. Once you trigger the free spins six times, you have all options unlocked.

To retrigger one of the first four types of free spins mentioned below, you need 2+ scatters, and you receive 3 more rounds then. You can’t retrigger the Superman or Batman Free Spins.

The Flash Free Spins: This option gives you 15 free spins, where The Flash transforms superheroes into extra wilds if these symbols appear within the feature frame.

Cyborg Free Spins: With 12 free spins, Cyborg brings along the option to transform superheroes intro extra wilds, but it also adds the possibility of getting additional feature frames to other reels. For that to happen, you need around without any wild transformations.

Aquaman Free Spins: Aquaman’s option gives you 10 free spins, where any symbol that lands within the feature frame, gets turned into an extra wild wherever it appears next on the screen.

Wonder Woman Free Spins: From Wonder Woman, expect to get 7 free spins, with up to 5 feature frames on the reels for each round you go through. Any superhero symbols landing within those frames will be turned into wilds.

Superman Free Spins: Superman offers only 5 free spins, but it also has a huge 2×2 feature frame in place available, so the odds of superheroes landing there and turning into extra wilds are much improved.

Batman Free Spins: Finally, the most volatile option of all, with only 2 free spins, Batman will transform all Super Hero symbols into wilds, provided that at least one of them appears within the feature frame.

The payouts are impressive if you look at the four progressive jackpots that are associated with DC Comics, and which you actually can get from any of their branded slots, at random.

If you care more about the regular prizes that the slot is capable of paying, then 750x the stake appears to be the highest reward that can come your way, and that’s only if you cover the reels with wild symbols.

Though it’s a slot with progressive jackpots and high production costs, I’ve found the RTP of Justice League to be surprisingly decent, being set at 96.33%.

Verdict: In the Justice League, I discovered a slot machine that was very well designed. Playtech created a fun system of respins, free spins and stacked high-value symbols that can be turned into wilds with help from a special feature frame, so it’s not quite like the other slot machines. While its features aren’t very easy to trigger, there is a lot of variety in the types of free spins that you can get, and a sense of progression is also there since you keep unlocking new variants of higher volatility and potential.

While I can’t say the same about a lot of other slot machines with branded stories and progressive jackpots, I would recommend Justice League both to fans of the movie and to those that just want a good slot machine to play.