Review of Lara Croft: Temples and Tombs by Microgaming

Lara Croft: Temples and Tombs is the third game that Microgaming has released in this particular series over the years. They’ve used the help of a partner studio for this particular game, and so Temples and Tombs is designed by Triple Edge Studios, the same one that also created the Playboy sequel for them. Once again, we have the beautiful adventurer exploring tombs, this time a Mayan one, and finding treasures, by the looks of it. They came up with a setup which involves 5×3 reels, along with the 243 ways to win that Microgaming has made famous over the years.

If we look at everything else being offered, the features are going to be noteworthy as well: 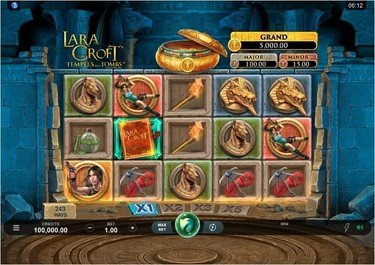 Probably inspired by Indiana Jones, at least in part, Lara Croft is a lovely female adventurer and explorer, which you see in various locations worldwide, ranging from Egypt to South America. She’s typically armed with two handguns, so it’s not quite the peaceful nature of Indiana Jones, but as she got her start as a video game character, that’s completely understandable.

In this particular game, they chose to place the action in a Mayan temple or tomb, a place filled with the past treasures, as you can see from the background image. They created a good design for Lara Croft: Temples and Tombs, using all-themed symbols, none of those boring Royals or card suits that seem to pop up in every game these days.

Moving on to the list of symbols, it includes the Lara Croft book, Gold Coins, about four different icons with Lara Croft in them, and icons with stone statues, water bottles, backpacks, grapnels and torches.

Whatever features appear here, are not unique or unusual, they’ve been around for some time. They’re still exciting though; it’s the kind of effect that multipliers have on gameplay.

The game’s wild symbols are shown as gold coins with the scarab beetle on them. These you get to show up on reels, and if they can participate as a substitute in some new win, they will do so.

An even better side of the game will come via the Rolling Reels mechanic, which brings increasing multipliers with each new cascade that is being triggered. To trigger a cascade in the first place, you need a winning combination. The symbols involved in the win get removed, a new wave of symbols comes in to replace them, and additional wins and cascades may result from this. Simultaneously, the game has an increasing multiplier, going up by 1x for each new cascade. The highest you can go is 5x with this multiplier. Once the Rolling Reels cascades stop, the multiplier resets, so you start the next paid spin with it at 1x.

Free Spins With up to 15x Multipliers

You get scatter symbols in this game, and they can be used whenever they appear once per reel, and on at least three reels. You trigger anywhere from 8 to 32 free games, using three to five scatters. Once in, the feature can be retriggered, while using the same three or more scatters.

In the free spins, the multiplier triples, so rather than 1x to 5x boost to wins, you get 3x to 15x (taking the cascades increases into account as well).

The final option comes from the Jackpot bonus, which you reach random, but with a better chance at it if you get enough wilds collected along the way. Up to 5,000x, the stake is paid by the fixed jackpots of this feature.

Thanks to 243 ways to win, you get a lot of chances to form winning combinations. Once you get them, there is a chance that the Rolling Reels mechanic has brought in some juicy multipliers, up to 5x in the base game and 15x during free spins. With combinations paying up to 50x the stake, you end up with an awesome potential top payout once you add the multipliers and ways to win. Microgaming cut that down quite a bit, but even with the 5,000x that the game is allowed to pay at most, Lara Croft: Temples and Tombs does quite well. Its prizes’ actual cash value will reach a maximum of $100,000, using relatively low maximum bets.

I’d note here that the game is considered a High volatility title, but at the same time it manages to keep the RTP at 96.05%, so all in all this isn’t bad at all.

Verdict: Enjoyable graphics, a beautiful and strong female adventurer that many players have loved in the past, big top payouts, and at least a decent RTP, these are all ingredients for a successful slot machine. Microgaming has a good slot on their hands with this one, and I think you should give it a try, particularly if you grew up with Lara Croft, either in the video game, movie or slot machine form.