The recipe for a good game will often start with a story that people can resonate with. Whether the developer goes for an actual story, or with a hobby, or even a hot beverage that people love, it depends on what they want to achieve. With Le Kaffee Bar, we are getting a coffee themed slot machine, and given people’s attachment to this beverage, it’s understandable why Microgaming and All41Studios went for this one. While the implementation is not the best I’ve seen around, the game and its 5 reels with 243 ways to win still have some good things to offer.

Among the things that are notable here, I would like to mention: 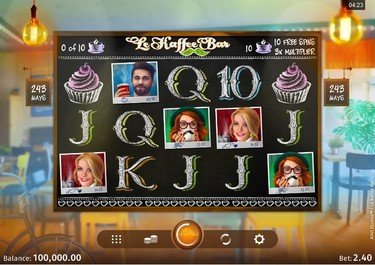 Le Kaffee Bar is inspired by coffee, and the action takes place in a coffee shop of some kind. It relies on images of several characters found inside, such as the girl, guy and barista, there are cupcakes, coffee jugs and half a dozen Royals. They mostly designed it as if it were done in chalk, and I don’t think it looks very good because of it. For a fan of coffee, it doesn’t look like terribly appealing design, and for me, it was one of the weakest points of the slot.

If you love playing a coffee-themed game, you will appreciate this slot machine, but the features and everything else about it must manage to keep your interest. I’m not sure if this game succeeds completely, but you can tell that it’s trying.

Before getting to the major features, I’d first like to mention that there are stacked regular symbols which will appear on the reels. It’s the high-value symbols that will do that, the ones showing you characters from the coffee bar. 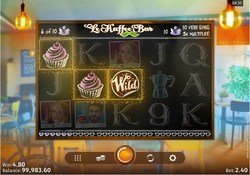 Wild Spin Again: You will discover a bonus feature here, which requires that you get three symbols of the same type in a row or column, next to each other. Having a stacked symbol cover a full reel would work, to get you the Wild Spin Again.

The next step is for the middle symbol to be transformed, turning into a wild which you keep around for the one spin. This might get you a new winning combo, but it’s not a guarantee.

Any wild symbols that may appear on the reels of Le Kaffee Bar, will be used as substitutes, helping form winning combinations together with others in their vicinity. 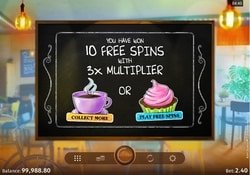 Free Spins with Multipliers: The Coffee Mug symbol is acting as the scatter in Le Kaffee Bar. You use these symbols when they land on the 1st and 5th reels, and whenever they show up you get to collect them. They are added to a special collection meter, which requires at least 10 to be brought in before you win the free spins. The game gives you the option to keep playing and collecting these scatters, to get a better multiplier and more free spins.

The options start when you get 10 scatters collected, which would bring you 10 free games and a multiplier of 3x for all wins.

If you hold on, and you get to 20 collected scatters, you can trigger 15 free games, along with a 4x multiplier.

As for the final option, it requires 30 scatters to be collected in the meter so that you can get 18 free spins and a 5x multiplier applied to wins.

The fixed part of the wager is going to give you 30 coins, to use for every spin, no matter how small or big the bet gets. You get to vary the amount going to each spin, between $0.30 and $30. Given the number of coins available, we can calculate the line bet, as it goes from $0.01 to $1.

One of the things that I think Le Kaffee Bar gets right, the top prize inside is going to reach a maximum of about 2833x the round’s stake. It means that a jackpot of $85,000 is a possibility while you play it, and that’s a decent return for a slot like this.

As a slot machine with low volatility, Le Kaffee Bar doesn’t drain your balance quickly, and winning is possible often enough with it. As such, a payout at that level is pretty good, and we’ve seen other games that pay even 10x less in their top jackpot, at the same volatility level.

Finally, we know what the RTP is like in Le Kaffee Bar, and at 96.51% I think it’s doing pretty well.

Verdict: Le Kaffee Bar is a game dedicated to coffee lovers everywhere. I for one am not a fan of its design, it’s more of a miss than a hit in that regard, but for those that are into low volatility games, it could work on other grounds. It has decent top prizes to pay, several features that help make it just a bit more exciting, and the RTP is even higher than in a lot of other slots. Overall, I’d say it’s the type of game that fans of coffee might want to check out, but it’s not something that you absolutely must try out.