Review of Leprechaun Goes to Hell by Play n GO

Leprechaun Goes to Hell is just one of the three slot machines that Play n GO has designed with the same theme. In each one, we have the leprechaun in a certain setting or travelling to a different destination. The other two games released so far had him go Wild and to Egypt, but here he’s getting to a more exotic spot, Hell itself. There is plenty of fire to go around, along with attractive She-Devils and huge top rewards. You get to play by spinning 5×3 reels which have 25 paylines active at all times.

Now, the extra spice, in this case, is provided by the slot’s major features, and those come in the form of: 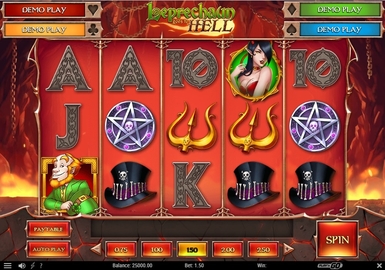 Each of the games launched in this series will use a Leprechaun as the main character. He’s gone Wild before, to Egypt, and to Hell, so he does appear to be quite fond of warm places. A fiery themed background is shown behind the reels, with the symbols present on them mostly revolving around hell and death in some way. The low symbols get Gothic-looking Royals, while feature and top ones have Eveline, the Leprechaun, a Pot of Gold, Top Hats, Five-Point Stars, Tridents and Poison bottles.

Quality of the design is not an issue, everything’s been done with attention to detail, even the Royals which are typically not very interesting. The same high-quality design is expected of most Play n Go slots though, even those that are a bit older, like this one.

If you look closely at the major features that the game has implemented, you will not find anything here that innovates, and yet it’s important to sometimes see things being put together in a different way. That’s what Leprechaun Goes to Hell does, it uses its wilds, scatters, free spins and multipliers in a different way, so they’re still fun to get and use.

Leprechaun Wilds: For one, the game delivers at times Leprechaun Wilds on the reels. These are substitutes then, which will try to form winning combinations, either with regular symbols (acting as replacements) or on their own (creating their own wins and paying up to 120x the stake). When combined with the Evilene wilds, these substitutes apply 2x multipliers to the lines that they’re on.

Evilene Wilds/Scatters: There is a second major symbol to be found on the reels of Leprechaun Goes to Hell, and that’s the gorgeous She-Devil, called Evilene. Usually, you rely on her to be a wild symbol, at which point it can help any regular symbol form a combo. As mentioned above, Evilene can be combined with a Leprechaun wild, to apply a 2x multiplier to a win line.

The same Evilene icon will also act as a scatter though, provided that she lands three times in view. The Infernal Bonus triggers then.

Infernal Bonus: Via Evilene scatters, appearing 3 times, the game can trigger a special feature called Infernal Bonus. You then get to play through several free spins, where you have only 3×3 reels at your disposal. Get extra Evilene symbols then, to obtain additional infernal spins. This new mode gets only 5 active lines, and there are five regular symbols present, which can form combinations and pay up to 10x the stake.

The game also mentions that the higher the bet being used, and the higher the temperature meter goes, the better your chances of triggering one of the progressive jackpots.

Free Spins with Multipliers: There is one more scatter symbol that you get to use, and that one shows up as a Pot of Gold. Land it 3, 4 or 5 times, anywhere as long as they’re all visible, and you win 3x to 50x the stake, and trigger 10 free spins.

You start off with a 2x multiplier, which will apply to all wins. Get additional sets of 3+ Pots of Gold to appear, and the multiplier goes up by 2x. There is an upper limit to how high it can go, and it’s 10x.

It’s not a very expensive game to play, as you’re about to find out. All its betting options are listed at the bottom, and they are designed to use 25 coins. That’s the reason why the minimum bet is asking for $0.25, because you need to put in at least $0.01 towards each of the game’s 25 lines. The number of coins remains the same as you boost the bet, and so you get to spend up to $5 total, while the line bet receives $0.20.

Designing a slot machine that pays big, and yet doesn’t have a huge degree of risk for most players, is not something that everyone can pull off. I like what Play n GO managed with this one though. They describe it as a game with “only” Medium volatility, and yet it is capable of offering wins of up to 250,000 coins ($50,000, or 10,000x the stake) in a single spin.

You might need to retrigger the free spins a couple of times, before you get to a point where there are 10x multipliers and the potential to get that much from its best combinations, but the possibility is there.

They even add four progressive jackpots to the mix, which you can trigger via the Infernal Bonus. Here, your odds of getting one of the four jackpots increase with the size of the wager that you’re using.

Finally, it’s a game with a 96% Return to Player, as average of a number as it gets, but good enough for a modern slot machine.

Verdict: Leprechaun Goes to Hell is a game that appears to tick all the right boxes. It has excellent graphics, interesting features, low enough volatility that most players will give it a chance, and yet big enough prizes that even veterans could be interested in it. Mix in both progressive jackpots and rewards of up to 10,000x, and there is plenty for its players to look forward to.

Now, whether you find the Leprechaun theme interesting or not, that might be one thing that you can be annoyed with since the character is overused in slot machines. Even then though, it’s mixed in with that Hell based theme, and offers you something different and interesting.