Like many of the other slot machines, you will see released by Novomatic, Lucky Lady’s Charm Deluxe slot has been initially a land-based game, but which has been brought to online casinos. This is one of the three Lucky Lady’s Charm titles that were released, each one different from the others in a couple of ways. Obviously, you get a luck themed slot machine here, which has huge potential through its individual winning combinations.

Now, getting back to what Lucky Lady’s Charm Deluxe slot has to offer, there is a layout here that uses the regular 5×3 reels, which offers up to 10 active lines, while feature-wise the game will have: 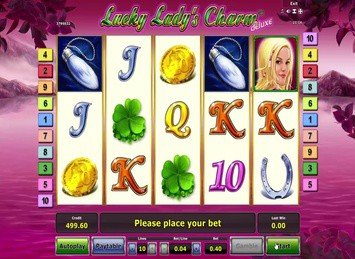 Theme-wise, Lucky Lady’s Charm Deluxe slot is telling you right away what it has to offer. It’s got a luck related theme with lucky charms present on the reels, but with plenty of boring playing cards for symbols as well. For its feature symbols, it will have the Lucky Lady and the Crystal Orb. High-paying positions are occupied by rabbit’s foot, a ladybug, lucky horseshoes, lucky coins and four-leaf clovers.

The graphics quality is decent, which is not that bad of a word to be used for a slot that’s based on a land-based game. There are things that could be improved inside, but there are good areas as well. 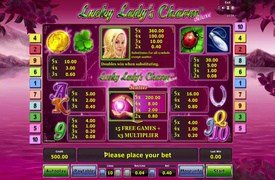 While you shouldn’t expect unique features to be offered in this game, what you get from it is going to be a solid choice. It’s the multipliers that make the features exciting because otherwise, they would be fairly average.

For starters, we will take a look at the Lucky Lady symbol. It’s giving us an image of a cute blonde woman, with jewellery in her hair. Not sure quite what makes her lucky, but the features that the symbol delivers do look exciting. The role it fulfils is that of the wild feature, which as you’d expect can be used whenever a player has several other regular matching icons next to it so that they can form a combination together.

That’s not all that you can expect this wild to do though. Every single winning combo that it forms with regular symbols, will be worth double the original amount, as it applies its 2x multiplier to the win.

When you get it to form a combination by itself, it will do that by appearing 2 to 5 times on a line, and with its symbols arranged left to right. Payouts of 9,000x can be yours this way, with as much as $90,000 paid out in the base game.

Only one other symbol is used in this game to give you a feature, and it’s a scatter that both pay very well and triggers free spins. Having two to five Crystal Orb scatters somewhere in view will mean that a reward between 2x and 250x the bet will be yours that round.

Activating free spins is possible when you have at least three of those Crystal Orbs scattered. At that point, you are taken to a feature with 15 free spins, where wins are multiplied by 3x. You may trigger the free spins again, even as you’re already inside.

You have only a couple of betting options that you can play with, as you’re finding the bet value with which you’re comfortable. You may vary the number of lines for one, and so you rely on 1 to 10 and you have to use 1 to 10 coins as well. The other option lets you pick an amount for each line, and its range is going to be $0.04 to $10. Depending on the way you’ve set up the two options, the full range of the bet is $0.04 to $100.

One of the things that make Lucky Lady’s Charm Deluxe slot one of the most popular titles in Novomatic’s collection would be the potential payouts that it can deliver. For starters, combos of five wilds will pay as much as 9,000x, or $90,000. If that same combo is formed during the free spins, the value of the payout triples and you could get $270,000 from just one active line.

RTP wise, I’d say it’s fairly typical for a game from Novomatic, though they have some that do better. In this case, it’s at 95.13%, but it’s still incredibly popular due to its potential and its link to the land-based variant that many know from regular casinos.