Lucky Little Gods is a Microgaming release, their first one for 2018, and it already looks like a strong start for this developer. The idea that they came up with was of a game that’s based on the Chinese gods, the ones that we’ve seen so many times in other slots, but with a twist that comes in the form of the design style. It’s an Anime style design, with the gods looking like tiny cartoon characters, a look that will be familiar to a lot of players that enjoy the genre.

Moving on to the gameplay system that was implemented in Lucky Little Gods, what you’re going to see here is a standard system with 5 reels, 3 rows and 243 ways to win. Looking at the features that Microgaming picked for it, you get: 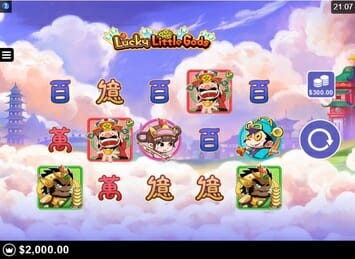 The theme of Lucky Little Gods has a Chinese influence that is quite clear, and I’m not saying that just because you see the gods as characters, or because there is Chinese writing instead of playing cards. The Anime style design is also typical for animation series from that part of the world, and though it’s unusual to see in a slot, it’s not a bad look for it.

With a mobile-friendly design being used inside, Lucky Little Gods has a special button that allows you to access the betting options. You have two values at work there, called Bet Size and Bet Value. These aren’t standard options in most slots. You get the former in a range of $0.30 to $150, which appears to use $0.01 to $5 per line. Bet Value is a bet multiplier, which goes from 1 to 10. At the highest setting that you can access, you can use a bet of $1,500 per spin ($50 per line).

Due to the game’s high potential wagers, there are also big jackpots to be won, even though their multiplier isn’t particularly impressive. For example, one of the game’s features will deliver rewards as high as 100x total bet, which could mean $150,000 cash. Regular combinations pay at most $75,000. We also know of this game that it has the RTP set at 96.75%, an excellent figure for most slot machines, though not the highest you will see.

Whenever you sport the Lucky Little Gods logo on the reels, know that you’re looking at the game’s wild feature. It’s going to be usable as a substitute whenever regular symbols require it, but otherwise, it is of no use to you when it comes to feature triggers.

Next on the list of interesting features would be the scatter, the one sporting the image of two firecrackers themed characters. You want these present in as many positions as possible, on three to five reels being needed so that you can get their 8 free spins. The first and last columns are going to be completely wild, the other three getting regular symbols. Each new scatters of this type that you see land will add one extra free spin to the total.

The list of unusual characters continues with the second scatter, which has the image of the Money Tree on it. Landing these on the reels 1 and 5, you get from them a feature where coins start pouring down from the trees. A single spin can get you up to 15x total bet from this feature.

It doesn’t stop there, and the list of features continues with a third scatter, the last one that you will see. It’s reserved for reel 3, and when it appears you can get a coin prize that is the biggest that the slot can deliver, up to 100x total bet.

It’s no wonder that the game has such a good average RTP to offer, as it’s filled with features that will keep things fresh. There are even random features to be had, called Little Gods Bonus, triggering only during non-winning base game rounds.