Review of Magic of Sahara by Microgaming

Relying on a fairly simple game area, Magic of Sahara will tell us a story which revolves around the trading caravans travelling over the Sahara Desert. A game which is available via Microgaming, designed for them by All41 Studios, Magic of Sahara slot has its share of downsides, but at the same time it offers a good top payout, and that might convince some. While playing this game, you’re getting only 5 regular reels, of 3 symbols each, along with 9 fixed paylines.

Among the better features that are coming with Magic of Sahara slot, there will be several decent options, such as: 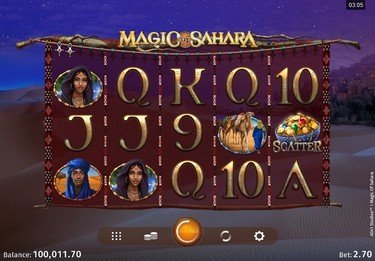 Trader caravans have travelled over the Sahara Desert in the past, and they’ve been doing it for thousands of years, despite the hardships that came along with it. While not the type of theme to be extremely popular, the Sahara Desert has been immortalized in slot machines before, so it’s not a completely new story for us. You’re going to get the Microgaming/All41 Studios interpretation in this case.

For starters, it doesn’t look like the sort of slot machine that you’d call modern. I haven’t seen great looking symbols or background pictures, and while some of the higher paying positions do look fine, none of them will make you want to play the slot no matter what else is offered.

The background image will rely on the image of the desert and that of a city found in an oasis. Moving back to the reels, those have an almost tribal look to them, looking like they’ve been woven together by the locals.

Symbols include Royals initially, of lower value and sporting a golden colour. You then get to the symbols of the caravans, traders and beautiful women, along with bowls of gemstones and the game logo. Overall, it’s the expected mix of symbols, and at an average quality for the most part.

When it comes to its major features, Magic of Sahara slot doesn’t do all that much, to get the player’s interest. The features revolve around options that we’ve seen in similar forms before, in most slot machines. 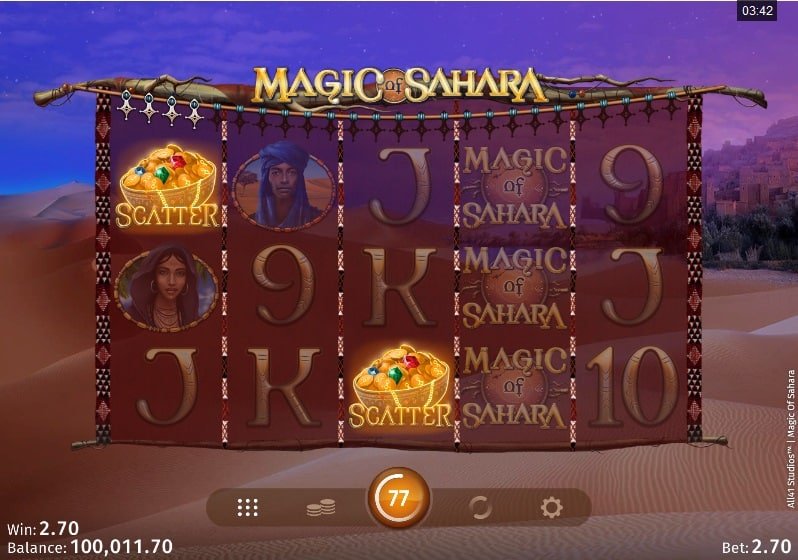 The wild symbol comes either regular-sized or super-stacked, but there is only one icon used in both cases. The super-stacked wild symbols are the ones you find on the 3rd or 4th reels, while the regular versions are reserved for the others. They can help form all sorts of regular combinations, being used as substitutes when positioned correctly. Also, have several wilds (up to 5) on the same line, and lined up, to create their winning combinations. The wild symbol is responsible for triggering the slot’s biggest wins, of up to 1,200x (up to $6,000).

The second major feature symbol that Magic of Sahara slot relies on, the scatter takes the form of a Bowl of Gemstones. You will find that it can land on all five reels.

Should the scatter symbols appear 3, 4 or 5 times in view, the game will give you 25 free spins and a 2x multiplier to help boost any wins you trigger inside. Before you start using the free spins, you also receive a prize, between 3x and 100x total stake, depending on how many triggering symbols there were.

At this point, the game’s potential doubles, from 1,200x total stake to 2,400x total stake. You do need a full screen filled with wilds though, to reach this level.

A second way of triggering the free spins exists. You just need to collect Magic Tokens, from symbols with the Caravan Traders, to eventually reach this stage.

The requirement, for all players that want to give Magic of Sahara a chance, is for their wagers to be designed so that they cover all available paylines. Since 9 active lines are used, you need to have 9 coins in your bet. While it’s the total bet that changes, in a range between $0.09 and $45, the coin value or the line bet is the one that is modified, not the number of lines. You spend between $0.01 and $5 on each line.

Looking at the potential rewards that Magic of Sahara can deliver, going as high as $108,000 for the free spins, or $54,000 in the base game, we see that it’s capable of returning the round’s bet at a 2400x multiple. It’s not a bad return, especially for a game with medium volatility, which is not as risky and therefore not as likely to have long losing streaks.

It’s all good so far, but this next part is the one that many will not like. The RTP for Magic of Sahara is calculated at a below-average 95.29% and considering everything else that we know about this game, it is a major disadvantage.

Verdict: While I believe that some players might enjoy many things about Magic of Sahara, including here the mix of medium volatility and payout potential, or the Sahara trading theme, there will also be several others that are major downsides. I’d mention here the quality of the design, along with the 95.29% RTP. Overall, it doesn’t look like a game that players would be returning to.